Searching for elephants
and finding an Olympic
medallist in Charleville 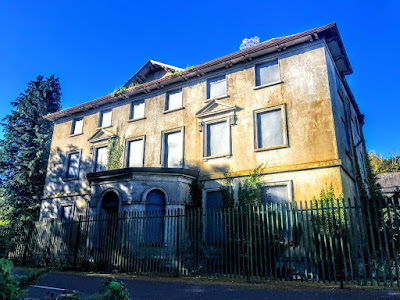 Charleville Park was turned into flats in the late 20th century, but is now derelict, boarded up and fenced off (Photograph: Patrick Comerford, 2018)

Charleville is a busy market town in North Cork, close to the border with Co Limerick. I spent the morning there yesterday [27 September 2018], in in the heart of the rich farming area known as the Golden Vale that spreads through Cork, Limerick and Tipperary.

The lands around Charleville bought in the late 16th century by Richard Boyle (1566-1643), 1st Earl of Cork and one of the most successful Elizabethans in Ireland. His third son, Roger Boyle (1621-1679), Lord President of Munster and 1st Earl of Orrery, founded the town of Charleville in 1661 and named it in honour of the recently-restored King Charles II.

Charleville became the centrepiece of a vast estate owned by the Boyle family. The town was laid out in a formal plan with two parallel wide streets. It was granted a charter in the 17th century with a sovereign (mayor) and two bailiffs elected annually by the 12 burgesses or town councillors.

The principle Boyle residence was Charleville House, built in 1668 and set in a vast deer park north of the town. It was regarded as one of the finest houses in Ireland at the time. It occupied one side of a large walled court and could be defended with 16 guns.

However, during the lifetime of Lionel Boyle (1671-1703), 3rd Earl of Orrery, Charleville House was burnt down by Jacobite forces under the command of the Duke of Berwick, after he had dined in the house in 1690. The house was later demolished and nothing remains of it today. All that remains of the ‘notable gardens and fine park’ are symmetrical fields, masonry walls and earthworks, including the site of four fish ponds.

Although the Boyles remained the lords of the manor, William Sanders of Charleville leased The Park ‘for ever’ from the Boyles on 20 September 1697.

The Sanders estates expanded through intermarriage with the Knight family, and in the late 18th century Christopher Sanders built Charleville Park, which was also known as Sanders Park.

Like many Irish towns, Charleville went through a period of rebuilding in the late 18th early 19th centuries and most of its elegant streetscape dates from this period, along with the many side lanes that gave access to the areas behind the streets.

Charleville became an important market town with a weekly market on Saturdays and six fairs during the year, and with a number of industries, including tanyards, flour mills and a blanket factory.

By the 1870s, he owned 1,024 acres in Co Cork and 942 acres in Co Limerick. A barrister, magistrate and landowner, he was boycotted by the tenant farmers in Charleville, who refused to pay the rents. It was said, ‘Not a blacksmith could be found to shoe his horse and not a living creature to cook his food.’

Robert Massy Dawson Sanders, a land agent, inherited Charleville Park from his father in 1892. He was an elder brother of Evelyn Francis Sanders (1864-1909), who in 1903 married Maria Elizabeth Coote Townshend (1865-1942), who was born in Ireland, and they lived in Calcutta.

Robert Sanders was educated at Trinity College Dublin and was High Sheriff of Co Cork in 1901. He managed the family estate at Charleville Park and a number of other estates, and in 1916 he inherited the Ballinacourty Estate in Co Tipperary from his mother’s uncle, Captain Francis Evelyn Massy-Dawson, a retired naval officer.

During the Irish Civil War, the anti-treaty Republicans occupied Ballinacourty House, but on the approach of Irish Free State soldiers the Republicans burned the house and made good their escape.

Ballinacourty House was never rebuilt, but the stables have since been restored as Ballinacourty House Restaurant. Robert Massy Dawson Sanders later rebuilt and extended an old school house and opened it as an hotel and convalescent home. The Glen Hotel now stands on the site.

During the Irish Civil War, Robert Sanders moved to Buckland Court in Surrey, which was owned by his elderly father-in-law, Francis Henry Beaumont, who transferred the estate to Sanders in 1923. Later, around 1932, Robert Sanders built a lodge on the Ballinacourty Estate where he could stay when he was in Ireland; the Aherlow House Hotel stands there today. 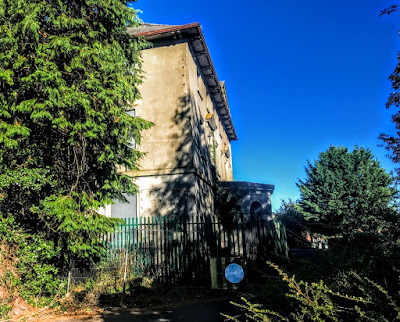 Robert and Hilda Sanders were the parents of two sons, Charles Craven Sanders (1899-1985) and Terence Robert Beaumont Sanders (1901-1985), who were born at Charleville Park and educated at Eton and Trinity College Cambridge.

Charles Craven Sanders lived at Coolnamuck Court, near Carrick-on-Suir, Co Tipperary, up to the mid-1950s, and later lived in Whitechurch, Rathfarnham. His brother Terence was an Olympic gold medallist and a lecturer in engineering in Cambridge.

Terence Sanders was born at Charleville Park on 2 June 1901 and was educated at Eton and Trinity College Cambridge. At Cambridge, Sanders, Maxwell Eley, Robert Morrison and James MacNabb, who had rowed together at Eton, made up the coxless four that won the Stewards’ Challenge Cup at Henley in 1922 as Eton Vikings and the Visitors’ Challenge Cup as Third Trinity Boat Club.

Sanders stroked for Cambridge in the Boat Race in 1923, which was won by Oxford. The coxless four won the Stewards’ Challenge Cup at Henley again in 1923, the crew won Stewards’ at Henley again in 1924 and went on to win the gold medal for Great Britain rowing at the 1924 Summer Olympics in Paris. The British crew won comfortably over the 2000 metre course and winning, with Canada finishing second and Switzerland taking the bronze medal.

Sanders became a Fellow of Corpus Christi, Cambridge in 1925, and was appointed university lecturer in engineering in 1936. He was honorary treasurer of the University Boat Club from 1928 to 1939, and was in the Leander Club eight that won the Grand Challenge Cup at Henley in 1929. In 1929, he co-wrote The University Boat Race: Official Centenary History 1829-1929.

During World War II, he was active in Operation Crossbow that countered the threat of German V2 rockets. He was made a Companion of the Bath (CB) in 1950, and retired from the army as colonel in 1951. Sanders died at Dorking, Surrey, on 6 April 1985 at the age of 83, and is buried in Buckland churchyard near Reigate.

When I visited Charleville yesterday [27 September 2018], the house was derelict, boarded up and fenced off. But an unusual octagonal gate lodge still stands near the original entrance to the house and demesne.

This two-storey gate lodge was built around 1830, with one-bay faces. The projecting slate roof forms a shallow canopy at the entrance face, with carved timber bargeboards supported on carved timber brackets. There are rendered chimneystacks, rendered walls, square-headed openings with quarry glazed transomed and mullioned windows and rendered sills. An elliptical-headed opening has a raised brick surround and a timber panelled door.

I had wondered whether I would find any clues at Charleville Park about the choice of name for Fort St George nearby. After all, the Sanders family coat-of-arms has three elephants’ heads on the shield and an elephant’s head in the crest, and Evelyn Sanders and his wife Maria were living in Calcutta in the early part of the 20th century.

But Calcutta was too far from Fort St George and too late a connection to explain the name, and the elephants’ heads provided no clues at all.

Instead, there was another link with Fort St George, as I imagined Robert Sanders as a regular visitor as he rowed for Cambridge or walked along the banks of the River Cam.

At the time Sanders rowed for Britain in the 1924 Olympics, it was a matter of chance rather than choice whether Irish Olympians were categorised as Irish or British, and his opportunities came from his experiences at Eton and Cambridge. But Robert Sanders should not be forgotten as an Irish-born Olympic gold medallist. 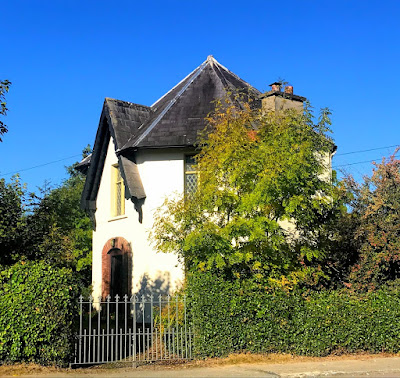 Thank you for posting this, Patrick.

The Sanders of Charleville Park aka Sanders Park are my lot. Evelyn Francis Sanders (1864-1909), who in 1903 married Maria Elizabeth Coote Townshend (1865-1942), is my Grandfather. However Maria, who was always known as Mynie, was born in Ireland, not Calcutta - I would be glad if you would make the correction, in case the mistake gets propogated further.

Evelyn was a civil engineer educated at TCD and went to India as a young man to build railways for the Bengal Nagpur Railway. Mynie followed him out to Calcutta. He retired on health grounds and died in 1909, leaving her a widow when my father was 3 years old.

In February 2017 I visited the old BNR Headquarters in the Calcutta district of Garden Reach still known as BNR Colony, now the headquarters of the South Eastern region of India Railways. The staff there are very proud of their railway and its history, and greeted me vey warmly. My grandfather is named on a brass plaque in the grand entrance as Chief Engineer when the headquarters building was opened.

Correction made Joc, thank you for pointing this out. I never realised as I was looking at the house that there was this connection ... I should have realised. Patrick

Thank you, Patrick. It is sad to see the old house in the state it is in now. It has a new roof, no doubt because it is a protected structure and the county council insisted. But windows have been left open to the elements and the stairs and ceilings are down. I expect the owners are waiting for it to be declared a dangerous structure so that it may be demolished.

I live in Charleville and have an interest in local history and was interested when I came across this blog which I very much enjoyed reading. I notice various old buildings throughout the town, including this house.

As of 2021, there’s currently a planning application for housing on land located behind the house. I notice the County Council has requested further details to be taken into consideration concerning the architectural heritage of the house and surrounds, including a “masterplan that includes the refurbishment and reuse of the Protected Structure and outbuildings”. So I believe the house will continue to stand, although more land is being sold off which will further devalue the context of the site. Link to planning application with documents (http://planning.corkcoco.ie/ePlan/AppFileRefDetails/206603/0).

I don’t know when the estate was originally sold, but I believe it was acquired by the Binchy family, then the Heffernan family in the 1950’s. Based on some brief research I did, I understand it was eventually sold again in the 1970’s and carved up into different lots. The grounds of the house were of course demolished for a housing estate in the 1970’s and 1980’s. I don’t think such planning decisions would be granted in the 21st century. I would love to see what the house and grounds looked like before the above happened and also the interior of the house, but I’ve only ever found one or two photo’s to my disappointment.

I imagine the original owners would be slightly “dismayed” if they saw the condition of everything now - grounds demolished and a housing estate built to the front door of the house. The grounds of old houses are as integral as the house itself, it’s a pity nobody had the good sense to just leave it be and build elsewhere (there’s not exactly a shortage of land around the town…).

Perhaps if the Council had acquired the entire estate when it was sold, it could have been preserved, similar to the Doneralie Court estate also in North Cork. Maybe that would have been a satisfactory outcome for preserving the past and a way of life that is now of a different time. James.

There is a photo of Sanders Park in its heyday here:
http://landedestates.ie/LandedEstates/jsp/property-show.jsp?id=3829

There is a photo of Sanders Park in its heyday here:
http://landedestates.ie/LandedEstates/jsp/property-show.jsp?id=3829