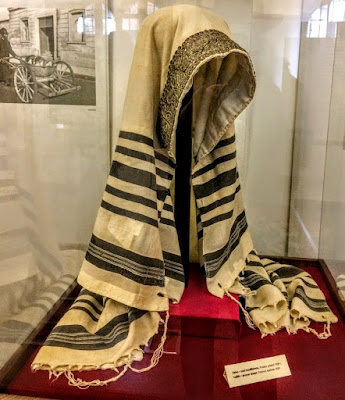 A tallit or prayer shawl in the Jewish Museum in the Old Synagogue, Kraków … the number of knots and fringes represent the 613 commandments in Jewish law; but which is the most important? (Photograph: Patrick Comerford)

One of the Gospel passages I have been working on this week is the Gospel reading Sunday 4 November 2018, the Fourth Sunday before Advent (Mark 12: 28-34). Working on this reading brought new insights into the significance of the tallit or traditional prayer shawl worn by pious Jews at prayer.

The setting for this reading is the Temple in Jerusalem, where Christ is teaching in the Temple in Holy Week, where the Chief Priests, the scribes and the elders have challenged his authority to teach (Mark 11: 27-33), where he has been challenged by some Pharisees and Herodians (Mark 12: 13-17), and where some Sadducees question him also (Mark 12: 18-27).

Now it is the turn of Scribes. A scribe who has overheard all these questions, answers and arguments. He is impressed by Jesus’s answers and the way in which he has avoided falling into the traps. This scribe has a question of his own, but he is asking genuinely without seeking to set another trap for Jesus.

In New Testament times, the scribes are usually Pharisees, although not all are Pharisees (see Matthew 5: 20, Matthew 12: 38). They support but sometimes also supplement the written law with their traditions (see Matthew 23: 2). In the Gospels, the titles ‘scribes’ and ‘lawyers’ are often interchangeable (see Matthew 22: 35; Mark 12: 28; Luke 20: 39). They are the public teachers of the people, and frequently come into collision with Christ. Later, many scribes are hostile to the apostles (see Acts 4: 5; Acts 6: 12).

As the teachers of the people (Mark 1: 22) and interpreters of the Law, they are widely respected by the community because of their knowledge, dedication, and law-keeping. The scribes act responsibly and seriously in their task of preserving Scripture, and are faithful in the study of Scripture, particularly the Law and how it should be followed. They copy and recopy the Bible meticulously, even counting letters and spaces to ensure each copy is correct.

They are professional at spelling out the letter of the Law, but in the Gospels are often charged with ignoring the spirit behind the law, so that the regulations and traditions added to the Law become more important than the Law itself. They know the Law and they teach it to others, but do not always honour the spirit of the Law.

There is a contrast in the passages immediately before this reading: while Jesus teaches with personal authority (see Mark 11: 27-33), no Scribe ever gave an independent judgment or a decision on his own, but would begin, ‘There is a teaching that …’

The scribe in this reading asks Jesus in the Temple, ‘Which commandment is the first of all?’ (Mark 12: 28).

Later in this chapter, in the reading provided for the following Sunday (Mark 12: 38-44), Christ refers to the fashion of the Scribes walking around in long robes (Mark 12: 38), perhaps a reference to an ostentatious display of prayer shawls that indicate a claim to observing each and every one of the 613 commandments.

In some Jewish communities, a tallit is given as a gift by a father to a son, a father-in-law to a son-in-law, or a teacher to a student. It might be a present to mark a special occasion, such as a wedding or a bar mitzvah. Many parents buy a tallit for their sons when they reach the age of 13.

In the Reform and Conservative movements, some women also wear a tallit.

While many people bring their own tallit to a synagogue, there is usually a rack of them for visitors and guests to use.

At Jewish wedding ceremonies, a tallit is often used as a chuppah or wedding canopy. Similarly, a tallit is traditionally spread out as a canopy over the children during the Torah-reading ceremony during the holiday of Simchat Torah, or in any procession with Torah scrolls, such as when parading a newly completed scroll through the streets.

The tallit is traditionally draped over the shoulders, but during prayer, some cover their head with it, notably during specific parts of the service such as the Amidah, the central prayer or the Jewish liturgy, and when called to the Torah for an aliyah or reading in the synagogue.

The tallit is typically either all white, white with black stripes, or white with blue stripes. The all-white and black-and-white varieties have traditionally been the most common, with the blue-and-white variety, in the past said to be in remembrance of the blue thread or tekhelet, becoming increasingly prevalent in recent years among non-Orthodox Jews because the colours blue and white are associated with the State of Israel.

The all-white variety is customary among Sephardic communities, but in Ashkenazic communities white tallitot with black stripes are more traditional. One tradition says the black stripes symbolise the destruction of the Temple in Jerusalem and the exile of the Jews from the land of Israel.

In the Gospel passage I have been working on, the Scribe in the Temple is probably wearing a full-length tallit, and now he wants to know which of one of the 613 commandments symbolised in his tallit is the most important.

The first command Christ quotes is the shema, ‘Hear, O Israel, …’ (verse 29), recited twice daily by pious Jews. The shema became a prayer composed from Deuteronomy 6: 4-9 and 11: 13-21, and to this day it is recited twice a day in Jewish practice.

Christ links this first commandment to a second, ‘You shall love your neighbour as yourself’ (verse 31). Once again, he is not quoting from the Ten Commandments; instead, here he is quoting Leviticus 19: 18.

Christ combines these two precepts into a moral principle, linked by love. But he is not the first, nor is he the last, to do this, and the combination is not unique for the scribes or the Pharisees.

Hillel the Elder (ca 110 BC to 10 AD), who was asked a similar question, cited this verse as a most important message of the Torah for his teachings. Once, Hillel was challenged by a gentile who asked to be converted on condition that the Torah was explained to him while he stood on one foot. Hillel accepted him as a candidate for conversion to Judaism but, drawing on Leviticus 19:18, told the man: ‘Do not do to anyone else what is hateful to you: this is the whole Torah; the rest is the explanation; go and learn’ (Babylonian Talmud, Shabbath 31a).

The scribe agrees with Jesus and elaborates. Both precepts are much more important than all the burnt-offerings and sacrifices in the Temple (verses 32-33).

For responding in this way, Christ tells this scribe that he has answered wisely and is near the kingdom of God (verse). 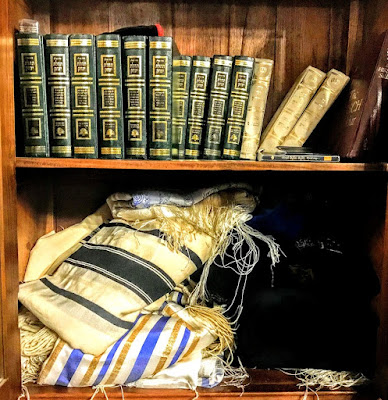 A choice of tallitot or prayer shawls in the synagogue in Chania in Crete … the number of knots and fringes represent the 613 commandments in Jewish law; but which is the most important? (Photograph: Patrick Comerford)