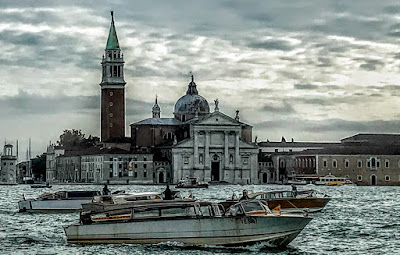 When I was writing this morning about Salute, the landmark church at the southern end of the Grand Canal, I had referred to EM Forster’s remark in A Passage to India (1924) that but for ‘the Salute holding the entrance’ … the canal ‘would not be the Grand Canal Salute.’

In the same passage, Forster also refers to the Church of San Giorgio Maggiore in as another example of the perfection of Italian architecture, and he describes ‘San Giorgio standing on the island which could scarcely have risen from the waves without it.’

San Giorgio Maggiore can be seen clearly from Saint Mark’s Square. It is a landmark building just beyond the entrance to the Grand Canal, yet it is visited by few tourists during their brief stay in Venice. But this 16th-century Benedictine church on an island that shares the same name is of architectural importance for it was designed by the great architect of Venice, Andrea Palladio.

The church and monastery on the island were rebuilt after the earthquake. The church, which had a nave with side chapels, was not in the same position as the present church, but stood farther back at the side of a small campo or square. The cloisters in front of were demolished in 1516, and from 1521 the monks began planning to rebuild the church.

Palladio arrived in Venice in 1560, when the refectory of the monastery was being rebuilt. He made great improvements to this, and in 1565 he was asked to prepare a model for a new church.

The model was completed and approved in 1566 and the foundation stone was laid in the presence of the Pope that year. The work was not finished before Palladio died in 1580, but the body of the church was complete by 1575 apart from the choir behind the altar and the façade. The decoration of the interior was completed later.

The choir appears to have been designed in essentials by Palladio before his death and was built between 1580 and 1589.

Work on the façade, initially built with Simone Sorella superintending the project, did not begin until 1599. The stonemason’s contract insisted on following Palladio’s model and only minor changes were made before it was completed in 1610.

It is a curious fact that although the campanile or bell tower is a landmark on the skyline of Venice, not designed by Palladio. It was first built in 1467, fell in 1774, and rebuilt in neo-classic style by 1791. From the top of the campanile there are fine views across Venice and the Lagoon.

The façade of the church is a brilliant white and represents Palladio’s solution to the difficulty of adapting a classical façade to the form of this church, with its high nave and low side aisles. Palladio’s solution was to superimpose two façades, one with a wide pediment and architrave, extending over the nave and both aisles, apparently supported by a single order of pilasters, and the second with a narrower pediment that is the width of the nave and that is superimposed on it with a giant order of engaged columns on high pedestals.

This solution is similar to Palladio’s slightly earlier façade for San Francesco della Vigna, where the other parts of the church had been designed by Sansovino.

On either side of the central portal are statues of Saint George and of Saint Stephen, the patrons of the church.

Inside, the church is bright, with massive engaged columns and pilasters on undecorated, white-surfaced walls. The interior combines the long nave of a basilica with a cruciform plan with transepts.

Two very large paintings by Jacopo Tintoretto, ‘The Last Supper’ and ‘The Fall of Manna,’ depict to the institution of the Eucharist. In the Cappella dei Morti or mortuary, a second painting by Tintoretto depicts ‘The Entombment of Christ.’

The chapel to the right of the high altar once belonged to the Bollani family, whose members included Domenico Bollani, once ambassador to King Edward VI of England and later a bishop.