Who is the Child of Prague?
And how did he get to Prague? 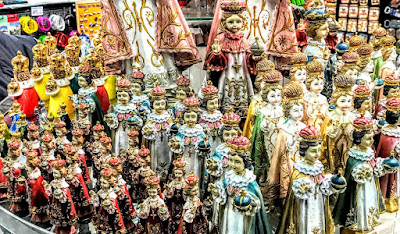 Statues of the Child of Prague on sale in a souvenir shop in Prague (Photograph; Patrick Comerford, 2019)

The ‘Infant of Prague’ was a popular devotional statue in Ireland from the late 19th to the mid-20th century. During those decades, the statue was linked to folk customs about weddings, prayers for fine weather, and superstitions about warding away poverty from a household and a family.

One custom involved placing a statue of the ‘Infant of Prague’ outside a bride’s house under a hedge or bush in the front garden to guarantee fine weather. Some people believed the statue needed to be outside the church where the wedding was taking place, while others buried the statue in the garden. A gift of a statue of the Child of Prague was also seen as an appropriate wedding present.

Other traditions involved placing a silver coin, usually a ‘half-crown’ (2/6), under the statue inside the house as a talisman against poverty and hunger.

There is also a tradition that the power of the statue is strongest after its head has been knocked off – but this has to happen ‘accidentally.’

Throughout Prague this week, a variety of statues of the ‘Infant of Prague,’ from tiny to miniature, robed in copes of all liturgical colours, could be seen in the windows and on the shelves of souvenir and tourist shops.

But who is this Infant?

And how did he ever get to Prague?

The Infant of Prague or Child of Prague is a 16th century wax-coated wooden statue of the Child Jesus holding a golden orb surmounted by a cross. The statue is displayed in the Church of Our Lady Victorious, a Carmelite church in Malá Strana, below the slopes leading up to Prague Castle.

Pious legends say the statue once belonged to the Spanish Carmelite mystic, Saint Teresa of Ávila, and that it was donated to the Carmelite friars in 1628 by Princess Polyxena of Lobkowicz (1566-1642).

The exact origin of the statue is not known, but historical sources point to a 48 cm sculpture of the Christ Child with a bird in his right hand, now in the Spanish Cistercian monastery of Santa María de la Valbonna in Asturias, that was carved around 1340. Similar sculptures were carved throughout Europe in the Middle Ages. The bird in these statues symbolises either a soul or the Holy Spirit. The statues were often dressed in imperial regalia, reflecting the aristocratic fashion of the time.

One legend says a monk in an abandoned monastery between Cordoba and Seville had a vision of a small boy telling him to pray. The monk had spent several hours praying and then made a figure of the child.

When the House of Habsburg began to rule the Kingdom of Bohemia in 1526, Bohemia developed close ties with Spain. The statue first appeared in 1556, when María Maximiliana Manriquez de Lara y Mendoza brought the image to Bohemia when she married a Czech nobleman, Vratislav of Pernstyn.

A legend in the Lobkowicz family says María’s mother, Doña Isabella, was given the statue by Saint Teresa of Ávila. María received the family heirloom as a wedding present. It later passed to her daughter, Princess Polyxena, who donated the statue to the Discalced Carmelites or White Friars in 1628.

The statue was placed in the oratory of the monastery of Our Lady of Victory in Prague. There, special prayers were said before it twice a day, and Carmelite novices professed their vow of poverty in the presence of the statue. When he heard about the Carmelites’ devotions and needs, the Emperor Ferdinand II donated 2,000 florins and a monthly stipend for their support.

The Carmelite novitiate was transferred to Munich in 1630. The Thirty Years’ War brought an end to the special devotions in Prague, and in 1631 the Swedish army of King Gustavus Adolphus captured Prague. The Carmelite friary was plundered and the statue of the Infant of Prague was thrown into a pile of rubbish behind the altar. There it lay forgotten for seven years, its hands broken off, until it was found again in 1637 by Father Cyrillus and placed in the church’s oratory.

One day, while praying before the statue, Father Cyrillus is said to have heard a voice say, ‘Have pity on me, and I will have pity on you. Give me my hands, and I will give you peace. The more you honour me, the more I will bless you.’

Since then, the statue has remained in Prague and has drawn many devotees from across the world.

The statue is routinely clothed by the Carmelite nuns in luxurious fabrics with imperial regalia and a golden crown, while his left hand holds a golden orb and his right hand is raised in blessing.

In 1739, the Carmelites of the Austrian Province formed a special devotion apart from their regular apostolate. In 1741, the statue was moved to the epistle side of the Church of Our Lady of Victory in Prague.

The statue is a 48 cm, wooden and coated wax image of the Infant Jesus. The surface of the wax is quite fragile. In order to protect the fragile wax surface, the bottom half below the waist is enclosed in a silver case.

Since 1788, the statue’s two raised fingers have worn two rings, as a thanksgiving gift by a noble Czech family for healing their daughter, along with its golden blond hair. Some earlier records indicate that the original wig was possibly white.

Several costly embroidered vestments have been donated by benefactors, including Empress Maria Theresa and Emperor Ferdinand I of Austria. A notable garment in the collection is an ermine cloak placed on the statue the first Sunday after Easter, the anniversary of the coronation of the statue by the Archbishop of Prague, Ernst Adalbert von Harrach, in 1655.

Pope Leo XIII approved devotion to the statue in 1896 and instituted a sodality in its favour. Pope Pius X further organised the Confraternity of the Infant Jesus of Prague in 1913, while Pope Pius XI granted the statue its first canonical coronation in 1924. Pope Benedict XVI crowned the statue for a second time during his visit to Prague ten years ago, in 2009.

The statue has a wardrobe of around 100 vestments. The clothes follow the customary colours for the liturgical seasons: Green, Ordinary Time; Purple, Lent, Candlemas and Advent; Red or Gold, Christmas and Easter; Royal Blue, the Immaculate Conception (8 December) and the Assumption (15 August). 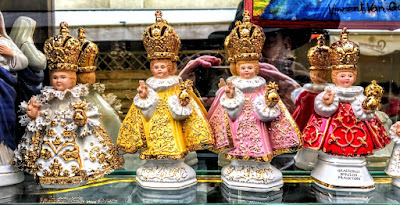 Statues of the Child of Prague on a shopfront shelf in Prague (Photograph; Patrick Comerford, 2019)