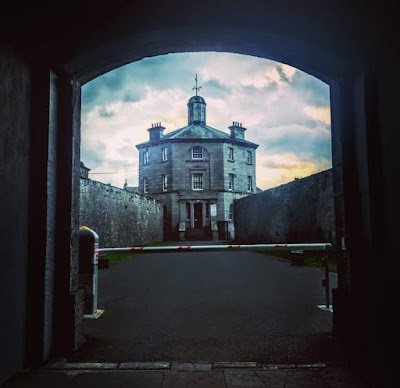 The Governor’s House on O’Rahilly Street must be the most unusual building in Nenagh, Co Tipperary. This significant part of the Nenagh’s prison complex was designed by the Dublin architect John Benjamin Keane, who also designed the town’s courthouse.

With sad irony, the latter years of Keane’s career appear to have been blighted by alcoholism. The man who designed the Governor’s House, prison and courthouse in Nenagh, fell into debt and was imprisoned in the Marshalsea gaol. He died on 7 October 1859.

This is detached, octagonal-plan three-storey house, built for the prison governor in 1840-1842, with a raised basement a single-bay entrance elevation. The other seven sides have two-bay elevations. The Governor’s House stood in the centre of a prison complex, with buildings radiating out from it in a pattern that reflected the octagonal shape of the house.

The windows on the ground floor are barred and round-headed, and the rest of the windows are square-headed. There is a timber panelled double-leaf door with fixed sidelights, flanked by cut limestone pilasters, fascia and cornice, and approached by a flight of steps. The timber battened door at the east face has a fanlight and a flight of steps. The building retains many other original features, including timber sash windows and a cast-iron weather vane.

Today, the North Tipperary Genealogy Centre is located in the Governor’s House, and provides a family history research service for people tracing Irish ancestors who originated in North Tipperary. 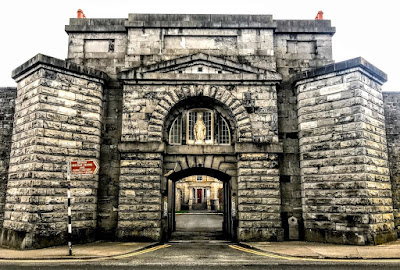 The Gatehouse was built in the style of a classical triumphal arch (Photograph: Patrick Comerford, 2019)

The Governor’s House is approached through the Gatehouse, built around 1840, almost in the style of a classical triumphal arch as part of the prison complex. It has triangular bastions instead of flanking arches and it is only when you look closely that you see it was also used as a dwelling. Local tradition says prisoners were once hanged from this arch.

Condemned cells in the Gatehouse held prisoners who were sentenced to death by hanging. Between 1842 and 1858, 17 Tipperary men were executed here.

Shortly after the prison closed in 1887, it was taken over by the local Tipperary branch of the Sisters of Mercy for educational purposes. Earlier, behind the Gatehouse and the Governor’s House, the Sisters of Mercy Convent was built in 1859-1861. It was first designed by AWN Pugin’s son, Edward Welby Pugin (1834-1875), who designed a three-storey addition containing a chapel, community room and dining room.

Joseph O’Malley was the youngest of the 12 children of Michael O’Malley, a farmer, and his wife, Kate Fleming O’Malley (1820-1901), into a family associated with the Round House in the centre of Limerick for generations.

Kate Fleming O’Malley was the matriarch of the family. Her four daughters became nuns, while the rest of her family and her descendants included three Irish government ministers, Donough O’Malley, the legendary Minister for Education, Des O’Malley, founded of the Progressive Democrats, and Tim O’Malley; two Mayors of Limerick, Dessie and Michael B O’Malley; and two other Limerick Corporation members, Patrick O’Malley and his son Charlie. Kate’s granddaughter, the writer and educator Dr Pamela O’Malley (1929-2006), moved to Barcelona in 1952, was imprisoned twice in Spain by Franco’s regime.

O’Malley also had a busy private practice in Limerick, working mainly with Catholic churches and convents, as well as domestic work in Limerick, Clare, Cork, Kerry and Tipperary. He was in partnership with Horace Tennyson O’Rourke in 1908-1910. He died in Corbally, Co Limerick, in 1933.

O’Malley’s U-plan, two-storey convent in Nenagh has an 11-bay front elevation with an entrance breakfront and advanced terminating bays with two-storey returns to the rear. There is a cruciform-plan chapel at the north end and a recent single-bay extension at the south.

The convent is built on the site of the former women’s prison and stands among the remaining prison buildings. 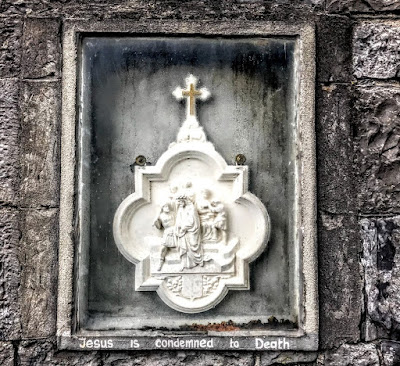 Stations of the Cross in the grounds of the Sisters of Mercy Convent in Nenagh (Photograph: Patrick Comerford, 2019)