How Shop Street Bridge
in Tuam acquired
an unusual balustrade 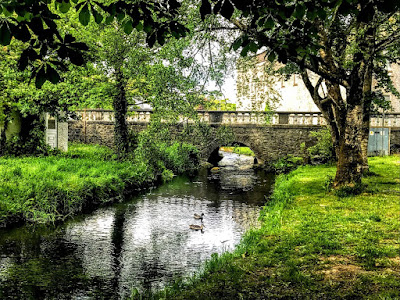 Shop Street Bridge in Tuam, Co Galway, is said to have been first built in the early 17th century by Archbishop William Daniel (Photograph: Patrick Comerford, 2019)

Shop Street Bridge in Tuam connects Shop Street with the north part of the town and has been an important commercial route in the Co Galway town for more than four centuries.

An earlier bridge in Tuam, Bishop Street Bridge, was built between 1609 and 1629 by William Daniel, Archbishop of Tuam. Archbishop Daniel, who was born in Kilkenny, was one of the first scholars of Trinity College Dublin, and later one of the first elected fellows.

At TCD, he became involved in translating the New Testament into Irish. The project was commenced by Nicholas Walsh, Bishop of Ossory, John Kearney, Treasurer of Saint Patrick’s Cathedral, Dublin, and Nehemiah Donnellan, Archbishop of Tuam, and their translation was printed in 1602.

William Daniel also translated an Irish version of the Book of Common Prayer, published in 1608. He was appointed Prebendary of Stagonil in Saint Patrick’s Cathedral, Dublin, in 1591, and Treasurer of the cathedral in 1609. He became Archbishop of Tuam in 1609.

Archbishop Daniel died in Tuam on 11 July 1628, and was buried in in Saint Mary’s Cathedral, Tuam, in the same tomb as his predecessor and brother-in-law, Nehemiah Donnellan.

The balustrade on Shop Street Bridge is said to have been first commissioned by the Blake family for Menlo Castle (Photograph: Patrick Comerford, 2019)

Shop Street Bridge was built in Tuam in 1735 by Timothy Dunne, Sovereign (Mayor) of Tuam. This is a low, three-arch limestone bridge, built with coursed rubble limestone walls and with round arches flanking the wider and taller round middle arch.

However, the glory of the bridge is its balustrade, which was added in the 1820s. It is said this balustrade was commissioned for Menlo Castle by Charles Blake who owned the brewery in Tuam. His wife was one the Blakes of Menlo, who are one of the 14 ‘Tribes of Galway.’ However, when the balustrade was installed, she did not like it and it was moved to the bridge in Tuam.

This balustraded parapet has intermediate cut-stone plinths and piers with square recessed panels decorated with fans in each corner and plain piers at the ends. The balustrade supports limestone copings.

The park area below the bridge been the mill pool until 1961, and the mill with its millwheel operated as a corn mill from 1720 until 1964. The watermill is unusual in being built over a river and supported by arches that could have served also as mill races. 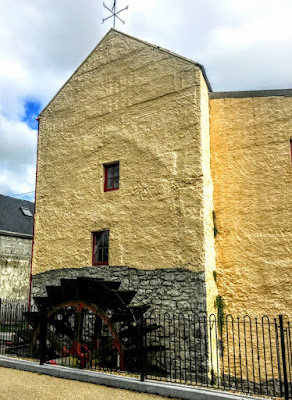 The mill with its millwheel operated as a corn mill from 1720 until 1964 (Photograph: Patrick Comerford, 2019)

The Corrib Drainage Scheme lowered the riverbed of the River Nanny by 1.78 metres at Bishop Street Bridge and upstream. This dramatically cut power to the existing mills along the river, and as a result an electric engine was installed to power the ‘Little Mill.’

The mill closed in 1964. The ‘Little Mill’ was turned into a museum in 1978 on foot of a heritage project by Saint Patrick’s Secondary School and the teacher Tony Claffey. The project later received the ‘Best European Project’ award in Brussels. Today, it is the only fully preserved corn mill in the west of Ireland.

The Mill Pool was redesigned as a two-stage channel in 2007, the park was laid out as King Ruairdrí O’Connor Park, named in honour of the Last High King of Ireland, and the Miller’s Cottage with its Victorian facade was rebuilt in 2016.

The park is now a peaceful area by the River Nanny. 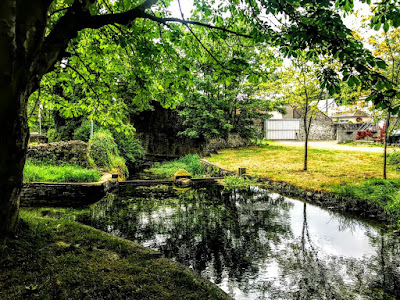