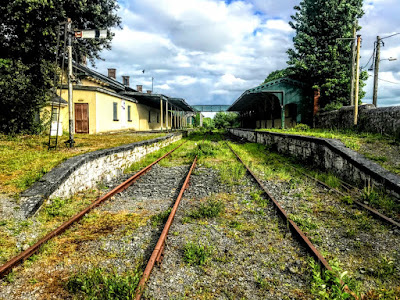 The abandoned railway station in Tuam, Co Galway … the arrival of the railway in Tuam inspired the building of third version of Saint Mary’s Cathedral (Photograph: Patrick Comerford, 2019)

With the arrival of the railway in Tuam in 1860-1861, the Anglican population of Tuam more than doubled from 310 to 640. The 14th century cathedral was no longer large enough to accommodate the growing congregation, and Charles James Seymour, the Dean of Tuam, was inspired to commission a third cathedral on this site, the present Saint Mary’s Cathedral, in 1861-1878.

The former railway station in Tuam, despite its present sad state, is a handsome villa-style building. It is a fine building in the tradition of railway architecture and is enhanced by the retention of most of its original fabric and details. The water tank is also a good structure in the engineering tradition.

This is a detached nine-bay single-storey building. It has a five-bay central section with a projecting gable-fronted porch, and this is flanked by slightly recessed two-bay sections.

The station has a pitched slate roof with six ashlar limestone chimneystacks, and wide eaves with carved timber brackets. There are painted rendered walls, and the front elevation has rusticated limestone raised quoins at all its corners and cut limestone skirting.

The doorway had a moulded limestone surround. The square-headed doorway had a cut limestone doorcase with imposts, plinths and brackets supporting a heavy cornice, with glazed timber panelled double-leaf doors and a plain overlight, and it was approached by limestone steps with metal rails.

The platform façade of the building was obscured by modern additions. To the east, a cast-iron water tank was signed ‘B Graham Waterford.’ It stood on a limestone base built of large blocks of roughly finished limestone, some with natural vermiculation, and rusticated raised quoins on the corners and on the central round-headed arch.

The platform shelter, which is now disused, is a fine example of cast-iron work and railway engineering.

It has a pitched corrugated-iron roof on light steel trusses with braces, supported at the rear by a brick wall that has a rendered base and rectangular panels with moulded brick surrounds, and at the centre of the plan by cast-iron brackets supported on round cast-iron columns with Corinthian capitals. The spandrels to the brackets have ornate vegetal decoration.

The station also has a three-bay double-height goods shed that is a very good example of railway goods shed.

The railway footbridge, built ca 1870, is highly decorative and a good example of the quality of iron casting in the 19th century.

The station opened on 27 September 1860, serving the line from Tuam to Athenry. The Tuam to Claremorris extension opened in 1872.

Some sources say the station may have been designed by John Skipton Mulvany (1813-1870) who designed an extension to the hotel at Salthill, Monkstown, for the Dublin and Kingstown Railway Company. Between 1837 and 1841, he designed stations at Salthill, Blackrock and Kingstown for the same company, and he later became architect to the Midland Great Western Railway Company and to the Dublin Trunk Connecting Line, designing the station at Broadstone in Dublin (1841-1851) and stations in Mullingar, Dalkey, Galway, Ballinasloe, Moate and Athlone.

However, it is more probable that Tuam station was designed by George Willoughby Hemans (1814-1885). He was born in St Asaph, North Wales, the son of Captain Alfred Hemans and his wife, the poet Felicia Hemans, whose grandfather, George Browne, was from Passage, Co Cork.

After three years at a military college in France, Hemans moved to Dublin to live with his uncle, Colonel George Baxter Browne, a magistrate and police commissioner. After working on the Ordnance Survey, Hemans became a pupil of Sir John MacNeill in London.

As MacNeill’s pupil, he worked on several Irish and Scottish railway lines. He then became Resident Engineer in charge of the Dublin end of the Dublin and Drogheda Railway. In this role, Hemans built the first two iron lattice bridges in Ireland on this line. Hemans then took charge of a division of the new Great Southern and Western Railway between Dublin and Cork.

In 1845, the directors of the Midland Great Western Railway invited Hemans to take charge of their proposed new line to Mullingar and Longford. The line to Mullingar opened in 1848 but stopped because of a lack of funds.

As a famine relief measure, the Government loaned the company £500,000 in 1849 to build a railway line between Athlone and Galway, and the company undertook to finance the line between Mullingar and Athlone. The railway pioneer William Dargan was contracted for the project, and the line from Mullingar to Galway was completed in August 1851, five months ahead of schedule and well below the estimated cost.

Hemans continued as engineer to the Midland Great Western railway until 1865. He also became chief engineer of the Waterford and Limerick railway, and during the 1860s he was also engineer to many other lines: Athenry and Ennis Junction; Athenry and Tuam; Dublin and Baltinglass; Enniskillen, Bundoran and Sligo; Inniskeen to Carrickmacross; Kilkenny Junction; Kilrush and Kilkee; Limerick and Kilkenny; from Newry to Armagh, Greenore and Warrenpoint; and the Portadown, Dungannon and Omagh Junction.

Hemans built more railways in Ireland than any other engineer of his time, employing Richard Hassard as his chief assistant for several years.

At its height in the 1930s, when Tuam was a centre of industry, a total of 102 workers were employed at Tuam railway station. The railway line was used during the filming of The Quiet Man, and can be seen when John Wayne disembarks at Ballyglunin, about 6 km from Tuam.

By 1976, the number of workers had fallen to two – the station master and a porter. Tuam railway station closed to passenger traffic on 5 April 1976 and finally closed altogether on 18 December 1978.

At times, there have plans to reopen the Athenry to Tuam railway line, but they have been put on hold constantly. This would provide intercity services between Tuam and Galway and Dublin, and hopefully it comes in time to save Tuam’s railway station too.