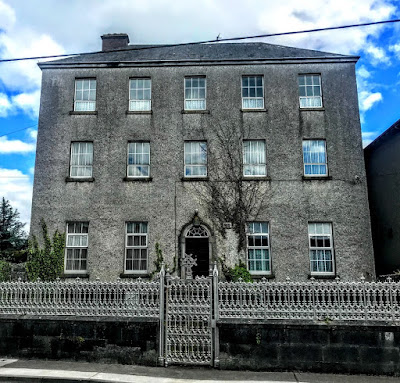 I was in Tuam last Sunday for a funeral in the Cathedral of the Assumption, and spent some time there as well as visiting Saint Mary’s Cathedral, Temple Jarlath and the former episcopal palace.

The Cathedral of the Assumption faces the former Church of Ireland episcopal palace, but it is also surrounded by a number of ecclesiastical and educational establishments that embellish its location, creating a church campus of sorts in this Co Galway town.

Saint Jarlath’s College was first established in a house on Bishop Street that was first built ca 1800 for John Birmingham of Dalgin.

This house became the headquarters of Tuam Bank, or ffrench’s Bank in 1803. But when the bank collapsed in 1813, the house and the 17 acres of land attached to it were acquired for Saint Jarlath’s College, the new diocesan seminary. Three years later, Archbishop Kelly bought the house next door as his residence.

The former ffrench’s Bank is set back off Bishop Street, has five bays, three storeys, a basement and a flight of limestone steps with curving balustrades leading up to the front door.

There is a round-headed carved limestone doorcase with a block-and-start surround with a moulded surround and archivolt, plinths, a triple keystone and a cobweb fanlight. It is considerably enhanced by the ornate railings and gates to the front.

This is one of the largest houses in Tuam and remains part of the Roman Catholic cathedral precinct. 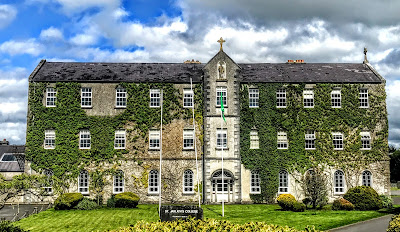 Saint Jarlath’s College moved to a purpose-built college building beside the cathedral in 1858. It was designed in a classical style to emphasise the traditional values of classical education and the authority of the Roman Catholic Church.

This H-plan college, built in 1858, has been added to substantially since then. The main façade has nine bays and three storeys with advanced gabled wings of two bays that are the ends of flanking ranges and have oriel windows.

The latter ranges are 11 bays long with a gabled single-bay breakfront on the south-west range. The architectural features include square-headed windows on the main façade and on the upper floors of the west range, oriel windows that are canted and supported on corbels, and a round-headed doorcase with a surround of dressed parallel blocks and a replacement timber door.

An inscribed plaque over the door commemorates the foundation of the college by Archbishop John MacHale in 1858. When this seminary was built, Saint Jarlath's College was an important statement of the confidence and the independence of the Roman Catholic Church in Ireland. The college remains an important architectural and historical building in Tuam.

Facing Saint Jarlath’s College on the opposite, south-west side of the cathedral grounds, the Presentation Convent is dated 1848.

Bequests from William Burke, who is commemorated in a statue beside the cathedral, allowed the Presentation Sisters to establish their convent here in 1835, and the Sisters of Mercy acquired an adjoining property in 1846.

The Presentation Covent is a very fine composition with good late classical detailing. The architect was Henry Hart of Dublin who was also involved in drawing up plans to improve Saint Patrick’s Hospital, Dublin, including a new design for the windows.

The decorative focus of the Presentation Convent, the entrance breakfront, features a fine limestone doorcase, a simple limestone cornice, a blocking course and a carved limestone cross. This is a detached, two-storey building with a basement, built on an H-plan. It has an eight-bay centre with a two-bay entrance breakfront, and single-bay wings, four-bay side elevations, and various later blocks added at the rear.

A limestone plaque on the first floor of the breakfront records the foundation of the convent by Archbishop MacHale in 1848. The building faces onto lawns and mature trees. The retention of many original features, such as the rear doorway and front railings, enhances the building. 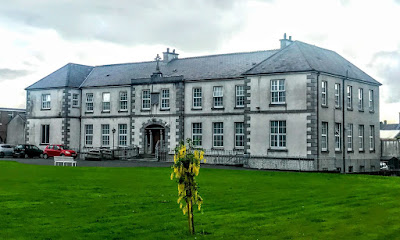 The Presentation Convent, dating from 1848, was designed by Henry Hart (Photograph: Patrick Comerford, 2019)