A plaque at Boots in Cambridge recalls Charles Darwin lived in rooms on Sidney Street in 1828 (Photograph: Patrick Comerford, 2019)

During my visits to Cambridge this week, I noticed for the first time two plaques – one a blue plaque – at Boots in Sidney Street announcing that Charles Darwin (1809-1882) ‘lived in a house on this site’ in 1828.

Darwin once said, ‘Upon the whole, the three years which I spent at Cambridge were the most joyful in my life.’ I had always thought he spent those three years in rooms in Christ’s College, and knew he had later rented rooms on Fitzwilliam Street after returning to Cambridge from the Beagle. But I had never realised that he once stayed in rooms above a tobacconist’s shop on Sidney Street.

Darwin’s cousin, Hensleigh Wedgwood (1803-1891), later a philologist and barrister, also went to Saint John’s College in 1821. However, at the time it had a reputation for strict discipline. Wedgwood moved to Christ’s after only one term. He took his BA in 1824 and was elected a Finch and Baines Fellow of Christ’s in February 1829, a position he held until October 1830.

I suppose it is not surprising then that his cousin, Charles Darwin’s brother, Erasmus Darwin, joined Christ’s College on 9 February 1822. He received his MB in 1828. Darwin’s second cousin, William Darwin Fox (1813-1881), later a clergyman and naturalist, came up in 1824.

So, Charles Darwin was following his cousins and brother to Christ’s. In those days, it was known as a quiet and relaxed college, neither academically rigorous nor religiously strict.

Charles Darwin’s name was entered in the admissions books at Christ’s College on 15 October 1827 as a candidate for an ordinary BA degree. As Darwin had forgotten much of his school Greek, he was tutored before coming up to Cambridge in the Lent Term of 1828. 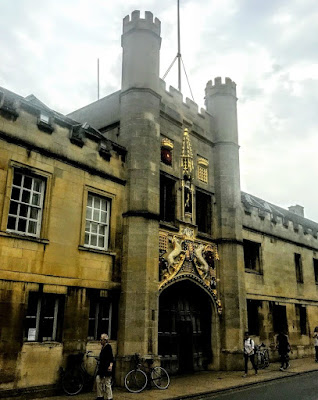 Darwin arrived in Cambridge on Saturday 26 January 1828, at the age of 18. His brother Erasmus returned two weeks later on 8 February. As the academic year began the previous October, all the college rooms were already full, and so Charles found lodgings in rooms above the shop of William Bacon, a tobacconist, in Sidney Street.

Sidney Street was then a narrow street, and he was just a minute or two in walking distance from Christ’s College. The view from his window probably gave him a glimpse of Lady Margaret Beaufort’s great gatehouse, which I was writing about yesterday.

His lodgings above a tobacconist’s shop led to some teasing. One friend, Albert Way (1805-1874) of Trinity College, drew a mock coat of arms for Darwin in April that included crossed tobacco pipes, meerschaum pipes, cigars, a wine barrel and beer tankards.

That summer, Darwin went home to Shrewsbury. When he returned to Cambridge for the Michaelmas Term on 31 October 1828, he found a room was now available in Christ’s College and the Tutor assigned him to a comfortable set on the south side of First Court.

On All Saints’ Day, 1 November 1828, he moved into a set of rooms, as he later recalled, ‘in old court, middle stair-case, on right-hand on going into court, up one flight, right-hand door & capital rooms they were.’

There is a tradition that these were once the rooms of the natural theologian William Paley (1743-1805), although there is no evidence to substantiate this story. At the time, college staircases were not named with letters as they are today, but Darwin’s rooms are now known as G4.

Darwin had a panelled main sitting room with an adjoining dressing room and bedroom. His three windows on the north side overlooked First Court, with the Chapel directly across from him, the Master’s Lodge to its right and closer still the Hall. Darwin’s south facing windows overlooked what was formerly called Bath Court and is today the site of the new undergraduate library.

He decorated his room with 18th century engravings of master paintings, and loved spending time listening to the choir in the Chapel at nearby King’s College. 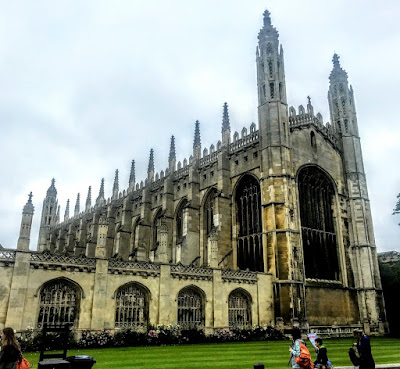 Darwin spent time listening to the choir in the Chapel at King’s College (Photograph: Patrick Comerford, 2019)

Darwin later recalled: ‘During the three years which I spent at Cambridge my time was wasted, as far as the academical studies were concerned.’ But he graduated in the Easter Term of 1831.

When he returned from the five-year voyage in October 1836, Darwin visited his family home in Shrewsbury and then returned to Cambridge and took lodgings at 22 Fitzwilliam Street, near the site where the Fitzwilliam Museum would open in 1848, and where he organised his specimen collection from the voyage. He dined often in Christ’s College, and I was once shown where his name occurs frequently in the Combination Room wine book.

For the rest of his life, he had a strong affection for Christ’s College, and he sent his eldest son, William, there in the 1860s. In his Autobiography in 1876 he recalled, ‘Upon the whole, the three years I spent at Cambridge as the most joyful of my happy life; for I was then in excellent health, and almost always in high spirits.’

Darwin was awarded an honorary degree of Doctor of Laws (LL.D) from the University of Cambridge on 17 November 1877. It was a somewhat raucous event in the Senate House, at which a stuffed monkey was dangled above Darwin’s head by undergraduate pranksters.

Christ’s College regretted that new statutes were not approved in Parliament in time to confer on him the only honour it could, that of an honorary Fellowship. He died in London on 19 April 1882 and is buried in Westminster Abbey.

The site of Bacon’s tobacconist shop in Sidney Street is now occupied by Boots the chemist. A blue plaque under the first floor windows commemorates Darwin’s stay there: ‘Charles Darwin lived in a house on this site 1828.’

Lower down, at ground floor level, a slate plaque on a pillar facing the street reads, ‘Charles Darwin 1808-1882 kept in lodgings on this site in 1828 while an undergraduate of Christs [sic] College.’ 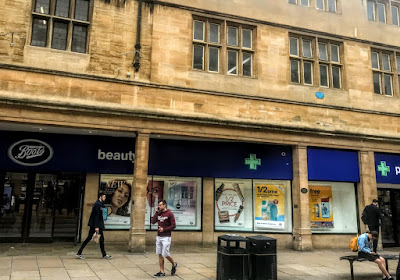