Requiem for Freddie:
another chapter closes
at Christ Church Cathedral 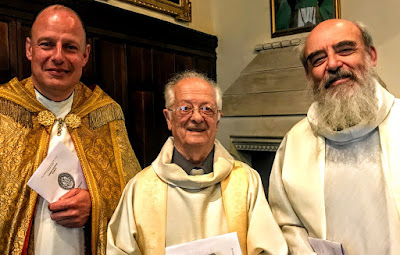 Three Precentors at a funeral … with Canon Roy Byrne (left), Precentor of Christ Church Cathedral, Dublin, and Canon John Bartlett (right), former Precentor and former Principal of the Church of Ireland Theological College, at the funeral of Freddie McKeown this morning

Freddie McKeown was the Dean’s Verger in Christ Church Cathedral, Dublin, for all the time I was associated with it over half a century: he was there when I was commissioned a reader by Archbishop Donald Caird 25 years ago in 1994, when I was ordained deacon and priest by Archbishop Walton Empey in 2000 and 2001, and when I was installed as a canon on the nomination of Archbishop John Neill in 2007.

Freddie was, in so many ways, the life of the cathedral, day in, day out.

Whether I was the canon-in-residence or the priest on duty, it was Freddie who would verge me into my stall or into the pulpit with his verger’s wand.

This morning, that verger’s wand was laid on Freddie’s coffin at his Requiem Mass in Christ Church Cathedral. The celebrant was Dean Dermot Dunne and the preacher was Archdeacon David Pierpoint. With Canon Sonia Gyles of Sandford and Milltown and Canon Roy Byrne of Monkstown at Freddie McKeown’s funeral in Christ Church Cathedral, Dublin, this morning

I felt particularly honoured and moved to be invited to process with the Chapter, of which I had been a member for ten years, and to assist with the administration of Holy Communion at the High Altar.

It was a funeral I would be pleased with for myself, in the full Anglo-Catholic tradition that Freddie was so comfortable with.

Among the clergy present were many present and past members of the cathedral chapter and Archbishop Walton Empey.

In so far as funerals can also be moments of pleasure, it was a delight to be seated in the sanctuary and so close, once again, to the Cathedral Choir.

As Freddie’s coffin was welcomed at the door of the south porch and we processed into the cathedral, the choir sang the Burial Sentences to a setting by William Croft (1678-1727).

Freddie had chosen the two readings (Revelation 7 and John 14: 1-6, 27) and all the hymns: Angel voices ever singing, Sing we of the blessed Mother, In our day of thanksgiving, Blest are the pure in heart, and Sweet Sacrament divine.

The music also included Requiem aeternam, sung as the Introit, Lux aeterna, sung after Agnus Dei at the invitation to Communion, and In paradisum deducant, sung as the Post-Communion Motel, all three from Gabriel Fauré’s Requiem.

As Freddie’s coffin was sprinkled with holy water and censed with incense, the choir sang Asperges me, a setting of Psalm 51 by Tomás Luis de Victoria, and then sang Nunc Dimittis to a setting by Charles Stanford.

The Communion Motet was words from a sermon preached in 1627/1628 by John Donne, to a setting by William Harris:

‘Bring us, O Lord God, at our last awakening, into the house and gate of heaven, to enter into that gate and dwell in that house, where there shall be no darkness, nor dazzling, but one equal light; no noise nor silence, but one equal music; no fears nor hopes, but one equal possession; no ends nor beginnings, but one equal eternity; in the habitation of thy glory and dominion, world without end. Amen.’ 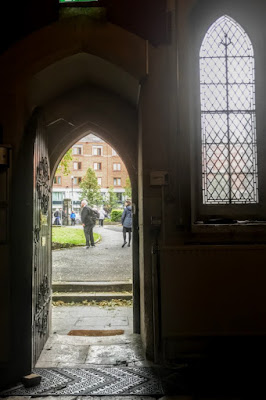 Another chapter closes … the door of the chapter house at Christ Church Cathedral early this afternoon (Photograph: Patrick Comerford, 2019)