Saint Editha’s Church, Tamworth, a large
church with a unique story and features 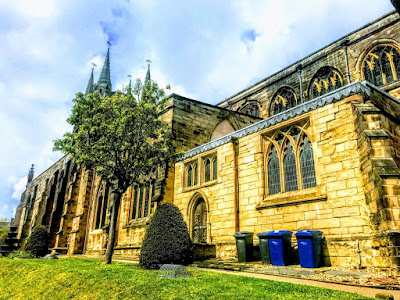 Saint Editha’s Collegiate Church Tamworth … one of the largest and oldest parish churches in the English Midlands (Photograph: Patrick Comerford, 2019)

Tamworth and District Civic Society recently asked me to give a lecture on the history of the Comberford and Comerford families in Saint Editha’s Collegiate Church, the parish church of Tamworth.

I was speaking in Saint George’s Chapel, and my talk was followed by a reception in the Comberford Chapel, two of the main side chapels in Saint Editha’s Church.

The church is especially notable for its Norman work, its monuments, its Pre-Raphaelite and other windows by Edward Burn Jones, William Morris and Ford Madox Ford, and for the restoration works in the 19th century by great Victorian architects, including Benjamin Ferrey and George Gilbert Scott (1850s), and William Butterfield (1871).

A large and magnificent church 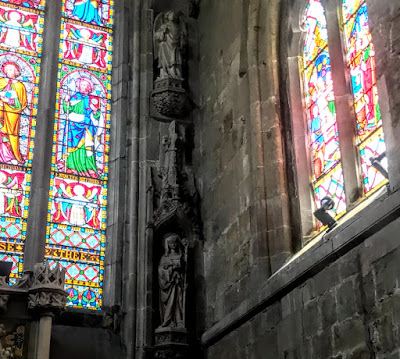 Saint Editha depicted in a statue in south-east corner of the chancel (Photograph: Patrick Comerford, 2019)

Many people wonder why Tamworth, a relatively small market town for most of its history, has such a large and magnificent parish church. The answer is found in the history of Tamworth, dating back to Saxon days 1,200 years ago, when this became an important settlement of Mercia.

Saint Augustine was sent from Rome in 587 on a mission to the Anglo-Saxons, and 70 years later, in 667, Saint Chad became Bishop of Lichfield. It is thought he visited nearby Tamworth and an early church soon stood on today’s site of Saint Editha’s Church.

A century later, Tamworth was the capital of Mercia, the principal kingdom in England. King Offa (775-796) built his great palace at Tamworth and kept the great feasts of Easter and Christmas here, so the church in Tamworth was probably of some size and splendour.

No less than 14 royal charters were issued from Tamworth Between 796 and 857, many of them witnessed by senior church figures. Tamworth was invaded by the Danes in 874, the town was sacked and the church was destroyed. But in 913 Aethelfleda, Lady of the Mercians and daughter of King Alfred the Great, drove back the Danish invasion and rebuilt the town and church.

Attempts were made to negotiate a peaceful settlement between Mercia and Northumbria in 925, where Sigtrygg the Dane was king. A marriage was arranged between King Sigtrygg and Aethlefleda’s niece, Editha, sister of King Athelstan of Mercia. The wedding took place in the presence of King Athelstan and solemnised by Bishop Ella of Lichfield.

But Sigtrygg soon lapsed from Christianity, the marriage was never consummated, and Editha returned to Tamworth and entered a convent at Polesworth. Here she devoted her life to the poor and sick, and was the abbess of a convent in Tamworth until she died in 960. When the church needed a dedication, the local people asked for Editha’s name, and so she became a saint by popular acclaim.’

However, the story of pillage continued, and in 943 the Danes razed Tamworth again and its church was destroyed, only to be rebuilt by Kind Edgar in 963.

Baldwin de Witney, Dean of Tamworth, rebuilt the church after the great fire in in 1345 (Photograph: Patrick Comerford, 2019)

The great Norman church was built in 1080, probably as an extension of King Edgar’s church and it was at least as long as the present building (190ft), in the shape of a crucifix and with a central tower over the crossing.

There is a deeply splayed round-headed window on the south side of the chancel, which in the 12th century was an outside wall. This window has beautifully twisted columns with cushion capitals externally, and a delicately carved string course underneath. 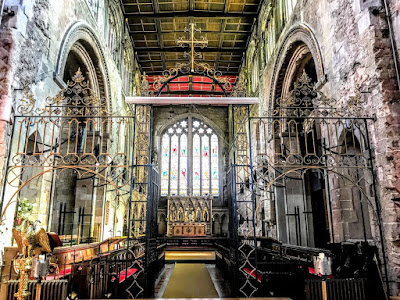 There are two great Norman arches in the chancel, but originally there were four. The four arches carried the tower and the position of the two former transverse arches can be traced by the roughness of the walls showing where they were cut away. Remnants of the zig-zag moulding of the Norman screen wall – originally grey stone, but burned a deep red by fire – still face the nave.

Tamworth was a collegiate church, and although it was not a cathedral it had a dean and a college of six prebendaries or canons, supported through the tithes of neighbouring parishes. 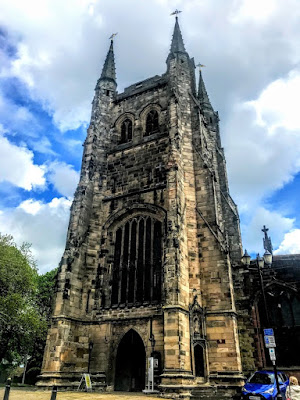 A fire destroyed Tamworth and the parish church on 23 May 1345, leaving only the large transept arches and portions of the quire, the west walls of the nave, and the north aisle with porch. But over the space of 20 years, the church was rebuilt by the Dean of Tamworth, Baldwin de Witney, despite untold difficulties, including poverty, war and the terrible Black Death. He died in 1369 and is buried in Saint George’s Chapel.

The great West Tower was built between 1380 and 1420. The height to the battlements is 30 metres, with the highest weathervane at 42 metres. The tower has a unique double helix spiral staircase that is just under two metres in diameter. There are 106 outer steps and 101 inner steps, so that two people can climb the tower at the same time without seeing each other until they reach the top. The tower is unusual in England, and the only other examples are in Much Wenlock and Pontefract.

The College of Canons and their vicars survived until 1547, when it was dissolved at the Reformation and Saint Editha’s became the parish church of Tamworth. 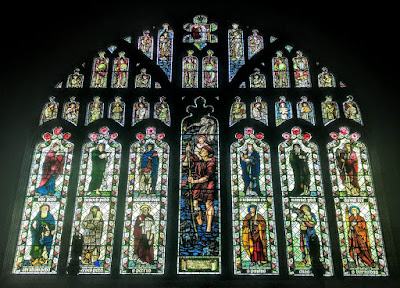 Visitors to Saint Editha’s are easily taken aback by the windows in the church, and by the number of side chapels, dating back to its days as a collegiate church with a large number of priests, each in need of an altar to celebrate Mass daily.

The real treasure in the church is the Pre-Raphaelite East Window in Saint George’s Chapel by Sir Edward Burne-Jones. This window is a memorial to Sir John Peel (1804-1872), MP for Tamworth. The window, known as ‘Angels of Creation,’ connects the story of the six days of creation with redemption. The glass is by William Morris. The central figure is Saint Christopher carrying the Christ Child, and lower panels depict Old Testament prophets and New Testament saints. 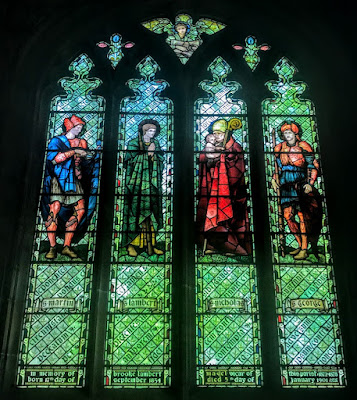 Saint George’s Chapel also has four sets of four-light windows, including one set by Burne-Jones and William Morris, one by William Morris and two sets by the Camm Brothers. 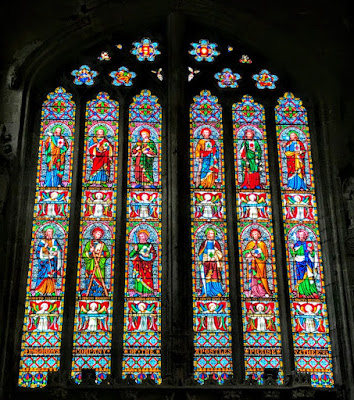 The great East Window, designed by William Wailes, is filled with figures representing the 12 Apostles. The Marmion Windows, high up in the clerestory on the south side of the church, tell the legend of Saint Editha. They were designed by Ford Maddox Brown with glass by William Morris and installed in 1873.

There are three war memorial windows in the north aisle. The western-most window by Henry Holiday depicts Christ the King and is dedicated to Tamworth parishioners who died in World War I. The middle window, also by Holiday, depicts Life, Death and Resurrection, and recalls the Revd Maurice Berkeley Peel, Vicar of Tamworth (1915-1917) and grandson of Sir Robert Peel, who was killed in France in 1917.

The third, eastern-most window, by Gerald ER Smith, shows the Risen Christ in Glory and takes the theme of the canticle Te Deum, with angels, prophets, the ‘glorious company of apostles,’ the ‘noble army of martyrs’ and ‘the Holy Church throughout the World.’ It is dedicated to the men of the parish who died in World War II. 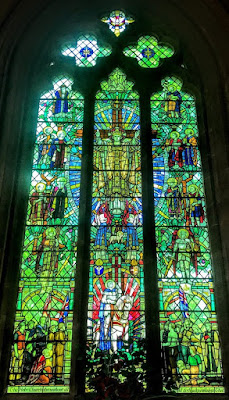 The chapels include Saint George’s Chapel, the Lady Chapel and the Comberford Chapel.

Saint George’s Chapel was built in the late 14th and early 15th century. A smaller chantry may have been here as early as the 12th century. 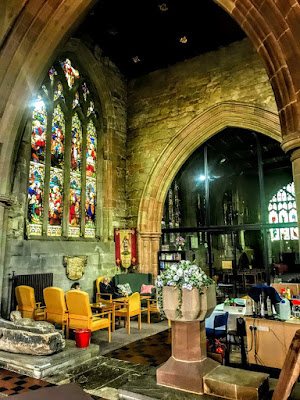 The Comberford Chapel in the former north transept was built by the Comberford family of Comberford Hall, north of Tamworth, who also had a townhouse in Tamworth at the Moat House on Lichfield Street.

The monuments in the Comberford Chapel include a fragment of a 15th century effigy of a knight, and a wall tablet with a Latin inscription erected in 1725 by members of the Comerford family in Ireland to members of Comberford family of Staffordshire. 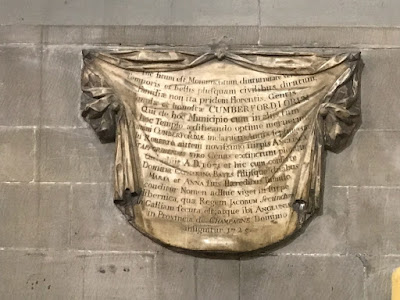 The monument erected in the Comberford Chapel in 1725 by the Comerford family of Ireland (Photograph: Patrick Comerford, 2019)

The Lady Chapel has a small altar with iron gates and a votive stand. 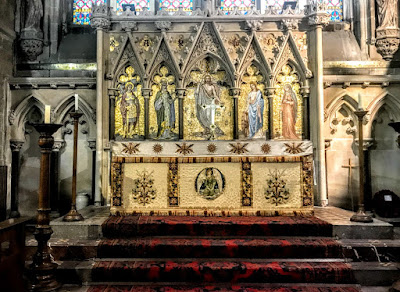 In the chancel, the High Altar and the reredos were designed by Sir George Gilbert Scott, John Birnie Philip and Antonio Salviati. Pevsner describes the 18th century wrought iron screen as ‘elegant but modest.’

The pulpit replaced an oak three-decker pulpit in 1870, and the eagle lectern dates from 1875. 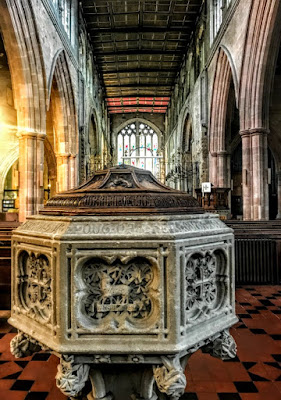 The ornate, octagonal Baptismal Font is carved from Caen stone from Normandy in North France and was designed by Sir Gilbert Scott in 1853. It replaced a simpler one, earlier font and the carvings include the Dove of Peace and the Lamb of God.

The present organ, fitted in 1926, is the third organ in the church. It cost £4,776 and was built by Harrison and Harrison of London and Durham. The electronically controlled blowing apparatus is housed in an underground chamber in the churchyard.

A brass plaque on the west wall remembers Private Samuel Parkes, one of the first recipients of the Victoria Cross for his bravery at the Charge of the Light Brigade in Balaklava in 1854.

Looking to the future 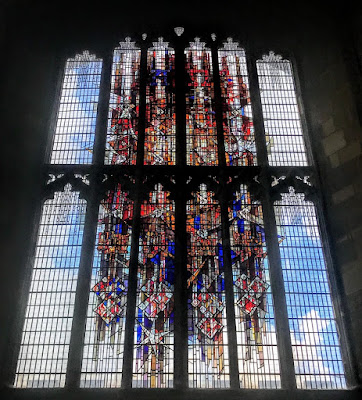 The Great West Window by Alan Younger is inspired by Saint John’s closing vision in the Book of Revelation (Photograph: Patrick Comerford, 2019)

But perhaps the most beautiful, modern feature in Saint Editha’s Church is the captivating Great West Window, ‘Revelation of the Holy City,’ designed by Alan Younger (1933-2004), one of the most important stained-glass artists in post-war Britain.

This window, unveiled by Princess Margaret in 1975, takes its theme from Saint John’s account in the Book of Revelation of the New Jerusalem, a new heaven and a new earth (Revelation 21-22).

In many ways, it is a bright symbol of a church that is rooted in over 1,200 years of history, lives in the present, and looks forward to the future in confidence and faith.

Canon Patrick Comerford is priest-in-charge, the Rathkeale and Kilnaughtin Group of Parishes. This feature was first published in July 2019 in the ‘Church Review’ (Dublin and Glendalough).