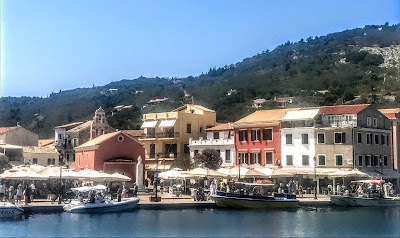 The harbour of Gaios, the main port on the east coat of Paxos (Photograph: Patrick Comerford, 2019)

‘Island Hopping’ is one of the popular images of a holiday in the sun in Greece. This is more difficult on a holiday in Crete, which has a small number of offshore islands but is not part of an extended archipelago.

Island hopping is more adventurous from other bases, such as the Dodecanese in the eastern Aegean, the Cyclades, which include Santorini and Mykonos, and the Ionian Islands off the western coast of mainland Greece.

On previous visits to this part of Greece, I have enjoyed island hopping in the southern parts of the Ionian Islands, travelling between Zakynthos, Kephalonia and Ithaki. But during these two weeks which I am spending in Corfu, I have also spent a day visiting the paired islands of Paxos and Antipaxos.

Together, Paxos or Paxi and Antipaxos or Antipaxoi (Παξοί και Αντίπαξοι) together form the smallest island group in the Ionian Islands, and their collective name in Greek is a plural form. Until local government reforms in 2006, the province of Paxoi (Επαρχία Παξών), including Paxos and Antipaxos, was one of the provinces in the Corfu Prefecture. But this was abolished in 2006.

Today, these islands together form the municipality of Paxoi, which has an area of 30,121 sq km. Paxos is the largest of the islands, with a surface area of 76 sq km or just under 30 square miles. It is about 13 km long, 5 km wide and tipped up towards the west.

In Greek mythology, Poseidon created the island of Paxos by striking Corfu with his trident, making a place of peace and quiet for himself and his wife Amphitrite.

Paxos may have been inhabited from prehistoric times, but the Phoenicians are the first recorded settlers on the island. The name of Paxos is said to be derived from Pax, referring to the trapezoidal shape of the island.

The Battle of Paxos was fought between the ancient Greek and Illyrian fleets during the First Illyrian War in 229 BC. The battle is described by Polybius, the Greek historian of the Hellenistic period, whose great work The Histories covered the period of 264 BC to 146 BC (see The Histories, Book 2, Chapter 2).

The Romans ruled Paxos from the second century BC. Paxos was constantly attacked by pirates during the Byzantine period and well into the Middle Ages. After various rulers and the Crusaders had passed through Paxos, the island was captured by the Venetians at the end of the 14th century, and remained a part of the Venetian empire for about four centuries.

During the Napoleonic wars, the Ionian Islands were captured first by the French and then by a Russian-Ottoman alliance. On 13 February 1814, the island of Paxos surrendered to the British naval frigate HMS Apollo commanded by Captain Charles Taylor and a combined force of 160 troops from the 2nd Greek Light Infantry from Kephalonia and the 35th Regiment of the Royal Corsican Rangers. 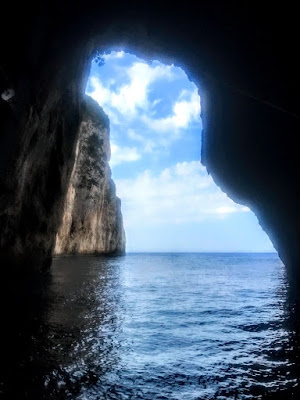 In the ‘Blue Caves’ on the west coast of Paxos (Photograph: Patrick Comerford, 2019)

The first stop on the ‘island-hopping’ boat trip was on the west coast, which is dominated by steep white, chalky cliffs that are greatly eroded at sea level, and to visit some of the many ‘blue caves’ that are explored every day by the small boats from Corfu.

We then sailed down the west coast of Paxos to neighbouring Antipaxos (Αντίπαξος), a small island covering 5 sq km, about 3 km south of Paxos and with a tiny population of 20.

Antipaxos is known for its wine and two of the finest sandy beaches in the Ionian Sea. This tiny island is largely covered in vineyards, and has several beaches and one harbour, Agrapidia. The three main beaches are Vrika (white sand), Mesovrika (pebbles) and Voutoumi (pebbles).

After swimming in the clear blue and turquoise waters of a small cove south of Voutoumi on the north-east side of the island, it was a 15-minute journey to Gaios, the main port and harbour in Paxos. 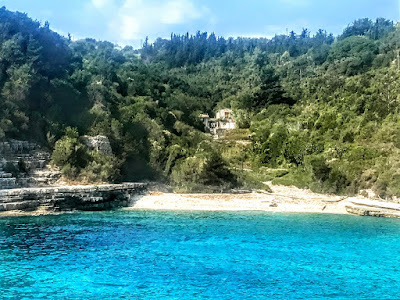 A small quiet cove south of Voutoumi on the north-east side of Antipaxos (Photograph: Patrick Comerford, 2019)

Paxos, with a population of about 2,500, remains one of the least commercial Islands in the Ionian Sea and is truly beautiful, with scenery that has made it an artists’ paradise, with clear aquamarine sea and pebble beaches that have to be seen to be believed.

Olive oil, soap and fishing were the main economic activities until they were supplanted by tourism in the mid-1960s. This brought a building boom that has greatly changed the coastline around Gaios.

Although Gaios is largest town on the island, it is still relatively small and quaint with Venetian architecture, a maze of side streets and a pedestrianised square on the seafront. 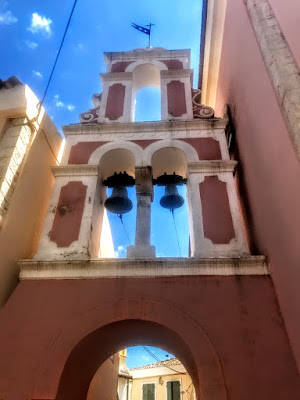 The bell-tower of a church in the narrow streets of Gaios (Photograph: Patrick Comerford, 2019)

Restaurants and snack bars are scattered throughout the town, offering a high standard of local Greek cuisine, and the facilities include two book shops, a post office, banks, chemist, doctor’s surgery, gift shops, gymnasium, jewellery and craft shops, as well as supermarkets, bakeries and butchers, and a range of waterfront bars.

Semi-permanent British inhabitants of Paxos have included Audrey Good, former commander of the UN refugee bases in Epirus following the Greek Civil War; the late actor Peter Bull (author of It isn’t all Greek to me); and the actor Susannah York.

Some members of the Agnelli family of FIAT have built a palatial holiday home – complete with a faux mediaeval tower – on the small island of Kaltonisi near the southern tip or heel of Paxos, close to the popular beach of Mongonissi.

These arrivals and the development of the coastal area, mostly by Italians, are said to have made Paxos one of the most expensive places in Greece to buy property.

Ferries, hydrofoils, small boats and sea taxis arrive constantly throughout the day at the port of Gaios. But they leave in the late afternoon, and once again Gaios becomes a picture-postcard Greek harbour town.

But as we sailed out of Gaios in the afternoon sun, we could see that much of the landscape of Paxos is still covered in olive groves that stretch from Gaios through Magazia to Lakka, the harbour community in the north.

We were back in Mesongi on the east coast of Corfu late in the afternoon, and from there returned to Agios Georgios. 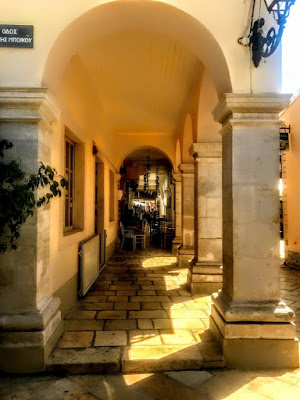 Arcaded shops off the main square of Gaios in Paxos (Photograph: Patrick Comerford, 2019)