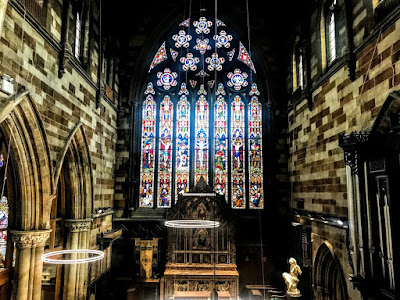 The East End of Saint Mary’s Church, Lichfield, has been retained in the recent transformation into a library and performance centre (Photograph: Patrick Comerford, 2019)

Earlier this morning [19 September 2019], I wrote about the Hedgehog Vintage Inn in Lichfield, which was once known as Lyncroft House and had been the home of many interesting people in Victorian Lichfield, including the composer Muzio Clementi (1752-1832) and the Revd Henry Gylby Lonsdale (1791-1851), who lived there when he became Vicar of Saint Mary’s in Lichfield in 1830 – at the time there was no vicarage for Saint Mary’s.

Saint Mary’s Church is a city centre church on the south side of the Market Square. A church is said to have been on this site since at least 1150. The present building dates from 1870 and is a Grade II* listed building. In recent months it has found new life as a library and arts centre, and so it was a pleasure to visit the church yesterday [18 September 2019]. 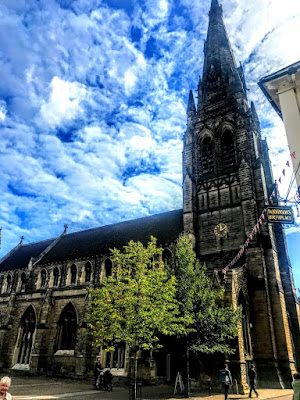 Saint Mary’s Church, Lichfield, is the fourth church built on this site on the Market Square and stands beside the Samuel Johnson Birthplace and Museum (Photograph: Patrick Comerford, 2019)

Standing opposite the church, the Samuel Johnson Birthplace and Museum was the childhood home of Samuel Johnson, and the church register, dating from 1566, records his baptism 310 years ago on 17 September 1709.

Saint Mary’s acquired a special prominence in the city at this time as the guild church of the Guild of Saint Mary and Saint John the Baptist, founded in 1387 by the amalgamation of two existing guilds. The guild chaplains were expected to help with the daily services in the church and to be present at the Mass of Saint Mary and the anthem Salve Regina each day. The guild continued to run the affairs of the city until 1538. 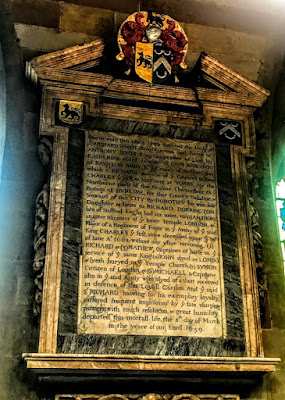 From the 17th century, the north side of Saint Mary’s Church has been the Dyott Chapel, the burial place of members of the Dyott family of Freeford (Photograph: Patrick Comerford, 2019)

The mediaeval tower and spire of the church had structural failings over the years, and the spire fell down in 1594 and 1626. Extensive repairs were carried out in the 17th century but when the spire fell yet again in 1716 it was decided to rebuild the church. This church was designed by the architect Francis Smith of Warwick in the neoclassical style and stood from 1721 to 1868. 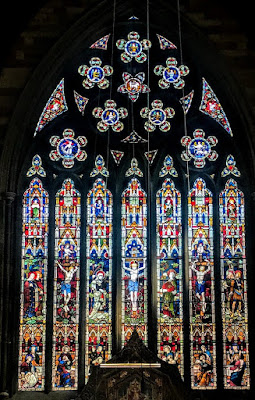 The new church building was funded by public subscription, the Conduit Lands Trust and the Lichfield Corporation, and the church was completed in 1721. These years of construction were probably overseen by Samuel Johnson who would have experienced his early childhood in the house facing onto the church. 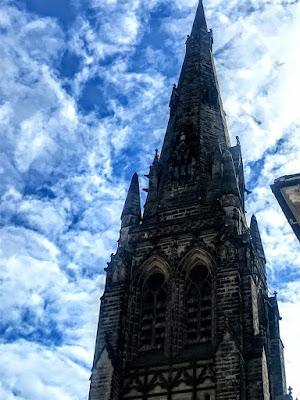 The tower and spire of Saint Mary’s Church have been rebuilt many times (Photograph: Patrick Comerford, 2019)

The building in Derbyshire sandstone was completed in a Victorian Gothic style after two years work in 1870. The architect was James Fowler of Louth, Lincolnshire, who was born in Lichfield, but it is not known whether he used any of Street’s original designs. The completed church included a chancel, the Dyott chapel on the north side, an aisled nave of four bays, and the remodelled tower and spire. 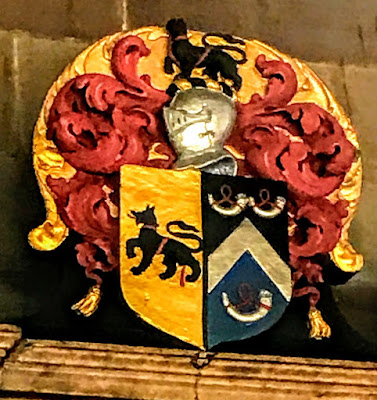 The Dyott coat-of-arms on one of the many Dyott family monuments in the Dyott Chapel (Photograph: Patrick Comerford, 2019)

However, there is no evidence that Saint Mary's ever had a churchyard, and while there were some burials inside the church, parishioners were buried in the churchyards of Saint Michael’s and Saint Chad’s, which explains why Samuel Johnson’s family are buried at Saint Michael’s.

The Lonsdale family, who met much of the cost of the new building. The Vicar of Saint Mary’s, the Revd Henry Lonsdale, came from a clerical family that had Anglican clergy in at least four successive generations. 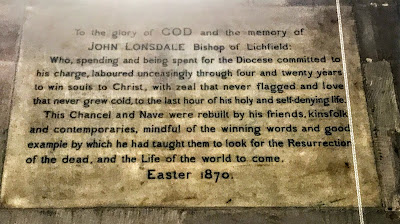 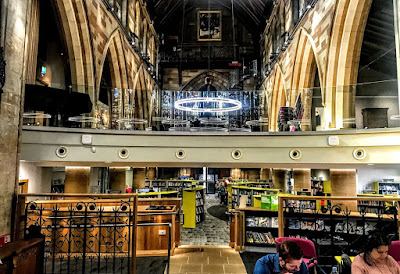 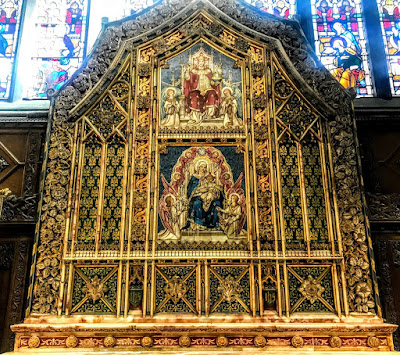 The reredos behind the High Altar in Saint Mary’s Church (Photograph: Patrick Comerford, 2019)

The remodelled church had five sections: a social centre for senior citizens; a café; a tourist information office and gift shop; the Lichfield Museum and heritage exhibition; and the Dyott Chapel at the north end, which continued to be used as the parish church of Saint Mary.

Over the past two years, Saint Mary’s has undergone an amazing transformation, with the City Library on the ground floor, while the first floor includes exhibition and performance space, as well as an access point for digitised archive collections.

The stained glass of the East Window reflected in the new gallery balcony (Photograph: Patrick Comerford, 2019) 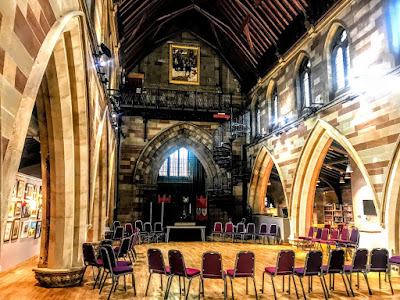 This new Saint Mary’s was the winner of the Royal Institution of Chartered Surveyors (RICS) Conservations Award this year (2019).

Richard Winterton, the family firm of auctioneers that has been part of life in Lichfield for seven generations, has launched weekly valuations from 9.30 to 12.30 on Mondays, giving free valuations, advice and help. 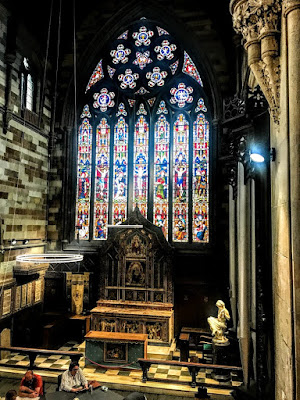 The former chancel of Saint Mary’s Church seen from the balcony on the first floor (Photograph: Patrick Comerford, 2019)

I see that the altar from the Dyott Chapel has been placed in front of the High Altar. Originally it came from the Children’s Chapel, which is where the lift shaft now is. I wonder if they’ll continue to turn it around so that the Noah’s Ark scene can be better viewed than the Nativity.

The monument to Prebendary Cresswell reminds me of the times I looked after the Church Office on a Friday evening, especially during the interregnum between Rev’d Derek Smith and Rev’d David Beedon. The study had been emptied of most books and on one occasion I forgot to take a book with me, for those quiet spells when no one wanted to book a wedding or a baptism. So, I picked up a notebook lying there. It turned out to be the PCC Minutes from Prebendary Cresswell’s time, handwritten in a scholarly hand.

Most of the contents were mundane but then a section describes how the widowed Vicar of St Mary’s and his daughter were reduced to close rooms off because they couldn’t afford to heat them. This was St Mary’s house, of course, now the Diocesan Offices.