A few days in Bratislava,
the capital of Slovakia 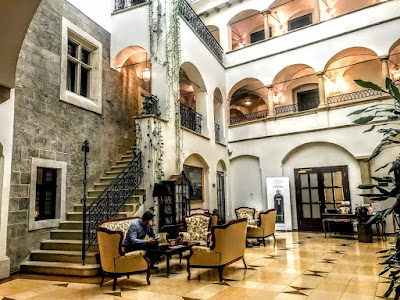 The Arcadia Boutique Hotel on Frantiskanska Street is in the heart of the old city of Bratislava, a building that dates back to the 13th century (Photograph: Patrick Comerford, 2019)

I am in Bratislava, the capital of Slovakia, for the next few days, celebrating some landmark dates in the family. I arrived on a Ryanair flight from Dublin earlier this morning [5 November 2019] and I am staying in the Arcadia Boutique Hotel on Frantiskanska Street, in the heart of the old city.

I have already strolled through the old town this afternoon, and the attractions on the doorstep include Saint Martin’s Cathedral, Gothic churches, palaces and castles, the Museum of Jewish Culture, the banks of the River Danube and the other sites that make this a charming European capital.

During the Third Crusade (1189-1192), it is said, the Emperor Frederick Barbarossa stayed at a building on this site. The hotel building claims to date back to 1290, with memories than date back seven or eight centuries, housed in mediaeval buildings that have been transformed into a romantic hotel, but retaining its vaults, old ceilings and winding corridors.

Evidence of a Celtic settlement in the area in the 3rd century BC has been found in the cellar, archaeological research has revealed indications of a Roman settlement at the site, and objects from the 12th and 13th centuries have been found in the hotel grounds. Inside, the building retains fine works in wrought iron from the Renaissance, Baroque and Classicism eras.

Františkánska Street was originally a street leading up to Bratislava Castle, and buildings were built on only one side of the street. The original buildings included the Franciscan Church with the Chapel of Saint John the Evangelist, the monastery garden and the Franciscan monastery.

In the first part of the 15th century, this street slowly developed into an area for craftsmen, including stonemasons, knife grinders and coopers, who worked alongside the city wall.

The building served as the headquarters of the Hussite movement in Bratislava in 1432. As a legacy from that time, a chalice as the symbol of the Hussites was carved in stone into one of the arcades in the building.

The hotel’s cellar, now used as a wellness area, is the oldest part of the building and offers a fine example of Gothic vaults. On the first floor, there are examples of late-Gothic wall ornaments and stone window frames.

The arcades in the central courtyard area, which now forms the hotel’s lobby area, are among the finest examples of Renaissance architecture in Slovakia. The Renaissance-era vaulted ceiling in the cocktail bar is decorated with Baroque ornaments.

During my few days here, I hope to post on this blog about my visits to churches, castles and the cathedral. I am planning to visit the remaining sites of Jewish Bratislava tomorrow [6 November 2019], and may even take the bus to neighbouring Vienna, the capital of Austria, which is about an hour away.

Join me over the next few days on this blog, if only for a cup of coffee or a glass of wine, as I explore what for me is a new venture in a new European capital. 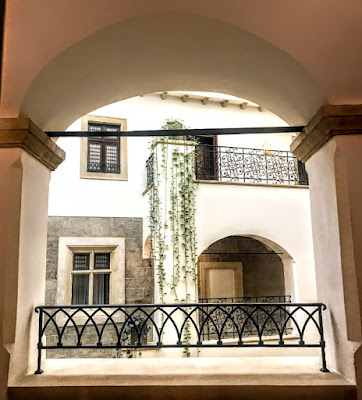 Parts of the hotel are said to dates back to the 13th century (Photograph: Patrick Comerford, 2019)