A weekend at
a family wedding
in Markree Castle 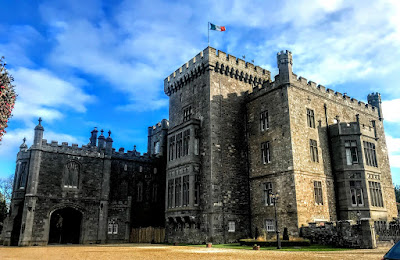 Markree Castle, near Collooney, Co Sligo … this was once the coldest place in Ireland (Photograph: Patrick Comerford, 2019)

I have been staying at Markree Castle, near Collooney, Co Sligo, taking part in a family wedding in Sligo Cathedral.

The hymn-writer Cecil Frances Alexander (1818-1895) is said to have written the hymn All Things Bright and Beautiful while she was a guest of the Cooper family here in 1848.

But, in the midst of all that is beautiful, this may also be the coldest place in Ireland too. The temperature rose above 9°C this afternoon, but it had been hovering around 3°C here this weekend, and it has been even colder here in the past: Ireland’s lowest officially recognised air temperature, −19.1°C (−2.4°F), was recorded at Markree Castle on 16 January 1881. 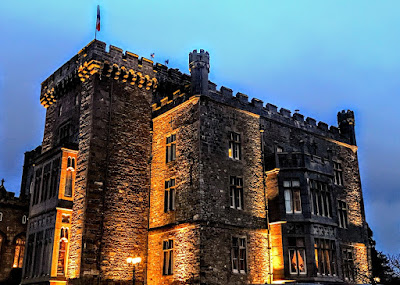 During the 1830s, the observatory on the grounds of the castle had the largest refracting telescope in the world. What is known today as the asteroid 9 Metis was discovered in the 1840s by the staff at the Coopers family’s observatory.

The Royal Astronomical Society reported in 1851, ‘The Observatory of Mr Cooper of Markree Castle – undoubtedly the most richly furnished private observatory known – is worked with great activity by Mr Cooper himself and by his very able assistant, Mr Andrew Graham.’ 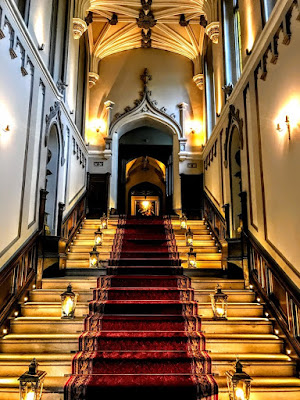 Markree Castle, which is partially moated by the River Unshin, is the ancestral seat of the Cooper family. But before that, this was once a fortified castle that belonged to the McDonagh Clan, and it guarded the ford across the River Unsin.

The castle, as we see it today, dates from 1802 with exterior changes by the architect Francis Johnston. Some later changes, mainly to the interior, were made in in the late 1860s and in the 1890s.

Edward Cooper was a cornet or junior officer in a Cromwell’s army in a Cromwellian regiment of horse commanded by his cousin, Colonel Coote. Later, Cooper was allotted the 14th-century Markree Castle and the surrounding lands and moved in here in 1663. 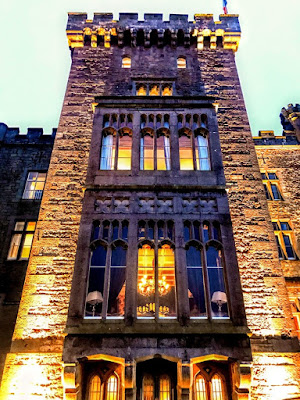 James II is said to have stayed at Markree Castle (Photograph: Patrick Comerford, 2019)

During the Williamite wars at the end of the 17th century, the Cooper family fled Markree Castle while it was occupied by the army of James II. They returned to live at Markree Castle after William III’s victory at the Battle of the Boyne in 1690, and continued to live here until very recently.

Over the generations, the Coopers intermarried with other prominent local families, including the Cootes, Wynnes and Synges, and by the 1720s, Joshua Cooper (1694-1757) was one of the largest landowners in Co Sligo, with over 40,000 acres. 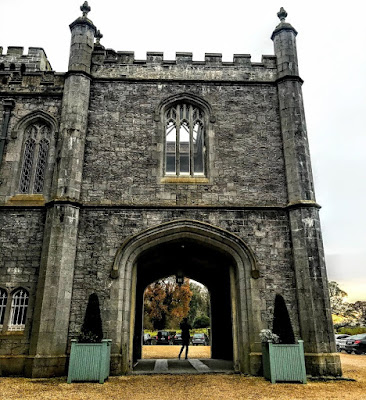 Markree Castle has been home to generations of the Cooper family (Photograph: Patrick Comerford, 2019)

The castle was inherited by his son, Major Bryan Ricco Cooper (1884-1930), who was born in Simla in India. He was briefly a Unionist MP for South Country Dublin (1910), and was involved in the Gallipoli landings during World War I.

During the Irish Civil War in the 1920s, Markree Castle was again occupied briefly by the Irish Free State army.

Brian Cooper returned to live at Markree Castle, and was one of the few former Westminster MPs to be elected to Dáil Éireann. He was an Independent and later a Cumann na nGaedheal (Fine Gael) TD for South Country Dublin (1923-1930). He sold most of the 30,000-acre estate surrounding Markree Castle, but lived on at the castle with his family until he died in 1930. 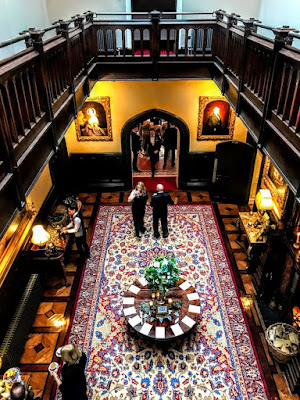 After World War II, Markree Castle fell on hard times and stood empty and derelict for many years. It featured on the front cover of The Vanishing Country Houses of Ireland in 1988, illustrating the sad state of decay of many great houses at the time.

Charles Cooper transformed his ancestral castle into a hotel in 1989. The castle’s restoration was featured in a television documentary, and the renewed facilities included a hotel and restaurant.

Markree Castle was run as a hotel by Charles and Mary Cooper, the tenth generation of the family to live here. After four centuries, the castle finally changed hands in 2015 when it was sold for an undisclosed sum after being on the market with an asking price of €3.12 million. The hotel is now run by the Corscadden family.

The Markree Castle we see today was built in 1802 over the raised basement stone of the former Cooper family mansion known until then as Mercury, and contains parts of the earlier houses. 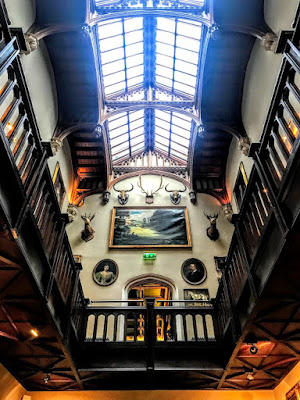 The castle is an imposing and impressive example of the Gothic Revival style. It is a 12-bay, three-storey country house, built in stone, with a raised basement. It was designed by Francis Johnston (1760-1825) ca 1802-1805 for Joshua Edward Cooper, incorporating parts of the earlier houses and tower houses on the site.

The castle was extensively enlarged, remodelled and rebuilt from 1866 by the Edinburgh-born architect James Maitland Wardrop (1824-1884) for Colonel Edward Henry Cooper. 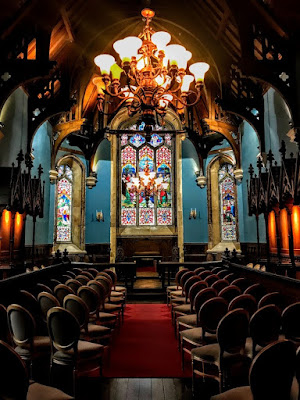 Wardrop’s additions in the late 1860s and early 1870s include the Gothic Revival porte-cochere, the battlemented and machicolated square tower with a two-storey, square profile oriel window, the chapel on the north front, and the two-storey, canted bay window on the west front. The ornamental doorway at the garden front was added in 1896.

The porte-cochére was a fashionable architectural statement at the time. In 1876, Lady Beaumont added one to Drishane Castle at Millstreet, Co Cork, where it is a fine example of theatrical architecture, and there are similar features at Farmeligh House in Dublin, Muckross House in Killarney, and Cahermoyle House in Co Limerick. 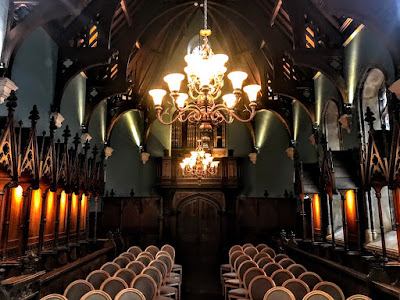 The entrance contains a monumental staircase that leads to a wonderful hall, from where a second staircase in carved wood leads to the 30 guest rooms. A large stained glass window on the staircase fancifully traces the Cooper family tree from Victorian times back to the reign of King John.

Inside, the castle is opulently decorated in decorated in a florid, classical style, and the castle retains much of its original or early fabric, including fine-stained glass windows. The dining room, where we had dinner last night, is decorated in Louis Philippe-style stucco plasterwork.

The 300-acre estate surrounding the castle is home to an array of wild life including red squirrels, otters, and kingfishers. 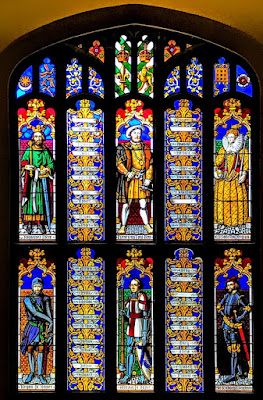 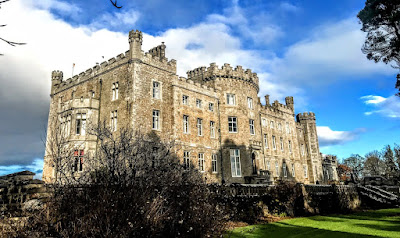 Markree Castle in the sunshine this afternoon (Photograph: Patrick Comerford, 2019)