The Peterskirche is
‘a psychedelic Easter
egg’ in Vienna 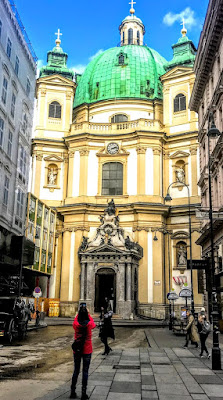 The Peterskirche in the centre of Petersplatz … claims to be the oldest church in Vienna (Photograph: Patrick Comerford, 2019)

My visit to Vienna on Thursday [7 November 2019] was short and brief. I concentrated on visiting the Stephansdom or Saint Stephen’s Cathedral, and the Jewish quarter with its museums and the only synagogue to survive after World War II.

But I also visited two churches in the heart of Vienna: the Greek Orthodox Cathedral of the Holy Trinity; and the Peterskirche, or Saint Peter’s Church, is a Baroque parish church to be designed as a miniature replica of Saint Peter’s Basilica in Rome.

One writer has said, ‘Experiencing the Peterskirche is like opening a psychedelic Easter egg. It looks nice on the outside, with its domes, reliefs and statues. Then, when you go inside, you’re hit by a dizzying wave of colour and form that is really quite breath-taking.’

The Peterskirche stands in the centre of Petersplatz square, just off the busy Graben pedestrian area and is surrounded by 18th and 19th century buildings. The church is largely obscured by the surrounding buildings, and can only be seen clearly by standing directly in front of it.

That Roman church was replaced with a Romanesque church with a nave and two aisles. It is said to have been established by Charlemagne ca 800, and a relief sculpture by R Weyr outside the church commemorates the founding of the church by Charlemagne. However, there is no evidence supporting this theory.

The first documented reference to a church on this site dates from 1137. Around the end of the 12th century, the church became part of the Schottenstift, a Benedictine abbey founded in Vienna by Irish (Scots) monks who came from Regensburg.

The mediaeval church had three altars, with the apse in the south instead of the traditional east end. This south-north rather than east-west orientation is unusual and has caused many discussions and debates.

The church may have been adapted from an earlier, secular building. It was surrounded by shops, and a nearby building housed the Stadtguardia, a forerunner of the modern police.

The old church burned down in 1661 and the repairs at the time were only makeshift repairs. A few decades passed before a decision was taken to build a new church, following the arrival of the Fraternity of the Holy Trinity. The Emperor Leopold I was a member of this fraternity, and he had vowed to rebuild this church when Vienna was ravaged by the plague in 1679-1680.

Work on building a new Baroque church was begun ca 1701 under Gabriele Montani, who was replaced by Johann Lukas von Hildebrandt in 1703. The design was inspired by Saint Peter’s Basilica in the Vatican.

Most of the building was finished by 1722, and the Peterskirche was consecrated to the Holy Trinity in 1733. The new church was the first domed structure in baroque Vienna. Due to the confined strictures of the site, the church was built in a very compact form, with its oval interior accommodating an astonishing amount of space and rectangular attachments.

Despite the initial visual impact, this is not a spacious basilica or cathedral. It essentially comprises an entrance foyer, the oval-shaped domed area with niches that form small side chapels, and the high altar area.

The turreted dome was designed by Matthias Steinl, who was also responsible for the richly-decorated interior filled with golden stucco work and the pews with their cherubic heads.

The frescoes were first painted by the Italian Andrea Pozzo. But they were removed after his death, and Johann Michael Rottmayr began working on a completely new set in 1713.

The fresco in the cupola represents the ‘Coronation of Our Lady.’ The triumphal arch displays the coat of arms of emperor Leopold I. The four Evangelists and four Fathers of the Church in the spandrels around the dome were painted by the Viennese artist JG Schmidt, who also painted the altarpiece in the side chapel of Saint Michael.

The Baroque high altar is the work of Antonio Galli Bibiena and his workshop in Bologna, and Martino Altomonte (1657-1745). The altarpiece portrays the ‘Healing of the Lame by Saint Peter and Saint John in Jerusalem.’

The shrines in the side chapels hold the relics of martyrs from Roman catacombs, donated by Cardinal Kollonitz in 1733. They were clothed in this period and placed in the glass coffins.

The gilded, ornate pulpit is the work of Matthias Steinl (1726). Opposite the pulpit is a dramatic gold-and-silver representation of the ‘Martyrdom of Saint John of Nepomuk’ by Lorenzo Mattielli. The Baroque organ was built in 1751.

The Peterskirche was transferred to Opus Dei in 1970 by the Archbishop of Vienna, Cardinal Franz König.

Meanwhile, over the years, the paintings became darker, and the interior began to take on a grey appearance. The church underwent renovations and restorations in 1998-2004, when the paintings were returned to their original rich colouring and brightness.