A 200-year-old church
in Loughill, Co Limerick,
with a tower and shrine 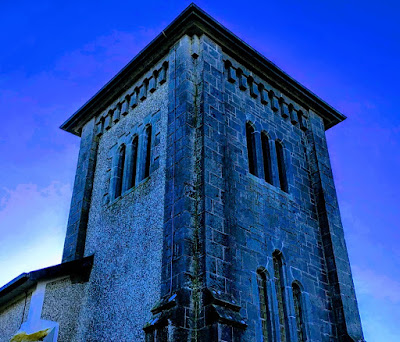 The Tower of Church of the Assumption in Loughill, Co Limerick (Photograph: Patrick Comerford, 2020)

The village of Loughill is between Foynes and Glin on the N69 route from Limerick to Tralee. The name comes from the Irish Leamh Choill, ‘the elm wood.’

The Owvaun or White River, a popular fishing river, meets the Shannon Estuary at Loughill.

Loughill’s development dates from the 12th century. In the past, there were ironworks in Loughill where the large supply of timber in the area was converted into charcoal for smelting iron ore. The village has seen modest housing development in the past 10 years and has a public house and a community centre.

Loughill was part of the Roman Catholic parish of Glin until Father Daniel McCoy, parish priest of Glin, died in 1855 when it became a separate parish.

There are two churches in the Roman Catholic parish today, one at Loughill, the other at Ballyhahill. 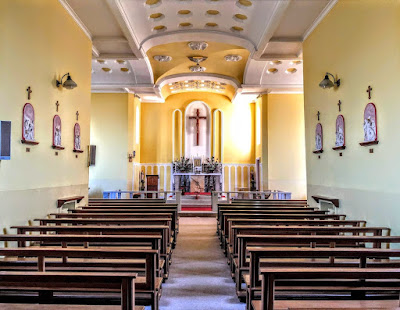 Inside the Church of the Assumption in Loughill (Photograph: Patrick Comerford, 2020)

The church in Loughill stands on an elevated site facing the man road. It was built in 1819 and is dedicated to the Blessed Virgin Mary. It is not clear whether William MacEnery or Daniel O’Sullivan was the parish priest when the church was built.

The church was rebuilt in the early 1960s, to designs by Patrick Sheehan. It has a nave, chancel and two transepts, with a shrine to Our Lady of the Wayside in the stone tower at the end of the nave.

A plaque in the porch recalls the church was blessed and rededicated as the Church of the Assumption by Bishop Murphy DD, and James O’Byrne, PP, on 12 February 1961, just over a decade after Pope Pius XII had proclaimed the Assumption as a dogma invoking papal infallibility. 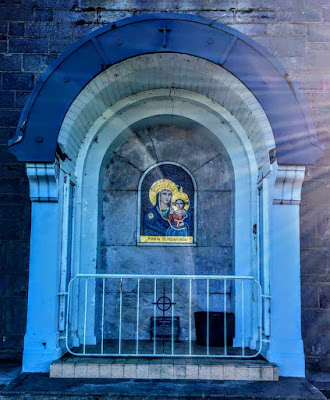 The shrine and tower conceal the main entrance to the church (Photograph: Patrick Comerford, 2020)

The shrine and stone tower conceal the main entrance to the church on the left, accessed by steep steps.

Thomas Fitzgerald of Loughill House, donated the crucifix behind the altar. The confessional box was donated by the McNamara family of the US and Knocknaboula. 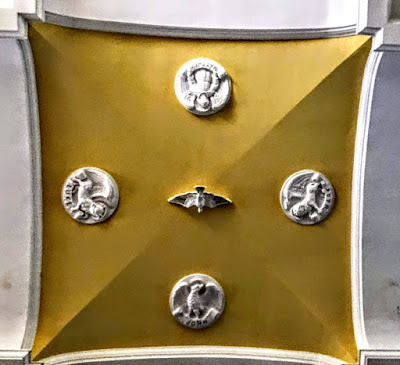 Symbols of the Four Evangelists in the stucco plaster work in the ceiling at the crossing (Photograph: Patrick Comerford, 2020)

There are symbols of the Four Evangelists in the stucco plaster work in the ceiling in front of the chancel.

The shrine to ‘Our Lady of the Wayside’ is in memory of Father James O’Byrne PP and his sisters. 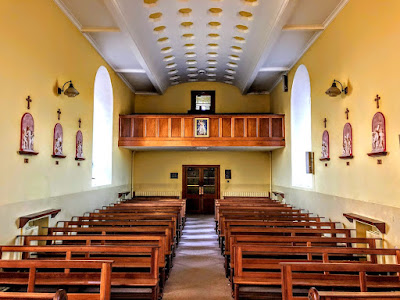 Inside the Church of the Assumption, looking towards the tower and gallery (Photograph: Patrick Comerford, 2020)

According to the local historian Westropp, there was an early church in Loughill before the present parish church was built in 1819. This church was dedicated to Saint Colmog, a hermit who had a little church in the area. It was said a holy well nearby could cure eye ailments.

However, only small fragments of the church remained when Westropp carried out his survey of the churches in Limerick in 1905. 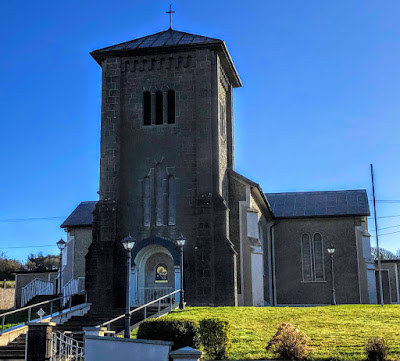 The church in Loughill was built on an elevated site in 1819 (Photograph: Patrick Comerford, 2020)