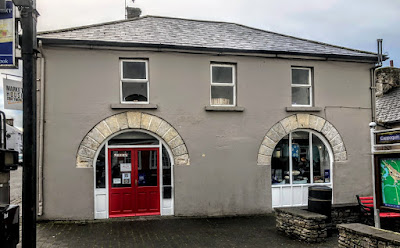 There has been a Market House in the centre of Cappoquin, Co Waterford, for almost 400 years (Photograph: Patrick Comerford, 2020)

The oldest streets in Cappoquin are probably Main Street, Church Street, Castle Street and Mill Street, which all developed as the early town settlement expanded in the 1700s.

The town developed earlier below the slopes of Cappoquin Castle, in the previous century. A bridge across the Blackwater made Cappoquin accessible to shipping from the 1620s because the Blackwater was tidal well beyond Cappoquin and it lay on the road network connecting west Waterford, south Tipperary and east Cork, an area I seemed to traverse constantly during this year’s summer ‘Road Trip.’

When Richard Boyle (1566-1643), the ‘Great Earl of Cork,’ took possession of the area around modern Cappoquin, he transformed the settlement into a town. Boyle had acquired Lismore Castle and larges tracts of land in West Waterford from Sir Walter Raleigh in 1602, following the Plantation of Munster. His son, Robert Boyle (1627-1691), is considered the father of modern chemistry.

Although Cappoquin was never a walled town, Boyle certainly recorded the existence of an earthen rampart running south of the town, probably at the south end of Castle Street. He built an iron works and a wooden bridge at the bend on the Blackwater, and leased the rights to hold fairs and markets in the area to Hugh Croker. He recorded in his diary on 3 April 1628 that, as part of this 21-year lease, Croker was to build ‘a fair market house with a prison, with lime and stone, and a sesssions [court] house over the market place, slated towards which building he is to have the whole benefit of my fairs and markets, free for the first five years and afterwards during the remain of his lease.’

Croker’s Market House is probably the oldest building in Cappoquin, dating in its original form from 1628. The Market House became the centre of commercial life in 17th century Cappoquin, and as the town grew and developed, the focal point of much of town became the area around the Square. This is the point where Castle Street, once the original route to Cappoquin Castle, meets the Square, Main Street, Green Street and Cooke Street.

The rampart mentioned by Boyle was breached on several occasions during the wars of the 1640s, with many skirmishes and civilian casualties at the time. The records show that seven people were killed at the Market House during those turbulent years.

A later, three-bay two-storey market house was built on the corner site ca 1775, with a round-headed arcade that was originally open on the ground floor, and with single-bay two-storey side elevations.

The Market House stands on a corner site, with the front or north-west elevation facing the Square, and a side elevation on the north-east facing onto Main Street.

The upper floor also served as a courthouse until the early 1970s, just as it had in Boyle’s days. A 17th century well was uncovered during building work nearby in the 1980s.

The Market House was extensively renovated ca 2000, when the openings were remodelled for commercial use on the ground floor, with residential accommodation above. After laying empty for many years, it was brought back to life by Market House Craftworks.

Market House Craftworks is a collective of three craftspeople – Joan Casey, Jane Jermyn and Len Canton – who use traditional methods to create contemporary craft objects in ceramic, leather, mosaic and felt in a studio and gallery setting in the heart of Cappoquin.

Joan Casey, a native of Waterford City, has been had-making felt for over 20 years, and has also developed a practice in mosaic-making. Len Canton, who is from Cork, has been working in leather for over 40 years. He and Joan live in the countryside near Lismore.

Jane Jermyn has been living in Lismore since 2003 and received an MA in ceramics from the National College of Art in 2009. Her work has been exhibited or displayed from Cuba to Siberia, from Britain to South Africa, and in India, Japan and South Korea.

These three set up the Lismore Craft Collective in 2014, and in 2019 moved to the Market House, which had been empty for seven years.

This is an appealing well-proportioned building that is of significance as the earliest surviving purpose-built market house in Cappoquin. Despite the recent renovations, the building still looks like a traditional market house in an Irish market town, with its characteristic arcade on the ground floor.

As far as anyone can tell, this has been a continuous trading centre in the town for almost four centuries. If so, local people claim, this may well be one of the oldest shop-sites in Ireland.

The Market House continues to have an emotional and cultural space in the life of Cappoquin, and the Market House and Square are the traditional departure points for all Cappoquin sports teams. 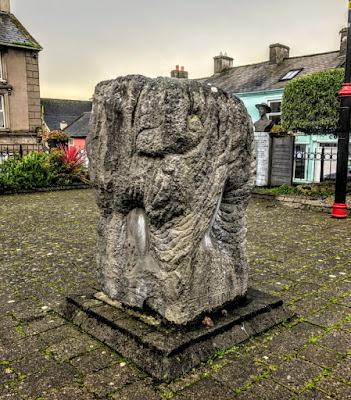 The Square remains at the heart of economic, social and sporting life in Cappoquin (Photograph: Patrick Comerford, 2020)