Saying the right thing
at the right time, and
putting it into practice 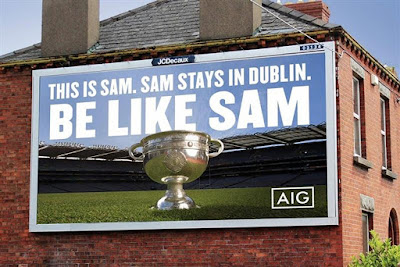 ‘This is Sam. Sam stays in Dublin. Be like Sam.’

He said to his sons, ‘Son, go and work in the vineyard today’ (see Matthew 21: 28) … working in a vineyard in Platanias, near Rethymnon in Crete (Photograph: Patrick Comerford, 2019)

It looks like the new Covid-19 figures mean we are facing a new series of pandemic lockdowns in the coming weeks.

We all agree that everything must be done for the sake of public health. But when it comes to our own lives, I and many like me are slow to change our own lifestyles, to bear our share of the burden.

We find it difficult to make the practical connections, the links, between what we say and what we do.

To illustrate that there must be a connection between our words and our deeds, the insurance group AIG has responded to the latest lockdown in Dublin and has paid for a new set of advertising hoardings with an image of the Sam Maguire Cup and the slogan, ‘This is Sam. Sam stays in Dublin. Be like Sam.’

To be consistent with what we say and what we do, the Dean of Trim, the Very Revd Paul Bogle, and I have had lengthy conversations in the past week and decided that it would send out all the wrong signals if we went ahead with the Harvest Thanksgiving service he was to preach at in Rathkeale next Friday (2 October 2020).

I hope we can still mark the Harvest and give thanks for it at our services next Sunday in Askeaton and Tarbert. But it is important that the Church is not only heard saying the right thing, but seen doing the right thing at this time of great public crisis.

In our Gospel reading this morning (Matthew 21: 23-32), Christ answers his critics with a two-part question. And as they are left mulling this over, he tells the parable of a father who sends his two sons, a willing son and an unwilling son, to work in the family vineyard.

The two sons remind me of that T-shirt I have joked about for years and that eventually I bought a few summers ago in the Plaka in Athens with these words:

The other son says: ‘I go, sir.’ In public, he appears to be what a good son should be.

There are times when we may find it difficult to do what God is asking us to do. We wait, we think, we ponder, but eventually we answer that RSVP and seek to do God’s will.

In the coming weeks, it may be a real challenge, but it is important that the church is heard and seen to be doing the right thing for the good of all. Our words and deeds must be consistent. 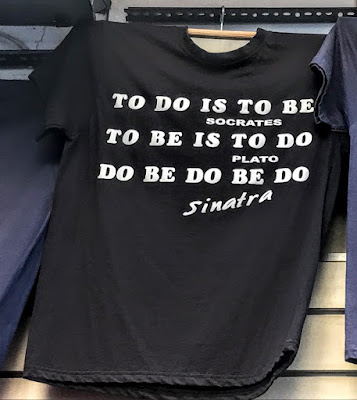 Doing and Being … advice on a T-shirt in the Plaka in Athens (Photograph: Patrick Comerford)

23 When he entered the temple, the chief priests and the elders of the people came to him as he was teaching, and said, ‘By what authority are you doing these things, and who gave you this authority?’ 24 Jesus said to them, ‘I will also ask you one question; if you tell me the answer, then I will also tell you by what authority I do these things. 25 Did the baptism of John come from heaven, or was it of human origin?’ And they argued with one another, ‘If we say, “From heaven”, he will say to us, “Why then did you not believe him?” 26 But if we say, “Of human origin”, we are afraid of the crowd; for all regard John as a prophet.’ 27 So they answered Jesus, ‘We do not know.’ And he said to them, ‘Neither will I tell you by what authority I am doing these things.

28 ‘What do you think? A man had two sons; he went to the first and said, “Son, go and work in the vineyard today.” 29 He answered, “I will not”; but later he changed his mind and went. 30 The father went to the second and said the same; and he answered, “I go, sir”; but he did not go. 31 Which of the two did the will of his father?’ They said, ‘The first.’ Jesus said to them, ‘Truly I tell you, the tax-collectors and the prostitutes are going into the kingdom of God ahead of you. 32 For John came to you in the way of righteousness and you did not believe him, but the tax-collectors and the prostitutes believed him; and even after you saw it, you did not change your minds and believe him. 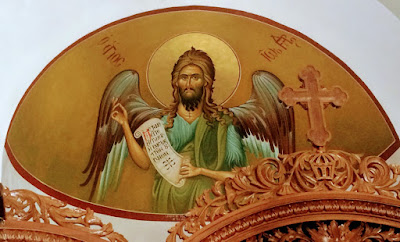 ‘John came to you in the way of righteousness’ (Matthew 21: 32) … Saint John the Baptist in a fresco in a church in Piskopiano, near Iraklion in Crete (Photograph: Patrick Comerford)

Grant, O merciful God,
that your people may have that mind that that was in Christ Jesus,
who emptied himself,
and took the form of a servant,
and in humility became obedient even to death.
For you have exalted him and bestowed on him
a name that is above every name, Jesus Christ, the Lord;
who lives and reigns with you in unity with the Holy Spirit,
one God, for ever and ever.

An icon of Saint John the Baptist in a small church in Crete (Photograph: Patrick Comerford) 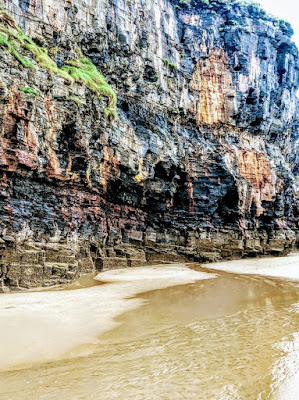 ‘Strike the rock, and water will come out of it, so that the people may drink’ (Exodus 17: 6) water from the rocks at Ballybunion, Co Kerry (Photograph: Patrick Comerford, 2020)