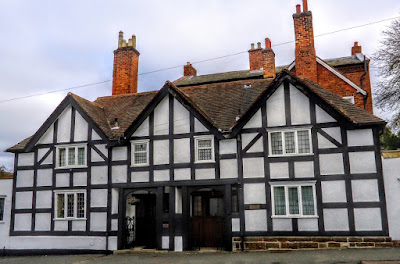 During my visits to Lichfield, I regularly enjoy the stroll along Beacon Street between the Hedgehog and Lichfield Cathedral and the heart of the city. In the light of early morning and in the late evening, with the birdsong in the trees and the lights of the winter sun, there is a semi-rural feeling in the air, enhanced by the rustic look of many of the houses along Beacon Street.

Beacon Street is a truly charming area, with some timber-framed houses and cottages dating back to the 18th century or earlier. Later houses, influenced by the Arts and Crafts Movement, and Tudor-style pubs like the Feathers and the Fountain, add to the character of the area and give it an ambience that is a mixture of both rural setting and late Victorian suburb.

Some years ago, during December snows, when a Facebook friend posted photographs from this area, I told him if I was to live in any street in Lichfield, I would probably want to buy a house on Beacon Street.

One of these charming, timber-framed, Tudor-style houses, Ardmore Cottage, a four-bedroom house, is currently on the market through Knight Frank of Birmingham, who are inviting offers in excess of £495,000.

Ardmore Cottage, Nether Beacon House and Ardmore House once formed one house, but they were later divided into three separate houses, and they have Grade II listing. 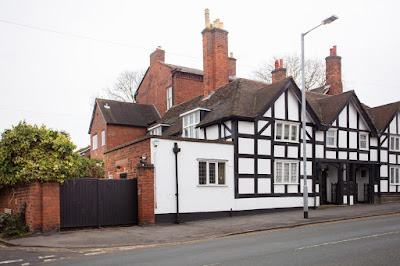 Ardmore Cottage is a pretty, black and white cottage dating from the late 17th century or early 18th century, with a late 18th century addition and later alterations. It is timber-framed with brick infill and brick, tile roofs and brick stacks, and has an abundance of character and charm.

Ardmore Cottage and Nether Beacon House are a pair, built on a double-depth plan with a later range to the rear. Outside, from the Beacon Street frontage, there are two storeys, a symmetrical three-window range, and a 19th century single-storey wing at the end of each house.

There is a hipped roof with three gables, and the timber-frame was applied in the late 19th century to the partly plastered stone plinth.

The entrances to the two houses at the centre have porches recessed behind Tudor arches and Art Nouveau iron gates. The half-glazed doors have leaded glazing and side lights. Inside, the houses retain their beams, fireplaces and original features.

The three-light projecting windows have cornices, but the two central first-floor windows are narrow windows, and the windows on wings date from the 20th century. The left return has and an exposed square framing, three flat-roofed dormers and a tall stack.

Behind, this pair of houses has a three-storey, four-window range, with coped gables, end stacks, and a modillioned brick cornice. The windows have sills, and there are rubbed brick flat arches over the 12-pane sashes, with nine-pane sashes on the second floor.

The right return at Nether Beacon has 20th additions and entrance on the ground floor. The left return has a small, two-storey rear wing with an end stack and return, a 4:12:4-pane, tripartite sash window and is taller than the adjoining front range due to slope of ground.

Ardmore Cottage is entered through a timber-framed storm porch, and the hallway leads to the principal reception rooms, with a staircase rising to the first-floor landing.

The drawing room has a feature fireplace and a large bay window, and an intriguing trap door that leads down to the cellar. The dining room has quarry tiled floor and wooden beams and the kitchen also has feature brick and beams on the walls. There is an ornamental, courtyard-style terrace garden a parking area.

The principal bedroom is en-suite, and there are two further double bedrooms and a family bathroom on the first floor. The fourth bedroom is at the top of the house on the second floor. 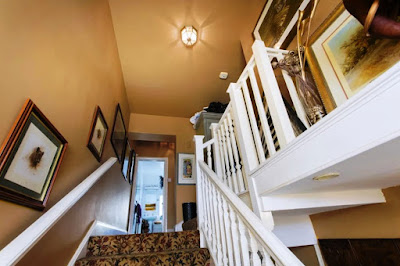 I sometimes wonder how Ardmore House and Ardmore Cottage in Lichfield came to have such distinctively Irish names. Some years ago, in her blog Lichfield Lore, the Lichfield historian Kate Gomez recalls how it is said that a staircase from Fisherwick Hall, the former home of the Marquesses of Donegall, was taken to a house on Beacon Street known as Ardmore.

The paired Nether Beacon House was once a house for boarders from the Friary School in the 1920s, and it has a curious sign at the front door: ‘Beware of the Cats.’ Each time I see it, it reminds me of how Samuel Johnson (1709-1784), the Lichfield lexicographer, and his cat, Hodge, who is remembered in a whimsical passage in James Boswell’s Life of Samuel Johnson (1799).

Boswell recalls that when he observed that Hodge was a fine cat, Johnson said, ‘Why yes, Sir, but I have had cats whom I liked better than this.’ And then, as if perceiving Hodge to be out of countenance, added, ‘but he is a very fine cat, a very fine cat indeed.’

Johnson was known to go out of his way to buy oysters to feed Hodge, even to the point of annoying his servants by pampering his pets. After Hodge’s death, the poet Percival Stockdale wrote ‘An Elegy on the Death of Dr Johnson’s Favourite Cat’:

A bronze statue to Hodge by the sculptor Jon Bickley stands facing Dr Johnson’s house in Gough Square, off Fleet Street, London. It was unveiled in 1997 and shows Hodge sitting on top of Johnson’s Dictionary, alongside some empty oyster shells. The monument is inscribed with the words ‘a very fine cat indeed.’ 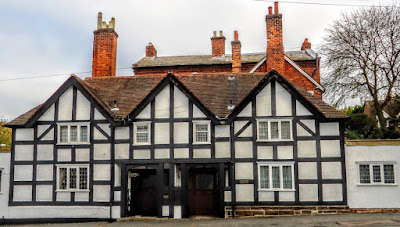