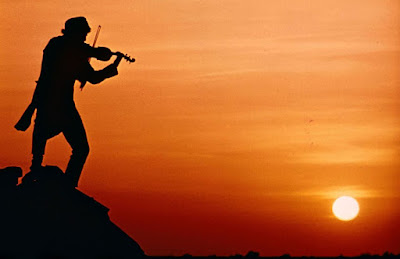 This year marks the fiftieth anniversary of the release of the movie Fiddler on the Roof in 1971, an epic musical comedy-drama film produced and directed by Norman Jewison.

The movie is an adaptation of the 1964 Broadway musical of the same name, with music composed by Jerry Bock, lyrics by Sheldon Harnick, and a screenplay by Joseph Stein based on a series of stories by the writer Sholem Aleichem.

The title of Fiddler on the Roof and the set design for the original Broadway production are based on Marc Chagall’s painting, ‘The Fiddler.’

The film tells the story of the milkman Tevye (played by Chaim Topol), the father of five daughters, his wife Golde (Norma Crane), and their attempts to maintain their Jewish religious and cultural traditions and heritage as outside influences come to bear on family life.

Throughout the film, Tevye talks to God and directly to the audience in monologues in which he ponders tradition, poverty, anti-Semitism, violence, and family divisions.

Tevye struggles with new sexual mores, women’s autonomy, revolution, and interfaith marriage. His three older daughters wish to marry for love – each one’s choice of a husband moves further away from the customs of his faith – and the family also faces a pogrom when a Tsarist edict orders the eviction of the Jews from the shtetl of Anatevka – ‘underfed, overworked Anatevka.’

It is Ukraine in 1905. But Anatevka could as easily be Yakmyan or one of many similar towns near Kovno in Lithuania from which many Jewish families fled to Cork and Dublin at the turn of the 19th and 20th centuries escaping similar pogroms.

Tevye leaves with his family for Kraków, a hint perhaps at how anti-Semitism in central Europe would reach its deepest depravity in Auschwitz, about 65 km west of Kraków.

When Fiddler on the Roof first opened on Broadway in 1964, it was an astonishing event for many Jews, evoking a pride in a public expression of Jewishness that no Jew had experienced in America, and it captivated the imaginations of Jews and non-Jews alike. General Pinochet dismissed Fiddler as a ‘Marxist inspired’ work with ‘disruptive elements harmful to the nation’ when he banned the show in Chile in 1974.

The show has had at least five revivals on Broadway, and MGM announced a planned remake of the movie last year. In her cultural history of the musical, Wonder of Wonders, Alisa Solomon notes that every year at least 200 schools put on the show.

The most Jewish element of Fiddler may be the constant conflict within Judaism between tradition and modernity, although the show’s opening number, ‘Tradition,’ was a late addition to the musical. The tests of Tevye’s ability to straddle the ever-widening gulf between tradition and modernity becomes increasingly difficult. Finally, when his third daughter Chava chooses Fyedka a gentile, he is forced in his torment either to move forward into being a new Jew or to return to the older, traditional way of life.

When the musical was made into a film in 1971, it brought the conflict in Judaism between tradition and change to the attention of a world that had not known about it. But it also became memorable for songs such as ‘Matchmaker, Matchmaker,’ ‘If I Were a Rich Man,’ ‘Miracle of Miracles,’ ‘To Life’ and ‘Sunrise, Sunset,’ and ‘Do You Love Me?’ as well as the ‘Bottle Dance’ at the wedding reception.

However, for my prayers and reflections this Friday evening (16 April 2021), I am returning to the scene in the movie that includes the ‘Sabbath Prayer,’ which reflects a traditional and peaceful Jewish family custom on Friday evenings. This song invokes several traditional blessings associated with Shabbat evenings.

The first verse implores God’s protection and defence of his people. It is also a prayer to not stray from inherited religious traditions and roots.

The second verse is a blessing for daughters to be like the matriarchs of Israel, naming, in particular, Ruth and Esther.

The last verse is an appeal for God’s enduring favour and bestowing of happiness.

May the Lord protect and defend you.
May he always shield you from shame.
May you come to be
in Israel a shining name.

May you be like Ruth and like Esther
May you be deserving of praise.
Strengthen them, Oh Lord,
and keep them from the strangers’ ways.

May God bless you and grant you long lives.
(May the Lord fulfil our Sabbath prayer for you.)
May God make you good mothers and wives
(May he send you husbands who will care for you.)