The Friary in Askeaton was built between 1389 and 1420 (Photograph: Patrick Comerford)

Today is the Fourth Sunday of Easter (Easter IV, Sunday 25 April 2021). This week, I am offering photographs of abbeys and friaries I have found places for prayer and spiritual refreshment.

Earlier in these prayer diaries, I have visited Mount Melleray Abbey, near Cappoquin, Co Waterford, on 28 February and 1 March. This morning my photographs are from the ruins of the Franciscan Friary in Askeaton, Co Limerick.

The friary ruins, on the east bank of the River Deel, are just a short walk the north of Askeaton, and retain magnificent mediaeval cloisters. This site is one of the most complete ruins in Ireland and, as well as the magnificent cloisters with 12 arches on each of the four sides, there are mediaeval carvings, a beautiful east window, a chapter room, refectory and the remains of tombs of key people associated with the history of this part of Munster.

The first date given for its foundation is 1389, when the first friary at Askeaton is said to have been founded by Gerald FitzMaurice FitzGerald, 3rd Earl of Desmond and Lord Justice of Ireland, who died in 1398. The suggestion that the friary was founded before 1400 relies on a grant of indulgence by Pope Boniface IX (1389-1404) to anyone who visited or gave alms to the friary of ‘Inisgebryny’.

Other sources suggest a more likely foundation date of 1420, when the friary became a burial place for the Desmond FitzGeralds. If so, Gerald’s son, James FitzGerald FitzGerald (ca 1380-1462), 6th Earl of Desmond, was the friary’s first main benefactor.

The friary was built between 1389 and 1420, although the present buildings are of a slightly later date. The extensive remains of the friary and its surroundings represent an imposing mediaeval architectural landscape that was probably planned intentionally in the early 15th century.

The friary was founded for the Conventual Franciscans. Saint Francis of Assisivvexpected his friars to follow a vow of poverty and objected to them building houses or churches. However, by the time this impressive friary was built in Askeaton, they had become a powerful and wealthy order.

In 1441, Matthew MacEgan, a member of the prominent family of lawyers, returned from studying in Bologna and became the friary’s lector, or the friar charged with the formation and training of candidates for the priesthood. In 1491, the friars of Askeaton won a case against the friars of Ennis who were accused of hindering their fellow Franciscans in seeking alms.

The friary was reformed in the 1490s and the friars became Observant friars in 1497. In 1513, the friary was formally given to the Observantines by the Franciscan Provincial, Father Patrick Healy.

The church and the north transept, sacristy, cloister arcade and domestic buildings all survive, including the top floors of the east and west ranges. The friary was built with dark grey limestone, and although it was once said the cloisters were built entirely of dark grey marble, they too seem to be fashioned in polished limestone.

The church, apart from the roof, is partly standing, including the nave, chancel and the north transept. The east end of the church, with a lofty window, has some beautiful details in the later English Gothic style.

Among the detailed features are an elaborate sedilia in the south wall, the niches of three altar-tombs of similar design, probably built for the Desmond family, carved windows and stone seats. However, the original bell tower has collapsed, and large masses of the walls lie scattered around.

Among the detailed features are an elaborate sedilia in the south wall, the niches of three altar-tombs of similar design, probably built for the Desmond family, carved windows and stone seats.

One of the most striking features of the friary is its beautiful 15th century cloister arcade. The cloisters are almost entire, and on each side of the enclosed quadrangle there are 12 lofty pointed arches supported by cylindrical columns with richly moulded capitals.

In one corner of the cloisters is a statue of Saint Francis with his stigmata or the signs of the wounds of the crucified Christ. The face of the statue has been worn away by people who were told that kissing the statue would cure toothache.

The refectory was added later, and although it was locked at the weekend, I believe it includes an excellent example of a reader’s desk. The chapter room later became the burial place of the martyrs Bishop Patrick O’Healy and Father Cornelius O’Rourke.

Thanks probably to the patronage of the powerful Earls of Desmond, who lived nearby in the castle in Askeaton, this Franciscan community escaped suppression at the Reformation. The transept contains many interesting tombs, among them the tomb of James FitzJohn FitzGerald, 14th Earl of Desmond and Lord Treasurer of Ireland.

The friary survived until 1579, and some Franciscans continued to live in the Askeaton area. A small group of Franciscans returned to Askeaton in 1627, but the Friary was abandoned in 1648 with the arrival of Cromwell’s forces.

The Franciscans returned to the friary a decade later, and from 1661 to 1714 Guardians of the friary were appointed with regularity. The friary permanently closed in 1740.

An inscription In the cloisters reads ‘Beneath lies The Pilgrim’s body, who died January 17th, 1784,’ leading to stories of the ‘Askeaton Pilgrim’.

Part of the friary was used as a Roman Catholic church until a new church was built in the town in 1851. The Franciscans continued to appoint Guardians of Askeaton Friary until 1872, but these were only nominal appointments. 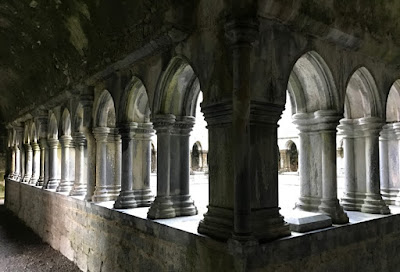 The cloisters in Askeaton Friary are among the most complete and best preserved in Ireland (Photograph: Patrick Comerford)

[Jesus said:] 11 ‘I am the good shepherd. The good shepherd lays down his life for the sheep. 12 The hired hand, who is not the shepherd and does not own the sheep, sees the wolf coming and leaves the sheep and runs away—and the wolf snatches them and scatters them. 13 The hired hand runs away because a hired hand does not care for the sheep. 14 I am the good shepherd. I know my own and my own know me, 15 just as the Father knows me and I know the Father. And I lay down my life for the sheep. 16 I have other sheep that do not belong to this fold. I must bring them also, and they will listen to my voice. So there will be one flock, one shepherd. 17 For this reason the Father loves me, because I lay down my life in order to take it up again. 18 No one takes it from me, but I lay it down of my own accord. I have power to lay it down, and I have power to take it up again. I have received this command from my Father.’ 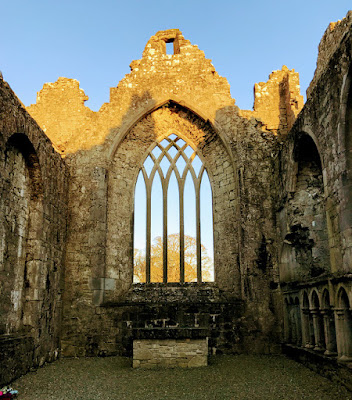 Although the Friary church is roofless, much of it is still standing (Photograph: Patrick Comerford)

The Prayer in the USPG Prayer Diary today (25 April 2021, Easter IV) invites us to pray:

Almighty Lord,
As Jesus laid down His life for us,
May we devote our lives to You.
Let us rejoice in the promise of new life. 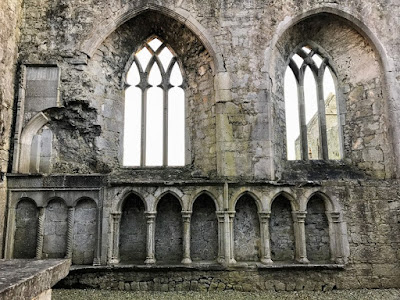 The elaborate sedilia in the south wall in Askeaton (Photograph: Patrick Comerford) 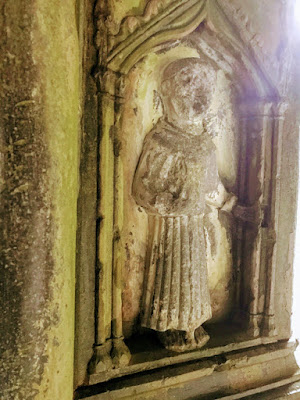 The statue of Saint Francis in a corner of the cloisters in Askeaton (Photograph: Patrick Comerford)