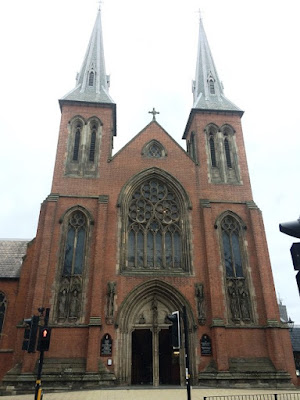 Saint Chad’s Cathedral is Birmingham’s hidden jewel and one of the city’s architectural and artistic gems (Photograph: Patrick Comerford)

Sunday (9 May 2021) was the Sixth Sunday of Easter and yesterday was Ascension Day (13 May 2021). My photographs this week are selected from seven cathedrals throughout England. Earlier in these reflections, during Lent, I used images from Lichfield Cathedral (15 March 2021) and Coventry Cathedral (19 March). But these cathedrals, which I have visited in recent years, have been selected randomly.

The cathedral was designed by AWN Pugin (1812-1852), the pioneer of Gothic revival architecture in England and Ireland. It was built between 1839 and 1841 to serve the rapidly expanding Roman Catholic population in Birmingham, and replaced an earlier Georgian classical chapel built by William Hollins in 1808.

Saint Chad’s Cathedral stands in a public greenspace near Saint Chad’s Queensway, in central Birmingham. It was designed in the north German 13th century style by Pugin, and was consecrated on 21 June 1841 by Bishop Thomas Walsh.

Saint Chad’s is one of Birmingham’s architectural and artistic gems and has a large collection of mediaeval furnishings and carvings collected by Pugin. Three of his sons, Edward, Cuthbert and Peter Paul Pugin, and his grandson, Sebastian Pugin Powell, also worked in Birmingham Cathedral.

Saint Chad’s Cathedral was built partly through the generosity of John Talbot, 16th Earl of Shrewsbury. The foundation stone was laid in October 1839 for what became the first Roman Catholic cathedral built in England since the Reformation.

Saint Chad’s was the first large church that Pugin designed. He lavished great care on the building, and in his letters he describes the architecture, decoration, fittings and furnishings in detail. The Clerk of Works and builder was George Myers.

The site for Saint Chad’s was steeply sloping land and the geographical alignment is unusual, so the liturgical ‘east end’ actually faces approximately north-west. Because of the steep slope, Pugin built a large crypt underneath, to be used as a burial place for family tombs and former cathedral clergy. Those buried here include Bishop Walsh, Pugin’s second wife, Louisa, and four generations of the Hardman family..

The interior, where the nave is almost twice as high as it is wide, has a very high arcade. The wooden ceiling, with curving blue trusses, is ornamented with monograms and floral patterns, inspired by the remnants of mediaeval decoration found on the ceilings of Ely Cathedral (see 16 May 2021) and Peterborough Cathedral (see 10 May 2021). Pugin’s biographer Phoebe Stanton describes the ornate decoration of the ceiling as ‘brilliant’ and so delicate that ‘it resembles fabric stretched over a lattice.’

Pugin designed or procured many of the fittings and furnishings, with the support of Lord Shrewsbury, including the high altar under an elaborate baldachin, with riddel posts, and the choir screen. The Bishop’s Chair, in oak upholstered in green velvet, and decorated with the diocesan coat-of -arms was also designed by Pugin.

The sanctuary windows are the work of William Warrington. Other windows, metalwork, fittings and vestments were provided by John Hardman of Birmingham, to Pugin’s designs or specifications.

The plan consists of an aisled nave, western towers with spires, shallow transepts, short apsidal chancel flanked by the Lady Chapel and sacristies, a north baptistery with steps down to the crypt below. The north-west chapel was added in 1933.

Pugin’s intended spire at the crossing was not built. His short sanctuary was insufficient for the building’s new status and functions, and in 1854 it was extended under the crossing by his son, Edward Welby Pugin, who brought forward Pugin’s roodscreen. EW Pugin also oversaw the addition of the south-west spire in 1856.

The west front is symmetrical, with two thin towers with equally thin broach spires, that to the south-west completed in 1856 (EW Pugin). The north-west tower has a ring of five bells originally cast by Mears of Whitechapel and augmented by three by Blews of Birmingham in 1877, all recast by Taylors of Loughborough in 1940.

The central main entrance has a doorway divided by a stone pier and a carved tympanum with the Virgin Mary and Christ Child and censing angels. Above this, a large six-light window with geometrical tracery and in the gable a spherical triangle window with trefoils. In the towers, the height of the paired windows is accentuated by integral niches, with statues of English saints.

Many of the original furnishings have been lost, but Pugin’s high altar of 1841 survives. Pugin’s altar also survives in the Lady Chapel. In the north transept is Pugin’s elaborate canopied Bath stone monument to Bishop Walsh, made by Myers and a ledger brass to John Bernard Hardman, who died in 1903. Pugin’s font, now in the north aisle, is octagonal and carved with the symbols of the four evangelists.

Saint Chad’s Cathedral was extended in 1932-1933 with the addition of Saint Edward’s Chapel, designed by Pugin’s grandson, Sebastian Pugin Powell. The altar in this chapel is by Gerald Hardman (1933). The chapel windows tell the stories of the relics of Saint Chad and how they were taken from Lichfield Cathedral at the Reformation. Saint Chad’s is the only cathedral in England to have the relics of its patron saint above the altar.

Although the cathedral was first listed in 1952, a major programme of reordering, redesign, repair, relighting and reheating was instigated in 1964 by Archbishop George Dwyer (1908-1987).

The sanctuary was rearranged, remodelled and extended to the chancel crossing. Pugin’s roodscreen was removed and the interior was repainted, to the detriment of the original design. The roodscreen was re-erected in the Anglican parish church of Holy Trinity, Reading. Other artefacts were removed to other churches, including the giant rood crucifix, which was removed to Coleshill.

Pugin’s tiled floors in the sanctuary were replaced with polished marble, and the organ was relocated from the sanctuary arch to the west end, leaving a small choir organ adjoining the sanctuary.

The internal damage was ameliorated in reordering and redecoration carried out from 1992 for Archbishop Maurice Couve de Murville by Duval Brownhill (now Brownhill Hayward Brown). As part of the restoration work, the giant rood crucifix was reinstated in the sanctuary, albeit without the attendant figures of the Virgin Mary and Saint John.

The redecoration and reordering have also reinstated something of the colour and character of Pugin’s interior. The 19th century-style encaustic tile floors in the sanctuary are by H&R Johnson (1992), replacing the 1960s marble. The stone forward altar, pierced with cusped openings, dates from 1992. At the west end of the nave, the organ, built by JW Walker & Sons in 1993, has a painted Gothic case by David Graebe.

One of the partners in Duval Brownhill at the time was Derrick Duval, a Chartered Architect who was the Mayor of Lichfield in 1982. Derrick and Pauline Duval live in Lichfield in the ‘Bogey Hole,’ their lovingly restored Grade 2 listed house in Dam Street, where I have been their guest. 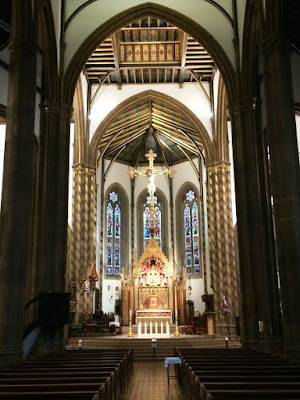 12 ‘This is my commandment, that you love one another as I have loved you. 13 No one has greater love than this, to lay down one’s life for one’s friends. 14 You are my friends if you do what I command you. 15 I do not call you servants any longer, because the servant does not know what the master is doing; but I have called you friends, because I have made known to you everything that I have heard from my Father. 16 You did not choose me but I chose you. And I appointed you to go and bear fruit, fruit that will last, so that the Father will give you whatever you ask him in my name. 17 I am giving you these commands so that you may love one another. 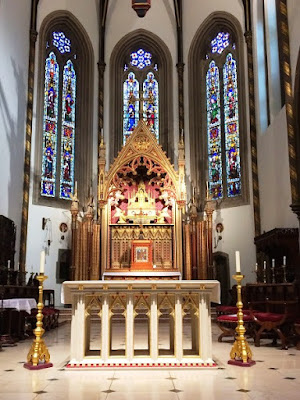 The Prayer in the USPG Prayer Diary today (14 May 2021, Saint Matthias) invites us to pray:

Let us give thanks for the life and work of Saint Matthias. 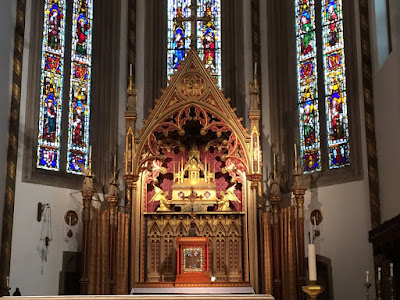 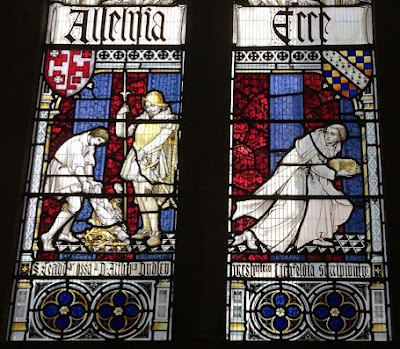