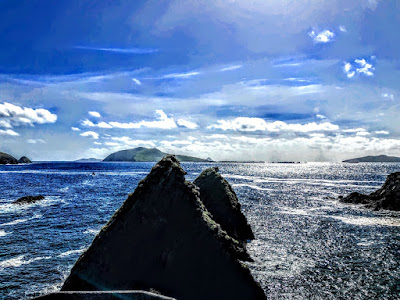 Their books continue to be read, and most Irish people are still familiar with the names of Peig Sayers (1873-1958), not matter how negative their memories are of her book, and Muiris Ó Súilleabháin and Tomás Ó Criomhthain.

But my schoolboy experiences of the Kerry Gaeltacht in Ballinskelligs have left me with a life-long affection for this part of Ireland, and a visit to the Blasket Islands seemed inevitable during last week’s visit to the Dingle Peninsula. 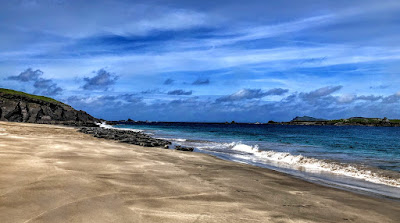 Two of us took a one-day guided tour from Dunquin to the Great Blasket Island last week, when the strong sunshine, blue skies and sparkling sunshine on the seas invited comparisons with island-hoping in the Aegean or the Ionian seas.

The Blasket Islands are an uninhabited group of islands off the Co Kerry coast. There are six principal islands in the archipelago: the Great Blasket Island (An Blascaod Mór), Beginish (Beiginis), Inishnabro (Inis na Bró), Inishvickillane (Inis Mhic Uileáin), Inishtooskert (Inis Tuaisceart) and Tearaght Island (An Tiaracht). At longitude 10° 39.7', Tearaght Island is the westernmost of the Blaskets, and so is the most westerly point in the Republic of Ireland. 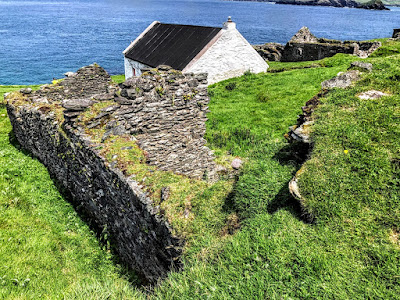 The first home of Peig Sayers is now in ruins (Photograph: Patrick Comerford, 2021)

At its peak, these islands on the edge of Europe had 176 residents in 1916, and all were Irish speakers. They survived mainly through fishing, supplemented by subsistence farming, hunting, fowling and on shore food. There was no shop, no church, no consecrated burials ground and no resident priest or doctor on the island.

An earlier, 19th century school started by Church of Ireland parishioners in Ventry on the mainland provided education in Irish, but last a mere two decades.

There are stories of children who were buried one on top of another in a ceallúnach, kileen or unconsecrated burial ground, without coffins or gravestones, ‘illegitimate’ children being buried face down, supposed suicides that may have been murders that were never investigated, and tiny children being buried in fishbones that served as makeshift coffins.

The islanders were the subject of many anthropological and linguistic studies in the late 19th and early 20th centuries by writers and linguists including Robin Flower, George Derwent Thomson and Kenneth H Jackson.

In this climate, a number of books were written in the early 20th century by islanders, recording island traditions and way of life. These include Peig or Machnamh Seanamhná (An Old Woman’s Reflections) by Peig Sayers (1939), An tOileánach (The Islandman) by Tomás Ó Criomhthain (1929), and Fiche Blian ag Fás (Twenty Years a-Growing) by Muiris Ó Súilleabháin (1933).

Their works in Irish have been translated into English and other languages. I began to feel sorry for Peig, with her arranged marriage, her sorrows, her hardships, the children who died without the joys of childhood, the reproaches for her grief and mourning, and the bodies falling out of coffins.

They were stories that should never have been imposed on young teenagers in the 1960s. It was a new understanding that was complimented by comparisons of Tomás Ó Criomhthain with his Russian contemporary Maxim Gorky, placing him within the corpus of European literature of the day. 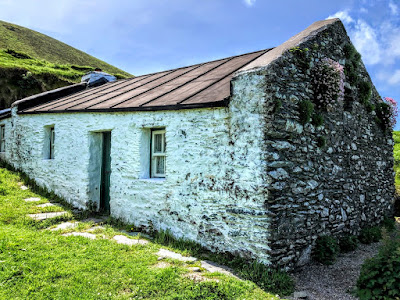 The former home of Tomás Ó Criomhthain … his work has been compared to Maxim Gorky (Photograph: Patrick Comerford, 2021)

On the Great Blasket, the island population had fallen to 22 by 1953, and the small fishing community mostly lived in primitive cottages perched on the relatively sheltered north-east shore. But increasingly extreme weather often left the islands and islanders cut off.

The government decided it could no longer guarantee the safety of the remaining population. But the islanders had been asking to be relocated since 1947. They had been cut off from the mainland for weeks because of bad weather in April 1947, and sent a telegram to the Taoiseach, Éamon de Valera, urgently requesting supplies. The supplies arrived by boat two days later by boat.

The death of Seánín Ó Cearnaigh acted as a catalyst in the islanders’ evacuation. When he became ill, poor weather meant no doctor or priest could reach the island. For many days, the weather stopped his body being taken to the consecrated graveyard across the Blasket Sound in Dunquin. It was a tragic event that led the Islanders ask the government to evacuate them. 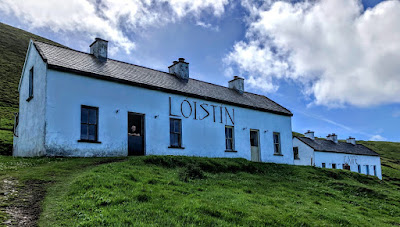 The second home of Peig Sayers is part of the revitalisation of the Great Blasket (Photograph: Patrick Comerford, 2021)

The last remaining residents were evacuated on 17 November 1953 at the request of both the Islanders and the government. The most westerly settlement in Ireland was abandoned.

Later, in the 1980s, the former Taoiseach, Charles Haughey, bought Inishvickillane and behaved like a mediaeval potentate. It is, perhaps, a commentary on Irish social history that the only two people in Ireland still recognisable by their first names alone are associated with the Blaskets: ‘Peig’ and ‘Charlie.’

The Office of Public Works has bought most of the property on the Great Blasket, including the deserted village, in recent decades. Today, more than 95% of the island, including the old village, form a de facto national park.

Peig Sayers’s second home is part of accommodation available to rent and of a café on the island. The home of Tomás Ó Criomthain was restored by the Office of Public Works in 2018. However, the home of Muiris Ó Súilleabháin and Peig Sayers’s first home are both in ruins. 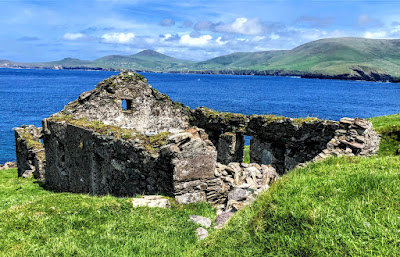 Billy O’Connor and the Great Blasket Island Experience began renovating island cottages in 2014, and the restored cottages were opened for summer rentals. Two caretakers were recruited to manage the accommodation and café, but they lived without electricity and hot water.

The largest living presence on the Great Blasket today is a colony of hundreds of seals, the largest seal colony in Ireland. They were visibly enjoying basking in the summer sunshine on the long stretch of sandy beach in the warm summer sunshine last week.

The journey back to Dunquin took less than 20 minutes. The Blasket Islands may have been bleak for generations, but in the summer sunshine they had been inviting. 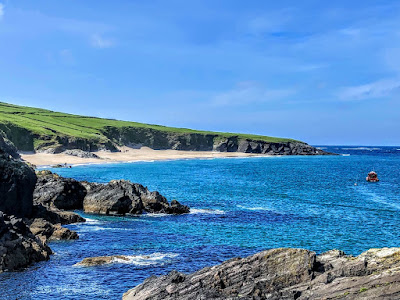