‘Leaving the crowd behind, they took him with them in the boat, just as he was. Other boats were with him’ (Mark 4: 36) … fishing boats in a sheltered harbour at Loughrea, Co Galway (Photograph: Patrick Comerford, 2021) 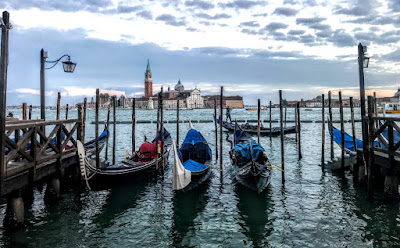 ‘Let us go across to the other side’ (Mark 4: 35) … waiting gondolas near Saint Mark’s Square in Venice (Photograph: Patrick Comerford)

As we work our ways through the storms of life, we have many questions to ask about the purpose or meaning of life. Often, we can feel guilty about putting those questions to God. Yet, should we not be able to put our deepest questions and greatest fears before God?

In the first reading, David seeks to assure Saul about his suitability to do battle with Goliath, and tells him: ‘Let no one’s heart fail.’ David casts off Saul’s heavy armour, disregards Goliath’s disdain, and puts his faith in God.

In an alternative first reading, God responds to Job’s questions with his own challenging questions and reminds Job that God is control of all forces in nature.

In our Psalm (Psalm 9: 9-20), we are reminded that God hears the cry of the poor and promises justice for the oppressed and those in trouble.

In the Gospel reading, the frightened disciples challenge Christ and ask him whether he cares that they are perishing (verse 38). But he offers them words of peace before doing anything to remedy the plight in which they have been caught, and goes on to ask them his own challenging questions: ‘Why are you afraid? Have you still no faith?’ (verses 40)? They, in turn, end up asking their own challenging question about who Christ is for them.

In the first reading, Saul lives in fear and is haunted by his dreams (I Samuel 17: 10-12), while David overcomes his greatest fear by facing it in the person of Goliath (verse 32-49).

David is disdained by the Philistine, who mocks, curses and insults him.

But David answers: ‘I come … in the name of the Lord.’ He believes God will give him victory so that ‘all the earth may know that there is a God in Israel,’ and that God prevails over material advantage. David’s victory marks the beginning of a new era of trust in God.

Psalm 9 is a reminder that the success of evil is only temporary, and in the end, the righteous will endure.

This psalm has a tone of victory over evil and it may have been written to celebrate David’s victory over Goliath.

We are reminded that those who know God (verse 10) will trust in him, for he is faithful to those who seek him. God remembers the pleas of those hurt by the wicked.

God is asked to show his mercy, and to save the petitioner from the ‘gates of death’ (verse 13), so that he may praise God in the Temple (verse 14).

The plight of the disciples in the Gospel reading (Mark 4: 35-41) seems to be the working out of a constant, recurring, vivid dream of the type many of us experience at different stages: the feelings of drowning, floating and falling suddenly, being in a crowd and yet alone, calling out and not being heard, or not being recognised for who we are.

Christ is asleep in the boat when a great gale rises, the waves beat the side of the boat, and it is soon swamped by the waters.

Christ seems oblivious to the calamity that is unfolding around him and to the fear of the disciples. They have to wake him, and by then they fear they are perishing.

Christ wakes, rebukes the wind, calm descends on the sea, and Christ challenges those on the boat: ‘Why are you afraid? Have you still no faith?’ (verse 40).

Instead of being calmed, they are now filled with awe. Do they recognise Christ for who he truly is? They ask one another: ‘Who then is this, that even the wind and the sea obey him?’ (verse 31).

On Father’s Day, people have mixed emotions and memories.

The vast majority have memories of a loving, kind and gentle father, who cared for them and provided for them. Many will remember that when they confronted fears – from bad dreams as a child to fears for the future facing adulthood – their father calmed those fears, acted as a role model, and shared the natural hopes, fears and anxieties for the future.

But for some people, memories of father-figures in childhood can be disturbing, and still the cause of troubled dreams and memories of lost hopes.

Indeed, traumas such as this can make it difficult for some people, as children and as adults, to pray even the simple opening words of the Lord’s Prayer, ‘Our Father …’

And there are people who have no memories of a father, good or bad. People who grew up with bereaved or single mothers, people who were the children of broken families. Too often, the Church has often failed to understand the dilemmas and memories of so many.

But through the storms of life, through the nightmares, fears and memories, despite the failures of the Church, past and present, we must not let bad parenting, or bad experiences of parenting, to ruin our trusting relationship with God our Father.

Like David, we come in the name of the Lord. Despite those who mock and disdain us, despite the death or the failures of father figures, in all the storms of life, throughout all our fears and nightmares, we can trust in God as Father and trust in the soothing words of Christ, ‘Peace! Be still! Be not afraid.’ 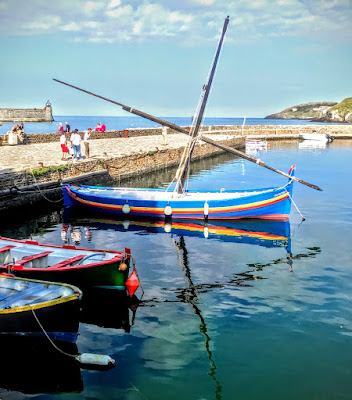 The sails of a boat and the shape of the cross in the harbour at Collioure in the south of France (Photograph: Patrick Comerford) 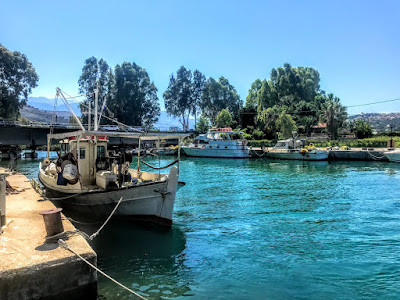 ‘ … they took him with them in the boat, just as he was’ (Mark 4: 36) … boats in the small harbour at Georgioupoli in Crete (Photograph: Patrick Comerford)

O God,
whose beauty is beyond our imagining
and whose power we cannot comprehend:
Give us a glimpse of your glory on earth
but shield us from knowing more than we can bear
until we may look upon you without fear;
through Jesus Christ our Saviour.

A closing prayer on Father’s Day:

Heavenly Father,
you entrusted your Son Jesus,
the child of Mary,
to the care of Joseph, an earthly father.
Bless all fathers
as they care for their families.
Give them strength and wisdom,
tenderness and patience;
support them in the work they have to do
protecting those who look to them,
as we look to you for love and salvation,
through Jesus Christ our rock and defender.
Amen.

The Lord God almighty is our Father:
he loves us and tenderly cares for us.

The Lord Jesus Christ is our Saviour:
he has redeemed us and will defend us to the end.

The Lord, the Holy Spirit is among us:
he will lead us in God’s holy way.

And the blessing of God almighty … 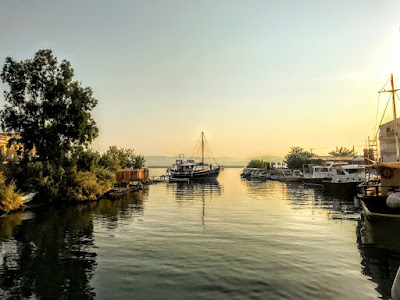 ‘Then the wind ceased, and there was a dead calm’ (Mark 4: 39) … boats in the calm waters at Mesongi on the island of Corfu (Photograph: Patrick Comerford)

Material for Father’s Day from Common Worship © The Archbishops' Council of the Church of England, 2000-2004