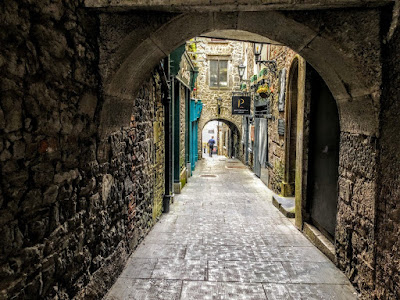 The Langton House in The Butterslip, Kilkenny, was home to at least three generations of the Comerford family (Photograph: Patrick Comerford, 2021)

This summer’s ‘road trip’ arrived in Kilkenny earlier this month, and two of us stayed overnight in the River Court Hotel, overlooking the river, and beneath the walls of Kilkenny Castle.

Kilkenny is one of those places you have to peel me out of it, and I get lost easily in its streets and narrow alleys, wallowing in its rich mediaeval heritage, or browsing in the bookshops.

I can never resist revisiting sites in Kilkenny associated with the Comerford. This month, they included the Butterslip, where the Langton House was home to at least three generations of the Comerford family; the Canal beneath the castle ramparts, once the location of the Comerford and Murray enterprise that tried – and failed – to open up Kilkenny to commercial traffic at the end of the 18th century; and the peculiarly named ‘Hole in the Wall,’ now run by the colourful Dr Michael Conway.

The Langton House beside the Tholsel was built by Nicholas Langton in 1616 in Butterslip, which takes its name from the stalls of butter vendors that flanked this narrow lane on market days. The Butterslip ran underneath two houses, with its arched entry and stone steps along a narrow and dark walkway linking High Street and Saint Kieran’s Street, once known as Low Lane.

The dark and cool climate of the Butterslip was ideal for displaying butter in those days. Today, this is the most picturesque of Kilkenny’s many narrow medieval slips or corridors, lined with small shops, including a bookshop, a gift shop and a well-known sports shop, and the delightful Petronella restaurant.

Leading down into Saint Kieran Street, the limestone steps are imbued with a picturesque quality enhanced by inscribed patterns. This flight of 15 tooled cut-limestone steps date from the 1750s, around the time James Comerford and Anne Langton were married. These steps are arranged in groups of five (east), six (central) and four (west), with limestone flagged landings. 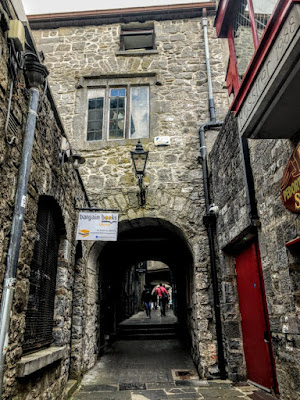 Nicholas Langton, Mayor of Kilkenny, built his townhouse in the Butterslip around 1606 (Photograph: Patrick Comerford, 2021)

Nicholas Langton (1562-1632), who built the house at the Butterslip as his Kilkenny townhouse, was the Sovereign (Mayor) of Kilkenny in 1606. He was sent to London to renegotiate the terms of Kilkenny’s Charter, resulting in the City Charter of 1609 that made Kilkenny a city with a mayor and aldermen. He was MP for Kilkenny (1613-1615) and Mayor of Kilkenny (1613).

When Nicholas died at his country house in Grenan, near Durrow, in 1632, his body was brought by boat from Thomastown to Kilkenny, and he was buried in the ‘great quire’ of Saint John’s Church, Kilkenny. 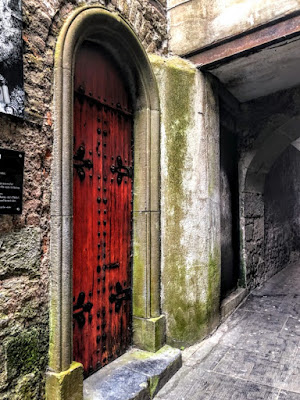 A restored doorway at Petronella’s restaurant in The Butterslip (Photograph: Patrick Comerford, 2021)

James Comerford was the son of William Comerford (ca 1692-post 1765), a direct descendant of the Ballybur branch of the family. Barney Comerford says William and his father, Richard Comerford, lived at Coolgreany, Co Kilkenny; however, Prim and other authorities show William lived in Kilkenny City and he moved into the Langton House in the Butterslip soon after his son James married Anne Langton.

William’s grandson, Michael Comerford, later recalled how William took an oaken chest of title deeds with him to the Butterslip, and on sunny days would take them out and unfold them. Family members believed these were the title deeds to Ballybur Castle. After his death, they were inherited by his elder son James Comerford, but are believed to have been destroyed by James Comerford’s wife, Anne.

William Comerford was still living in the Butterslip some years after the birth of his grandson Michael Comerford in 1765. William’s other children included Edmund Comerford (1722-1788), ancestor of the Comerford family of Newtownbarry (Bunclody), Co Wexford.

James Comerford and Anne Langton were married by the Revd Patrick Molloy, Parish Priest of Saint Mary’s, Kilkenny, on 27 November 1754. After their marriage, James and Anne lived in the Langton House in The Butterslip and continued her father’s business. Until at least 1773, James and Anne Comerford continued to update her father’s pocketbook with details of family births, baptisms, marriages and deaths.

Other members of the extended family who lived with James and Anne Comerford at The Butterslip, included Anne’s half-sister, Mary Fitzpatrick, and her first cousin, Margaret Langton, who died in the house of a ‘dropsical complaint’ on 15 February 1774, aged 52. Margaret’s brother, John Langton, who died of the smallpox at the age of two in 1717, was a godson of Catherine (Comerford) Nagle, sister of Joseph Comerford, Marquis d’Anglure. 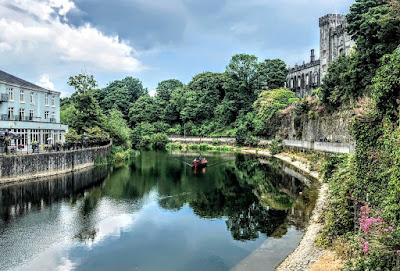 The Canal Walk stretches below the walls of Kilkenny Castle (Photograph: Patrick Comerford, 2021)

James Comerford also formed the partnership of Comerford and Murray with his brother-in-law, Emmanuel Murray (1734-1802), who had married Anne’s sister, Eleanor Langton (1734-1772). Comerford and Murray loaded the first and only boat to navigate the Kilkenny Canal from the tidewater to the city, and the vessel discharged its cargo at New Quay.

The failure, despite many efforts – including those of Comerford and Murray – to build a canal that would make the city accessible from the sea had an enduring impact on Kilkenny. It led to the development of rival marketplaces, notably Bagenalstown, Co Carlow, on the River Barrow, and Clonmel, Co Tipperary, on the River Suir. By the late 1840s, when the railways arrived, most of Kilkenny’s industries were in decline.

On 7 December 1775, James Comerford took the Test Oath along with Walter Butler, de jure 16th Earl of Ormond, the Revd Patrick Molloy of Saint Mary’s, and other leading Roman Catholic citizens at the Tholsel in Kilkenny.

James died shortly after that third portrait was painted in 1808, and his will, as the will of James Cummerford of Knockanure, near Newtownbarry (Bunclody), Co Wexford, went to probate in Ferns Diocesan Court in 1809. 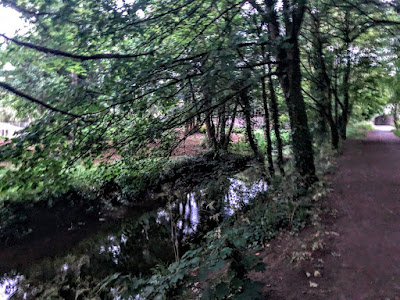 The disused canal in Kilkenny … Comerford and Murray loaded the first and only boat that navigated the Kilkenny Canal (Photograph: Patrick Comerford, 2021)

James and Anne (Langton) Comerford were the parents of 17 children. Their fifth child, Michael Comerford (1764-1851) of King Street, was seven when he saw the removal of the Market Cross in High Street, Kilkenny. He rented the Langton house in the Butterslip from his mother’s brother, Michael Langton of Danville. Prim records the people around Ballybur ‘always looked upon’ him as ‘the lineal representative’ of the Comerfords of Ballybur Castle.

Michael Comerford died unmarried on 20 April 1851 and was buried in Saint Mary’s Churchyard, Kilkenny. His executor was the Kilkenny writer, Michael Banim (1796-1864). Michael Comerford was also an uncle of Jeremiah Scully of Freshford, who inherited the great Irish seal of Charles I from one of the Ballybur title deeds.

When Michael Comerford died in 1851, the Langton House in the Butterslip and the Comerford family portraits by John Comerford passed to his grand-nephew, Father Edmund Madden, who erected his gravestone. 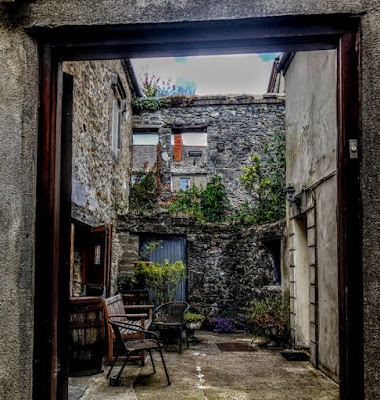 The ‘Hole in the Wall’ stood on this site in Kilkenny … Judith Madden, the proprietor, was mother of Edmund Madden who married Jane Comerford in 1781 (Photograph: Patrick Comerford, 2021)

Jane Comerford, the eldest daughter of James and Anne (Langton) Comerford, was born in 1760, and she married Edmund Madden in Saint Mary’s (Church of Ireland) Church, Kilkenny in 1781. He was the son of Matthew and Judith Madden of High Street, and Judith Madden is said to have been the proprietor of the ‘Hole in the Wall.’

Their son, the Revd Edmund Madden (1818-1865), who was educated at the Sorbonne, Paris, was later a chaplain in Wales to Colonel John Francis Vaughan, father of Cardinal Herbert Vaughan (1832-1903), Archbishop of Westminster. Father Madden inherited the family portraits of James and Anne Comerford, and bought the Langton family interest in the Butterslip, Kilkenny. He died on 28 March 1865 and is buried in Kilkenny.

The Langton house in the Butterslip was sold by the Madden family to the Wall family in 1866. The Langton and Comerford portraits were later inherited by descendants of the Madden family, Monsignor Robert F Hayburn of Saint Mary’s Cathedral, San Francisco, and his brother, Father Edmund Langton Hayburn (1916-2006), of Freemount, California, who presented copies of the Langton and Comerford portraits to the Kilkenny Archaeological Society.

Other descendants of James and Anne Comerford of the Butterslip include Father James Edmund Delany (1843-1901) of Carlow, Parish Priest of Rosenalis, Co Laois; Father Canice Bourke (1890-1969), a Capuchin friar; Elizabeth O’Rourke who married John Buggy, of High Street, who became the first Roman Catholic Mayor of Kilkenny in 1867; and the Manning family who founded Manning’s travel agency in Kilkenny. 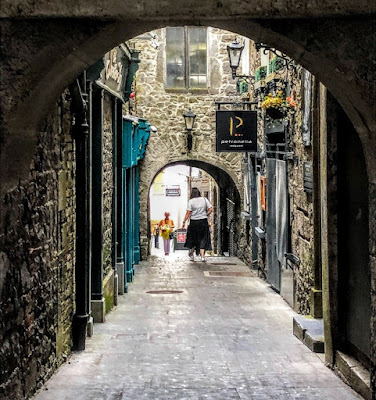 The Butterslip retains much of its charm since it was built 400 years ago (Photograph: Patrick Comerford, 2021)

Oh I loved reading this. I live in Kilkenny and never knew a lot of what you have written. I will be looking at these doors and alley ways in a different light now