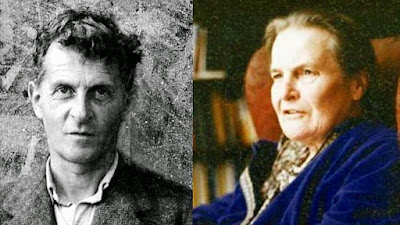 The ‘Decade of Centenaries’ has moved to a new phase this year, with commemorations – among others – of the centenaries of the opening of the Stormont Parliament, the signing of the Anglo-Irish Treaty, the formation of the Irish Free State in 1921, and partition.

This year also marks the centenary of the publication of a short book. The name of the book – Tractatus Logico-Philosophicus – is not punchy, and the centenary edition is unlikely to appear on best-selling lists this year or to find its way into the decorations of shop windows. But this book has changed philosophy for ever.

In his lifetime, Wittgenstein published just this one small, 75-page book, Tractatus Logico-Philosophicus (1921), one article, one book review and a children’s dictionary. His major work, Philosophical Investigations, was not published until two years after his death.

After World War I, and following the publication and translation of his Tractatus, he returned to Cambridge in 1929. There he met Dr Maurice O’Connor ‘Con’ Drury (1907-1976), then an ordinand in Westcott House, the Anglican theological college in Cambridge.

Con Drury was instrumental in arranging the philosopher’s many visits to Ireland in the 1930s and 1940s. During those visits, he stayed at Ross’s Hotel, now the Ashling Hotel in Parkgate Street, Dublin, in Kilpatrick House in Red Cross, Co Wicklow, as a guest of the Kingston family, and at the Drury family cottage in Kinvara, Co Galway.

Wittgenstein enjoyed strolling in the Phoenix Park and the National Botanic Gardens, Glasnevin, where a plaque on steps in the Great Palm House recall that he liked to sit and write there in the late 1940s. He returned to Cambridge and died in 1951. 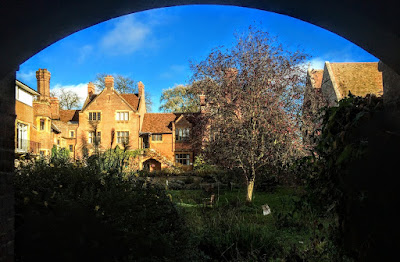 One of his best-known students was Professor Gertrude Elizabeth Margaret Anscombe (1919-2001). She was born in Limerick and baptised in Saint Mary’s Cathedral, and became one of the greatest English philosophers of the 20th century.

She was Ludwig Wittgenstein’s student and one of his literary executors. She became an authority on his work, editing and translating many of his writings, including his Philosophical Investigations.

Elizabeth Anscombe was Professor of Philosophy in the University of Cambridge from 1970 to 1986. When she died 20 years ago, she was buried in a grave in Cambridge beside the plot where Wittgenstein was buried half a century earlier.

Bertrand Russell said Wittgenstein was ‘the most perfect example I have ever known of genius as traditionally conceived.’ Iris Murdoch’s debut novel centred on a line from the Tractatus. His influence reaches almost every discipline in the humanities and social sciences, and he has influenced many current Anglican theologians, including Andrew Davison and Alison Milbank.

Events to mark the centenary of the Tractatus include an international symposium of philosophers, an exhibition in Vienna and new editions in German and English. 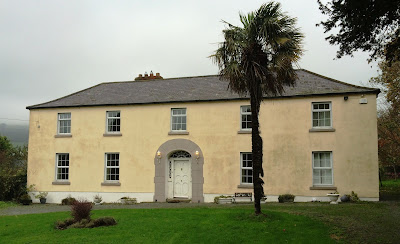 Wittgenstein was a guest of the Kingston family in Kilpatrick House in Red Cross, Co Wicklow (Photograph: Patrick Comerford)

German identity after
150 years of unification

As Angela Merkel steps down in September after 16 years as Chancellor of Germany, there are concerns about the rise of the far-right in Germany and questions about whether Germany can remain the powerhouse of the European Union.

Angela Merkel’s enduring presence on the European stage makes it difficult to remember that Germany is a new state, by European standards, and modern Germany only exists since German unification 150 years ago.

The Unification of Germany formally took place on 18 January 1871 at the Hall of Mirrors in the Palace of Versailles, following Bismarck’s humiliation of France in the Franco-Prussian War. William of Prussia was proclaimed the Emperor of the German Empire, and Berlin became the capital of the new Germany.

German colonies were spread across Africa, Asia, and the Pacific. Between 50% and 70% of the Herero population in in German South-West Africa (Namibia) was exterminated in 1904. It became known as the Herero and Namaqua Genocide, and was an act of racist savagery that seemed unique at the time. But it became the forerunner of the Turkish genocide of Armenians and Pontic Greeks, and then, in the 1930s and 1940s, the Holocaust and the attempted genocide of Jews.

The Brandenburg Gate … a symbol of both German unification and German imperialism (Photograph: Patrick Comerford)

Writing recently in the New Statesman, Richard J Evans, former Regius Professor of History at Cambridge University, observed: ‘It is a curious fact that if you say Germany was not exclusively or even primarily responsible for the outbreak of war in 1914, you are regarded as left wing in Britain and right wing in Germany.’

Wilhelm II, the last Kaiser, was forced off the throne in the November revolution after Germany’s defeat in World War I. He went into exile in the Netherlands where he spent the rest of his life, and the German colonial empire came to an end in 1919.

Members of the Hohenzollern family, the Prussian royal family, openly identified with the Nazis in the 1930s. The public backing of ‘Crown Prince’ Wilhelm for the Nazis in 1932 and 1933 was a significant influence in persuading large numbers of monarchist Germans to vote for Hitler and to support the Third Reich. The ex-Kaiser’s fourth son, August Wilhelm, became a Nazi stormtrooper.

The Hohenzollern family has recently emerged from decades of obscurity and has initiated a number of legal battles to recover what they claim is family property, including castles, estates and art works.

As Professor Evans wrote, ‘A decision in their favour would mean in effect ignoring their ancestors’ collaboration with the Nazis’ and ‘undermine the Federal Republic’s continuing and, so far, largely successful efforts to come to terms with the Nazi past.’

Continuity and identity remain problems for Germany, even 150 years after German unification. 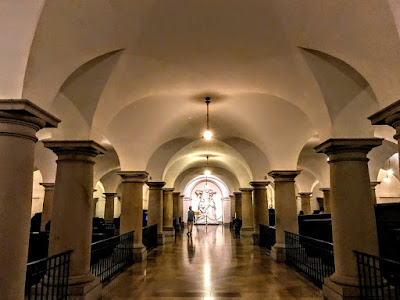 For the past 50 years, I have been a daily reader of The Guardian, which is celebrating its bicentenary this year.

It is 200 years since a four-page weekly first appeared in Manchester in 1821. Since then, the Manchester Guardian has become The Guardian, and has published more than 54,000 editions, and several million pieces of journalism, including news reports, leaders, opinion articles, interviews, reviews, photographs and cartoons.

In its own words, The Guardian is ‘older than Germany, fish’n’chips, the FA Cup and Texas.’

At the beginning of the last century, the campaigning owner-editor, CP Scott, supported Irish Home Rule and opposed the Boer War. In 1914, the Guardian warned that a rush to war would be ‘a crime against Europe.’

Since then, the Guardian has embraced social justice, workers’ rights, redistributive economics, fairness, environmental concern, a measure of pacifism, an inclination for an underdog and a good sense of humour.

Sarah Tisdall leaked documents in 1983 revealing where cruise missiles would be deployed at Greenham Common. The Guardian was taken to court, and then editor Peter Preston, gave back the incriminating evidence – to the dismay of staff and readers. It was not the Guardian’s finest hour: Tisdall was jailed, and Preston later conceded he should have destroyed the documents at the outset. 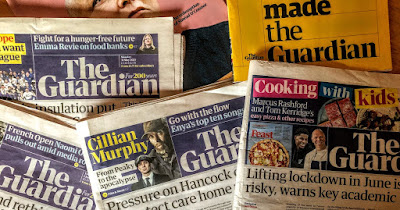 The Guardian was first published in 1821 (Photograph: Patrick Comerford)

Some of its finest hours include taking on Jonathan Aitken in 1995. Aitken vowed to strike the Guardian down with the ‘trusty shield of British fair play’ and ‘the sword of truth.’ But determined journalists uncovered the supporting evidence they needed when they found key receipts in the basement of a bankrupt Swiss hotel.

Aitken had been receiving pay-offs from the Saudis, and when he was jailed for perjury for 18 months, the Guardian front-page headline proclaimed: ‘He lied and lied and lied.’ Niall Hamilton brought a £10 million libel case, but the evidence exposed him as liar and a cheat and brought an end to the ‘cash for questions’ case.

Chris McGreal witnessed genocide in Rwanda. Maggie O’Kane and Ed Vulliamy revealed the horrors of the siege of Sarajevo and the death camps in Bosnia.

Ewan McAskill told the story of Edward Snowden, the NSA files and in the biggest intelligence leak, uncovering the scale of western surveillance, and the Guardian played a pivotal role in the 2010 Wikileaks and in revealing the ‘Panama Papers.’

The newspaper that gave us memorable ‘typos’ such as a man named Brian who died of a ‘brian tumour’ also gave us the best-ever April Fools’ Day joke with a seven-page supplement on the attractions of San Serriffe on 1 April 1977.

Local newspapers are folding up and dying in England. The Lichfield Mercury, where I was a freelance contributor 50 years ago, began in 1815 but finally came to an end last year. The Guardian is constantly adapting to new circumstances and markets; hopefully, it has another 200 years of campaigning journalism ahead of it. 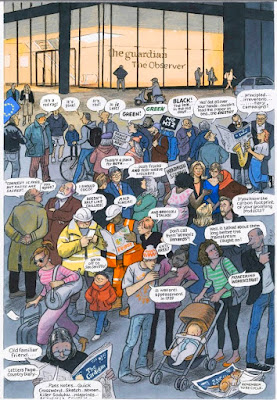 This feature was first published in the July 2021 edition of the ‘Church Review’ (Dublin and Glendalough.