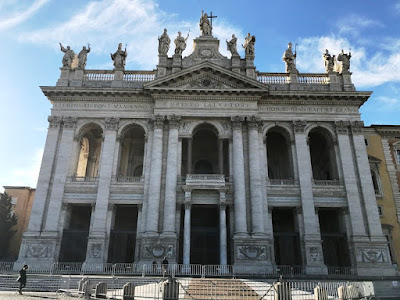 The Basilica of Saint John Lateran is the cathedral church of Rome, and it is here that the Pope has his cathedra as Bishop of Rome (Photograph: Patrick Comerford)

This week my photographs are from seven churches in Rome, and my photographs this morning (5 July 2021) are of the Basilica of San Giovanni in Laterano, or Saint John Lateran. 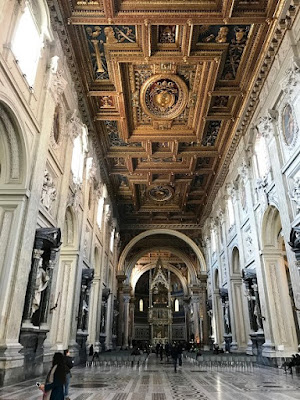 Unfortunately, in the 1880s, Pope Leo XIII decided to enlarge the apse. A proposal to raise and move back its walls was rejected for cost reasons and the apse was pulled down. The new apse was decorated with a mosaic that depicts the same scene as the old one, but without the style and technique of Torriti’s work.

The palace still belongs to the Holy See and houses a museum of the Papal State.

The President of the French Republic is ex officio the ‘first and only honorary canon’ of the basilica, a title held by the heads of state of France since King Henry IV. In a similar way, the King of Spain is ex officio an honorary canon of Saint Mary Major. 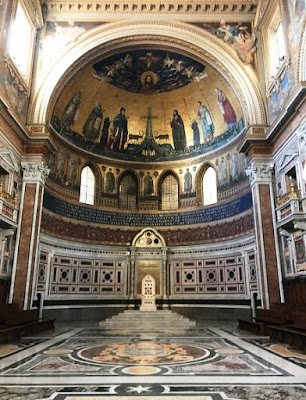 The cathedra in the chancel of Saint John Lateran is the Pope’s throne as Bishop of Rome (Photograph: Patrick Comerford)

18 While he was saying these things to them, suddenly a leader of the synagogue came in and knelt before him, saying, ‘My daughter has just died; but come and lay your hand on her, and she will live.’ 19 And Jesus got up and followed him, with his disciples. 20 Then suddenly a woman who had been suffering from haemorrhages for twelve years came up behind him and touched the fringe of his cloak, 21 for she said to herself, ‘If I only touch his cloak, I will be made well.’ 22 Jesus turned, and seeing her he said, ‘Take heart, daughter; your faith has made you well.’ And instantly the woman was made well. 23When Jesus came to the leader’s house and saw the flute-players and the crowd making a commotion, 24 he said, ‘Go away; for the girl is not dead but sleeping.’ And they laughed at him. 25 But when the crowd had been put outside, he went in and took her by the hand, and the girl got up. 26 And the report of this spread throughout that district. 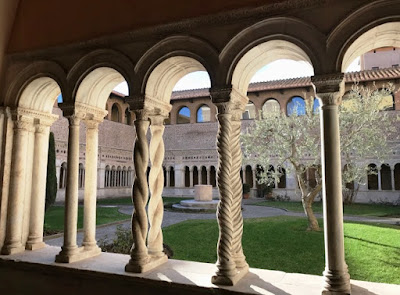 The Prayer in the USPG Prayer Diary today (5 July 2021) invites us to pray:

Let us give thanks for universal healthcare. May we recognise the work of those who established the National Health Service, and the contributions of those who administer healthcare in the UK today. We pray for nurses, doctors and everyone else who has been working for the NHS during the Covid-19 pandemic. 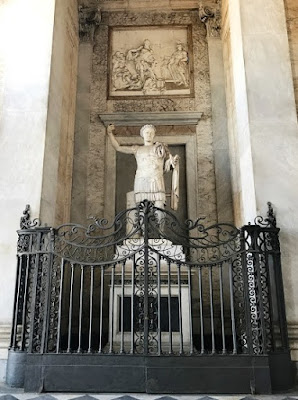 An ancient statue of the Emperor Constantine stands in the portico (Photograph: Patrick Comerford)