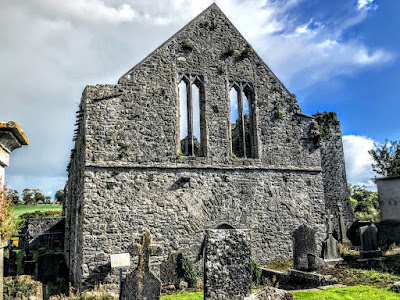 The ruins of the Franciscan Friary beside Saint Mary’s Church, on the Main Street, Buttevant (Photograph: Patrick Comerford)

Today is the Feast of Saint Luke the Evangelist (18 October). The annual clergy conference for priests of the Diocese of Limerick and Killaloe and the Diocese of Tuam, Killala and Achonry begins later today in Adare, Co Limerick.

This year’s conference comes just two weeks before the two dioceses are merged into one following the retirement of both Bishop Kenneth Kearon and Bishop Patrick Rooke.

My theme for these few weeks is churches in the Franciscan (and Capuchin) tradition. My photographs this morning (18 October 2021) are of the ruins of the Franciscan Friary in Buttevant, Co Cork. 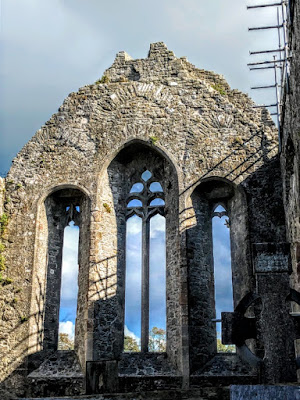 The ruins of the Franciscan Friary are in the centre of Buttevant, beside Saint Mary’s Roman Catholic Church on the Main Street. The friary was also dedicated to Saint Thomas à Becket of Canterbury and housed a thriving community from the mid-13th to mid-16th century. It still possesses some of the earliest examples of Franciscan architecture in Ireland.

The first friary of the Observant Franciscans in Ireland was founded at Youghal, Co Cork, by Maurice FitzGerald in 1224. The friary in Buttevant was founded from Youghal and was the only Franciscan house in North Cork.

The Annals of the Four Masters record it was founded and endowed in 1251 by David Óg de Barry. The townland of Lagfrancis was assigned as the glebe for its mensa.

At first, the Franciscan friary had a rectangular church. A transept was added later, with a triumphal arch that faced south, towards the Barry family’s castle. The Bell Tower was added in the final phase and was placed equidistant from both gables of the friary.

The Franciscans were mendicant friars who lived by preaching and on charity. But their patrons in Buttevant, the Barry family, financed several major redevelopments of the friary. Over the centuries, these expansions showed the growing wealth and power of the Barrys.

By 1324, Buttevant friary consisted of a community of Irish and Anglo-Norman friars and was important enough to maintain its own stadium or house of studies.

However, the community was divided by tensions between the Anglo-Norman and Irish friars. A Papal commission investigated a decision to transfer a Gaelic friar from Buttevant to one of the Gaelic friaries, and the Friary in the 1320s, at the time when the friary in Buttevant had been transferred to a new jurisdiction, separating it from other Irish friaries and linking it to Anglo-Norman friaries.

The Cloyne diocesan records from the 1400s show that the law courts in Buttevant operated at the door of the friary church. In mediaeval Buttevant, the friary porch was the place to make legal agreements, renew or grant leases on Lady Day and Michaelmas, to swear fealty, to do homage and to marriages. These records also record the same legal functions at the front door of the parish church of Saint Bridget, the site later of Saint John’s Church, the Church of Ireland parish church in Buttevant.

When of the monastic houses were dissolved during the Tudor reformation in the 1540s, the Franciscan friary in Buttevant included the friary church, the conventual buildings, a garden, a cemetery, and a watermill.

Evidence shows the Franciscan friars continued to live at the friary in late Elizabethan and Jacobean Buttevant. Reports in 1615 and 1629 show the large friary church was still roofed and held many of the tombs of the local nobility, and the friary buildings ‘were spacious and numerous.’

The friars returned to Buttevant at the Restoration. Two friars continued to live in Buttevant in the 18th century, and the friary was still being used by friars in 1731, according to a report presented to the House of Lords.

By 1800, only one old friar was left in Buttevant, and he died soon afterwards. The great Bell Tower, which had been silent for centuries but continued to dominate the friary ruins, collapsed in 1814, and greatly damaged an already fragile, crumbling building. By 1820, the Franciscan presence in Buttevant had come to end after almost 600 years.

Canon Cornelius Buckley, who built Saint Mary’s Church in the 1830s, removed the rubble inside the friary nave and chancel , and collected the architectural remnants that were inserted in the north wall, as a ‘sort of mediaeval museum for the curious,’ as the antiquarian, Richard Brash described it.

A large quantity of human remains and bones was collected at this stage. For some years, they were of ghoulish interest to visitors, but were later reburied in the crypt under the friary.

Samuel Lewis noted in his Topographical Dictionary in 1837, that the tomb of the founder, David de Barry, ‘is supposed to be in the centre of the chancel, but is marked only by some broken stones which appear to have formed an enclosure.’ Other families buried in the nave and chancel included the Barrys, Fitzgeralds, Lombards, and others.

The remains of the friary today include a church with a piscina and a number of elaborate carvings. The church and transept are complete, many stones belonging to the cloister arcade are stored in the upper vault under the choir, while there are good carved stones in the lower vault, and some windows in the church have been rebuilt. 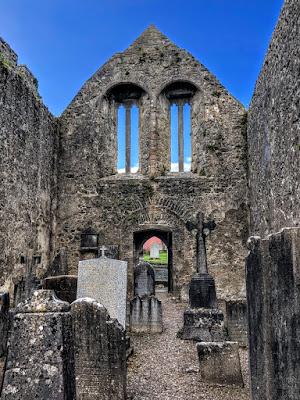 Inside the church of the Franciscan friary in Buttevant (Photograph: Patrick Comerford)

10 After this the Lord appointed seventy others and sent them on ahead of him in pairs to every town and place where he himself intended to go. 2 He said to them, ‘The harvest is plentiful, but the labourers are few; therefore ask the Lord of the harvest to send out labourers into his harvest. 3 Go on your way. See, I am sending you out like lambs into the midst of wolves. 4 Carry no purse, no bag, no sandals; and greet no one on the road. 5 Whatever house you enter, first say, “Peace to this house!” 6 And if anyone is there who shares in peace, your peace will rest on that person; but if not, it will return to you. 7 Remain in the same house, eating and drinking whatever they provide, for the labourer deserves to be paid. Do not move about from house to house. 8 Whenever you enter a town and its people welcome you, eat what is set before you; 9 cure the sick who are there, and say to them, “The kingdom of God has come near to you”.’ 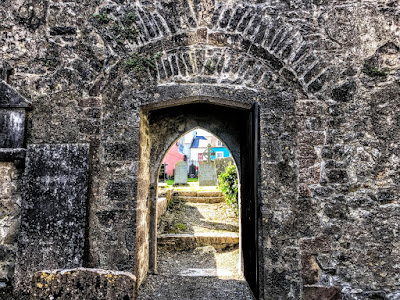 The Franciscan friars continued to live in Buttevant until the early 19th century (Photograph: Patrick Comerford)

The Prayer in the USPG Prayer Diary today (18 October 2021, Saint Luke the Evangelist) invites us to pray:

Let us give thanks for the life and works of Saint Luke. May we be a healing presence in the world. 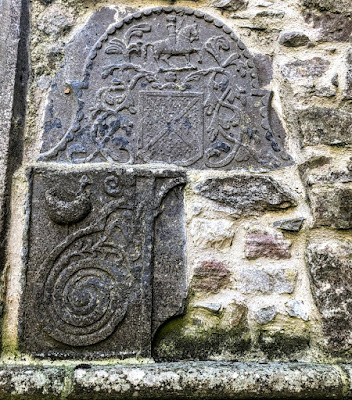 Architectural remains and portions of graves were inserted in the north wall of the friary church in the 1830s (Photograph: Patrick Comerford, 2020 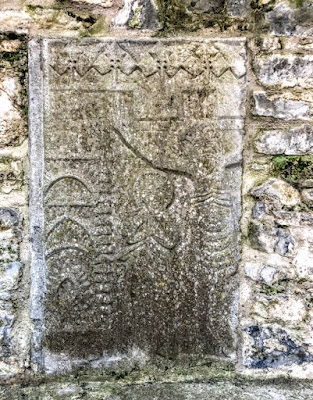 Portion of a carved mediaeval crucifixion, inserted in a wall in the south transept (Photograph: Patrick Comerford)