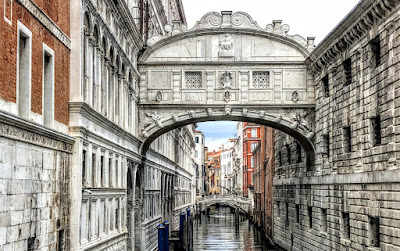 Byron gave the name ‘the Bridge of Sighs’ to the bridge linking the Doge’s Palace and the prisons in Venice (Photograph: Patrick Comerford, 2021)

I have long associated the poet Lord Byron with Greece and the Greek of War of Independence. But I was reminded in Venice this week that Byron lived in Venice for three years, from 1816 to 1819, after he was forced to leave England due to his debts and following too many sex scandals.

Byron is one of the legends of the city, known for his palace near the Grand Canal, his swimming feats and his notorious love-life while he lived in the Mocenigo Palace, between the Rialto Bridge and Saint Mark’s Square, for three years. I was staying this within walking distance of this palace, in the Hotel San Cassiano in the Ca’ Favretto, in the Santa Croce district, on the Grand Canal.

Byron lived in the Mocenigo Palace with 14 servants, two monkeys, a fox and two mastiff dogs, and there he composed the first songs of Don Juan, although it does not mention the city.

In the Querini Benzon Palace on the Grand Canal, Byron also met his last love, the 18-year-old Teresa Gamba Guiccioli, wife of the rich and much older 60-year-old Alessandro Guiccioli from Ravenna.

Those three years in Venice, which was then a city in sad decline, proved to be a turning point in Byron’s career. Venice became the subject of a number of his poems, including Childe Harold’s Pilgrimage and the Ode to Venice, and its history provided the theme for two major dramas.

Byron also composed his social satire, Beppo, regarded by many as one of the wittiest and most amusing works ever written on Venetian life. In Venice, Byron explored the potential of the ottava rima verse formthat would come to embody his poetic voice and all its vices.

While crossing the bridge linking the Doge’s Palace and the prisons, Byron invented the name ‘the Bridge of Sighs’ – a reference to the imagined sighs of condemned prisoners as they caught a glimpse of Venice for the last time – and so made this one of the best-known bridges in the world.

For a time, he lived briefly on the island of San Lazzaro degli Armeni with the small community of Armenian monks. There he learned Armenian and was involved in the publication of an English-Armenian dictionary.

Byron often swam too to the island of Lido to visit the old Jewish Cemetery, the perfect place for his romantic spirit, or to ride his horses.

Gregory Dowling’s guidebook, In Venice and in the Veneto with Lord Byron, visits places in Venice and on the islands of the lagoon that Byron visited and wrote about. He also invites readers to visit a number of places in Veneto associated with Byron, including visiting Verona, Vicenza, Padua, Este, Arquà Petrarca and his villa at La Mira, where he spent the summer months. 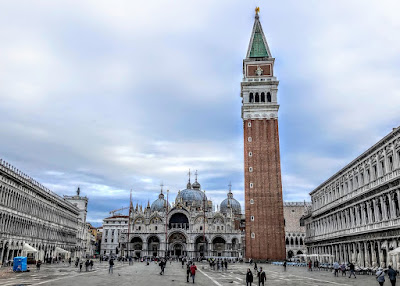