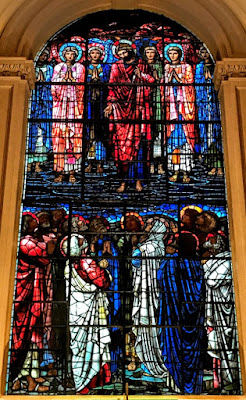 The Ascension (1885) … one of three windows by Sir Edward Burne-Jones in the chancel of Saint Philip’s Cathedral, Birmingham (Photograph: Patrick Comerford)

Sunday (9 May 2021) was the Sixth Sunday of Easter and today is Ascension Day (13 May 2021). My photographs this week are selected from seven cathedrals throughout England. Earlier in these reflections, during Lent, I used images from Lichfield Cathedral (15 March 2021) and Coventry Cathedral (19 March). But these cathedrals, which I have visited in recent years, have been selected randomly.

This morning, my photographs are from Saint Philip’s Cathedral, Birmingham, including the Ascension window, one of three Pre-Raphaelite chancel windows by Sir Edward Burne-Jones.

I have been in Saint Philip’s Cathedral, Birmingham, for meetings of USPG volunteers from the Midlands dioceses. This has only been a diocesan cathedral since 1905, with the formation of a new Diocese of Birmingham, but it dates back to 1715, when it was built and consecrated as a parish church.

Saint Philip’s, built in the Baroque style by the architect Thomas Archer (1668-1743), is a Grade I listed building. It is the third smallest cathedral in England after Derby and Chelmsford.

Saint Philip’s Church was planned when the nearby mediaeval parish church of Saint Martin in the Bull Ring became too small for the growing population of Birmingham. The site was donated by Robert Philips in 1710. The site at Colmore Row is one of the highest points in Birmingham, and is said to be at the same level as the cross on Saint Paul’s Cathedral, London (see 9 May 2021).

Work on building a new parish church began in 1709, and the church was consecrated on 4 October 1715, when it was dedicated Saint Philip the Apostle in a tribute to the benefactor Robert Philips. This was probably Archer’s first church. and his Baroque design was influenced by the churches of Bernini and Borromini in Italy.

The hall-style, rectangular interior has aisles separated from the nave by fluted pillars in classical form, with Tuscan capitals supporting an arcade surmounted by a heavily projecting cornice, and there are wooden galleries are stretched between the pillars. The tower was complete by 1725, and the urns on the parapet were added in 1756.

The original shallow east apse was extended in 1884-1888 into a much larger chancel, by JA Chatwin, who also refaced the exterior of the building.

The Pre-Raphaelite artist Sir Edward Burne-Jones (1833-1898), who was born nearby in Bennett’s Hill and was baptised in the church in 1834, donated several windows, made by the William Morris studios in Birmingham. His three windows in the chancel depict the Ascension (1885), the Nativity (1887) and the Crucifixion (1887); his window at the west end depicts the Last Judgment (1897).

Saint Philip’s continued to serve as a parish church from 1715 until 1905. Birmingham was given city status in 1889, and the Birmingham-born statesman Joseph Chamberlain and Bishop Charles Gore of Worcester worked hard for a separate Diocese of Birmingham.

During World War II, the cathedral was bombed and gutted on 7 November 1940. However, its most significant treasures, including the Burne-Jones windows, had been removed by Birmingham Civic Society. They were replaced, undamaged, when the cathedral was restored in 1948.

Thomas Stirling Lee’s statue of Bishop Charles Gore, vested in convocation robes with his right hand raised in blessing, stands in front of the West entrance. Other monument in the cathedral grounds include a memorial to the 21 victims of the Birmingham pub bombings in 1974, unveiled in 1995.

The Very Revd Matt Thompson has been the Dean of Birmingham since 2017.

Tomorrow, in this prayer diary, I am visiting Saint Chad’s Roman Catholic Cathedral in Birmingham. 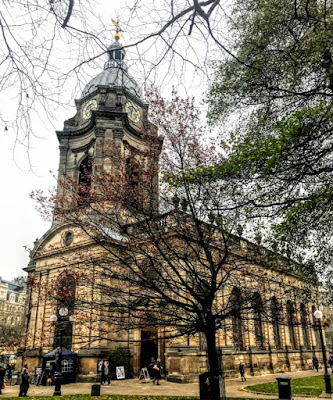 Saint Philip’s Cathedral, Birmingham … built in 1715 and a cathedral since 1905 (Photograph: Patrick Comerford) 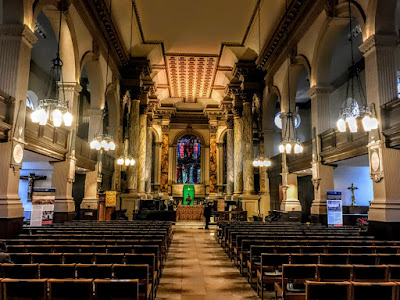 The Prayer in the USPG Prayer Diary today (13 May 2021, Ascension Day) invites us to pray:

Holy Father, as you raised your Son to heaven, may we embrace the knowledge that He will remain with us evermore. 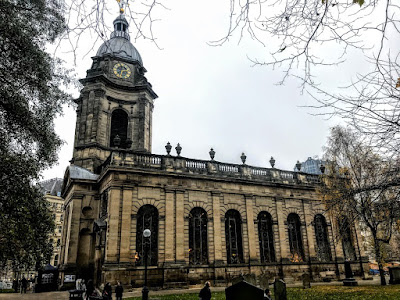