The Church of the Annunciation,
a church in Wexford with a rich
collection of artistic details 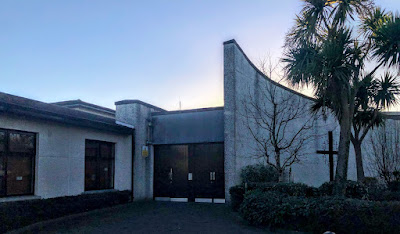 The Church of the Annunciation, a innovative modern church serving the new suburbs of Wexford (Photograph: Patrick Comerford, 2022)

As I was leaving Wexford late last week, I decided to stop in Clonard and visit the Church of the Annunciation, a modern church I had never visited before but that was recommended to me because of its architectural design and its stained-glass.

The Clonard area was still meadowlands a mile or so west of Wexford town in the 1950s. Residential and industrial development began in the 1960s, as Wexford town began to expand. German-owned factories opened in the area, and local enterprises moved to the Wexford Industrial Estate at Whitemill in Clonard. 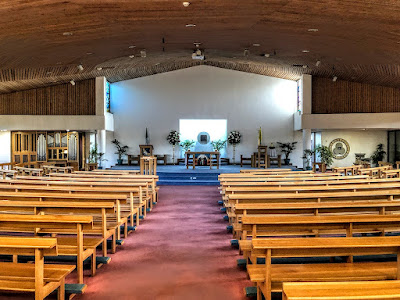 Inside the Church of the Annunciation in C,lonard, designed by Maurice Fitzgerald of Fitzgerald, Reddy and Associates (Photograph: Patrick Comerford, 2022)

The Catholic clergy in Wexford town realised the pace of change and proposed acquiring land in Clonard for a future church, initially as a relief church for the Church of the Assumption, Bride Street. The proposed site at Townparks bordered the GAA Park, Clonard Road, Clonard Avenue and Liam Mellows Park.

Kennedy Park School was built on the site, but it was not close enough to a growing population, and the church bought land once owned by the Mercy Convent that had been sold to Wexford Corporation. A decision was made to build a church and a community centre at the same time.

The new church was designed by Albert Lennon and Ceall Ó Dúnlaing. Lennon was a Wexford-born architect who had set up his own practice in 1956. The builders were John Ferguson & Sons. The foundation stone for the Church of the Annunciation and the Community Centre was laid by Bishop Donal Herlihy of Ferns on 23 December 1973. 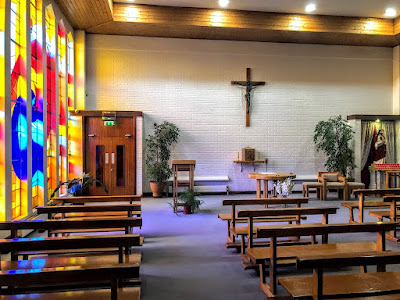 The first church on the site was designed by Albert Lennon and Ceall Ó Dúnlaing and now serves as the Day Chapel (Photograph: Patrick Comerford, 2022)

The architects described the church as small and intimate for daily use, with seating for about 220 people. This would extend to 770 people when the hall was included. In a novel concept, sliding doors would link the church with the hall. The innovative spire or fleche of fibreglass on steel latticed trusses was designed in similar proportions to the spires of the ‘Twin Churches’ in Wexford town. It looked striking, but structural problems developed later due to its new design.

The church furniture was inspired by Celtic designs. The richly decorated interior included a limestone-fronted altar that is no longer there but with a motif representing the multiplication of the loaves and fishes, inspired by the North Cross at Castledermot, Co Kildare. The tabernacle door depicting the Crucifixion is based on early Irish open bronze work. The cross on the ambo was repeated on the church door panels, but these too are gone.

Two small windows on the north wall by the main door representing the Crucifixion and the Resurrection were designed by Stanley and Alan Tomlin of Irish Stained Glass Ltd. William Earley worked with the Tomlins in designing and producing the large, beautiful stained-glass window on the east wall representing the Annunciation. 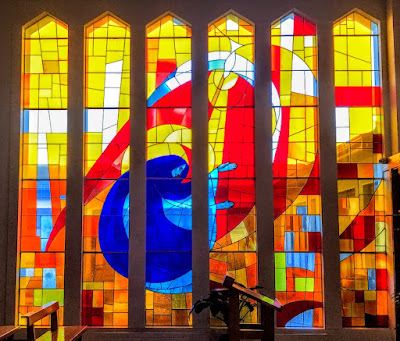 In later changes, the two smaller windows and an adjacent row of six small windows were removed and stored, but the Annunciation window remains in the original church, now known as the Day Chapel. Over the years it has had minor repairs and restoration by Wexford Glass Company Ltd and the stained-glass artist Vera Whelan.

The church was dedicated by Bishop Herlihy on 8 December 1974, and Clonard became a separate parish in 1976, with the Very Revd Patrick Cummins as the first parish priest.

Fundraising were so enthusiastic in Wexford that a debt of over £100,000 in 1976 was reduced to £30,000 three years later. When the fundraising committee handed over to the finance committee, the amount raised was only £2,000 short of the target.

The church was consecrated on 25 March 1979, when Bishop Herlihy led prayers that the church might remain a gateway of peace, that it might never be without God’s blessing and that all those approaching might receive comfort. 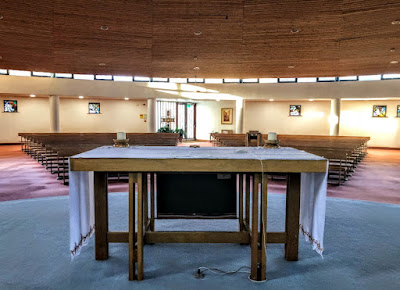 The fan-shaped seating in the church brings the congregation as close as possible to the celebrant (Photograph: Patrick Comerford, 2022)

An unusual ecumenical event took place on 12 April 1980 when the Lutheran Church held a confirmation service. Christine Sassmannshausen and her sister Mareike were members of the Clonard folk group, and Bishop Herlihy welcomed Pastor Kurt Pruessmann of the Lutheran Church in Ireland to the Church of the Annunciation.

Meanwhile, the needs for change were becoming apparent. The community centre and church were used to the full, but linking the church and hall created difficulties: sounds from the hall were often inappropriate during funerals or special prayers in the adjoining church, it was often necessary to adjust the timing of events, and discos in the community were discontinued due to ‘disturbance.’ By the early 1980s, the parishioners were anxious to have a new, larger church that was separate from the community centre.

Father Lory Kehoe, then parish priest, invited parishioners to a meeting in 1992 to discuss building a new parish church. Father Denis Lennon was appointed parish priest in 1993, with Father Colm Murphy as the new curate.

Maurice Fitzgerald of Fitzgerald, Reddy and Associates was the architect and Richard Browne and Sons of Wexford were the main contractors.

The church was designed to seat 650 people, with the furthest pew only 10 rows from the sanctuary and about 15 metres from the altar (Photograph: Patrick Comerford, 2022)

The priest and committee members travelled widely to see other churches and presented the architects with a list of 30 major considerations. The church was to be fan-shaped, to seat 650 people and to face the direction of Clonard Road rather than towards the GAA park.

The foundation stone of the new church was laid by Bishop Brendan Comiskey on 21 December 1996. The commemorative plaque reads, ‘The Church’s one foundation is Jesus Christ Our Lord.’

Maurice Fitzgerald envisaged an interlinking church and social centre that could operate independently. The church was to seat 650 persons in a fan-shaped seating arrangement, bringing the congregation as close as possible to the celebrant. The project was cost more than £2.5 million.

The plan was that ‘internally the atmosphere is to be intimate and prayerful, externally the building is to convey an image of refuge and peace.’ The original church would become a Day Chapel with seating for 60 to 80 people. 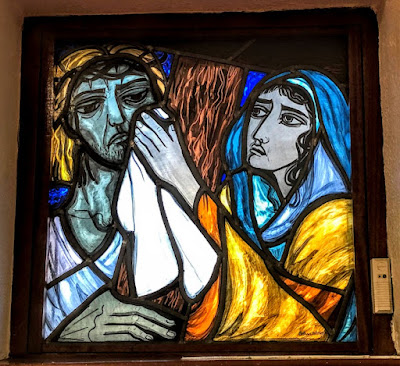 the Stations of the Cross by Gillian Deeny emphasise the role of women in the Passion story (Photograph: Patrick Comerford, 2022)

A significant feature is the way the furthest pew is only 10 rows from the sanctuary area and about 15 metres from the altar. As the architect wrote, ‘This arrangement reinforces the intimacy of the relationship between the congregation and the celebrant. All have clear uninterrupted sight of the sanctuary area.’

The church was blessed and opened on 11 October 1998. Hilary Murphy wrote in the Wexford People that ‘it was a time for savouring the satisfaction of a job well done and for expressing admiration and gratitude for the Trojan input by so many and by certain individuals in particular.’

The architect selected American white oak as material for the Altar and the seating. They were made by Irish Contract Seating of Carrick-on-Shannon, Co Leitrim. 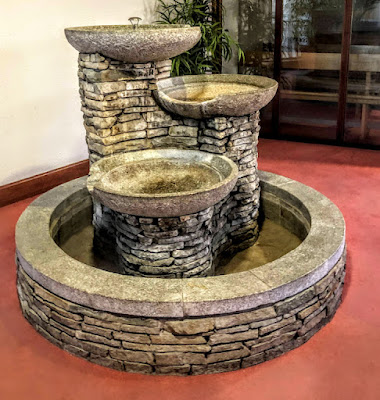 The design of the baptismal font emphasises that Baptism is in the name of the Trinity (Photograph: Patrick Comerford, 2022)

In an unusual arrangement, the Stations of the Cross are set in the curved outer wall of the church in 14 windows designed by Gillian Deeny of Wicklow. In her windows, she emphasises the role of women in the Passion story.

Her windows were made in association with Abbey Glass, where she worked with the cut-out shapes of coloured glass, the pigment being a mixture of lead oxide, ground glass and colour. Each window is signed by the artist.

The stonework setting for the tabernacle is a cantilevered piece of Co Dublin granite. The baptismal font is of carved Carlow limestone. The design concept of the three bowls emphasises that Baptism is in the name of the Trinity. They are the work of sculptor Paddy Roe, who carved the small holy water fonts in the porches.

A relief work on the wall at the Candle Shrine in the Baptistry area represents the Virgin Mary and the Children of the World. 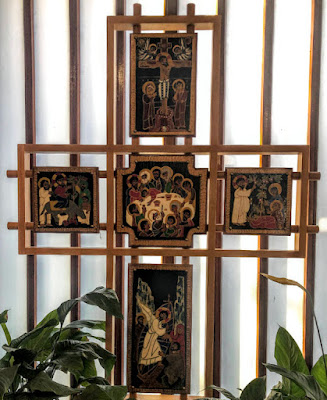 The church has two interesting decorative crosses. One is a copy of the Reliquary Cross of Pope Pascal I, depicting the infancy cycle with baptism. The original dates from the ninth century and is in the Vatican Museum. The other is a Pascal Cross inspired by Armenian and Georgian icons.

The tabernacle door is the work of metalwork artist Jane Murtagh of Cratloe, Co Clare. Her door represents the bread from heaven, and is set into a granite surround that suggests the circular shape of the host. Her inspirations included plants in the Bible, Brother Brian Murphy’s Bible garden in Glenstal Abbey, and 20th century studies on the origins of the manna in the Exodus story.

She read how two professors at the Hebrew University of Jerusalem discovered that the manna was produced not by the tamarisk tree itself, but by two species of cochineal insect that fed on its leaves. ‘The viscous substance falls at night and appears in the morning as balls the size of a hazel nut. It has to be collected early before the ants get to it. The manna was eaten raw or cooked, sometimes mixed with meal.’

The Wexford potter Paul Maloney made and donated the ceramic altar vessels: a chalice, cruet set, ciborium and finger bowl. 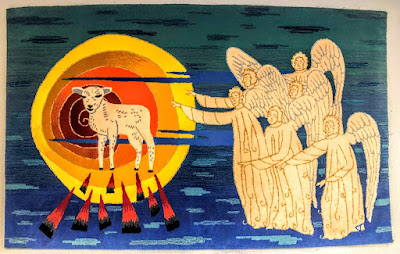 Terry Dunne’s hanging in the east porch represents the blessed who are invited to the wedding feast of the Lamb (Photograph: Patrick Comerford, 2022)

The hangings at the altar and the ambo were designed and woven by Terry Dunne in 1998. His other designs hang in the east and west porches: the hanging in the east porch represents the blessed who are invited to the wedding feast of the Lamb; that in the west porch depicts the Angels and little birds flying in mid-air gathering for the supper of the Lord.

The pipe organ is by the Wexford organ builder Paul Neiland. Some years earlier, when the Mercy Convent at Summerhill closed, the chapel organ was given to Clonard parish. The organ dated from 1870 and only some of the instrument was suitable for reuse. But a set of pipes was incorporated into the new organ along with other pipes that are now part of the pedal division.

The organ was built at the Neiland workshops, now at Newtown, Killinick. A considerable quantity of stock pipework was used and the finished instrument has a total of 1,093 pipes ranging in size from half an inch to 16 ft. The organ was installed at a recital on 8 June 2000, when Paul Neiland spoke about the organ and organ building and Eithne Scallan, the local historian who has written the history of the parish, introduced the music. 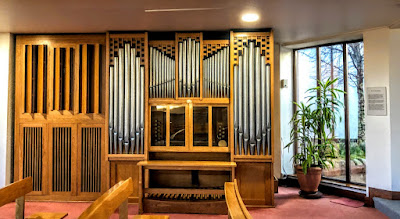 By 2006, the church could boast a second pipe organ. The small, single-manual Telford organ dating from 1843 came from the Presentation Convent in Enniscorthy, and is used in the Day Chapel.

When the church was being rebuilt, it became necessary to remove the original spire and it was agreed to have a real bell in a modern belfry or bell tower. An old bell procured from Hayward Mills in England came from Saint John’s Church (Church of England) in Great Marsden, Lancashire

The Very Revd Barry Larkin was appointed the Administrator of Clonard Parish last year (2021). Monsignor Denis Lennon is the parish curate. Sunday Masses are at 9 am, 10 am and 11.30 am. 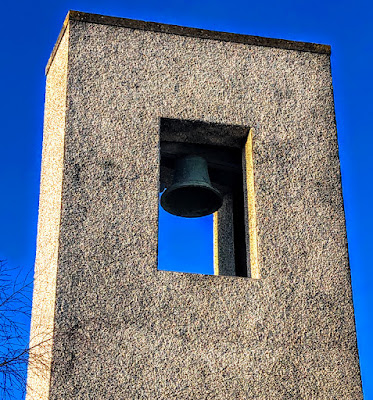