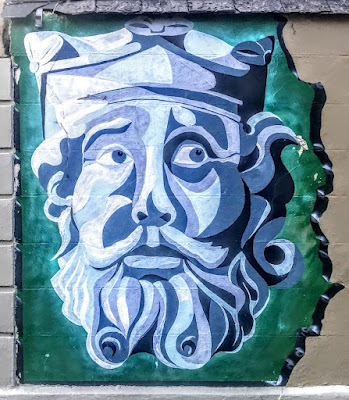 ‘Do not, O Lord, withhold your mercy from me; let your steadfast love and your faithfulness keep me safe for ever’ (Psalm 40: 11) … street art in Cashel, Co Tipperary (Photograph: Patrick Comerford)

Despite the extended Saint Patrick’s Day celebrations at the end of the week, I had a minor stroke (totally unconnected) and I have ended up in hospital in Milton Keynes since Friday night. But I am continuing with my Prayer Diary and each day. Today is the Third Sunday in Lent (Lent III, 20 March 2022), and before this day begins, I am taking some time early this morning for prayer, reflection and reading.

Psalm 40 is ascribed to King David and is described by the Jerusalem Bible as a ‘song of praise and prayer for help.’ In a slightly different numbering system in the Greek Septuagint and the Latin Vulgate, this known as Psalm 39.

The first part of the Psalm (verses 1-11) is one in the series of psalms of thanksgiving of an individual. Verses 13-18, possibly set originally as an independent psalm, is virtually identical to Psalm 70. This part belongs more in the group of psalms of lament.

Psalm 40 may be divides into three sections:

The U2 song 40, also known as 40 (How Long), is the tenth and final track on their 1983 album, War. The song is noted for its live performances. The guitarist the Edge and the bassist Adam Clayton trade instruments during the performances, and as it was commonly played to end their concerts, the band would leave the stage one-by-one as the audience continued to sing the refrain ‘How long to sing this song?’

The song was completed within the last few hours of the recording sessions for War. After working all night in Dublin on the album in Windmill Lane Studios, the band found themselves at 6 a.m. feeling that they were still one song short. Another band, Minor Detail, were due to start their recording session at 8 a.m. and had arrived early, and Adam Clayton had already gone home.

In a moment of inspiration, the remaining members -- Bono, the Edge, and Larry Mullen – decided to revive an abandoned song that they had been unable to translate into a ‘coherent song.’ Producer Steve Lillywhite quickly did a multi-track edit of the song, removing any parts that seemed disconnected from the main musical idea. With Clayton absent, the Edge switched between guitar and bass guitar.

In search of lyrical inspiration, Bono opened the Bible and found Psalm 40, on which he based his words. As soon as his vocals were recorded and the song mixed, the band immediately left the studio, completing the sessions for War. 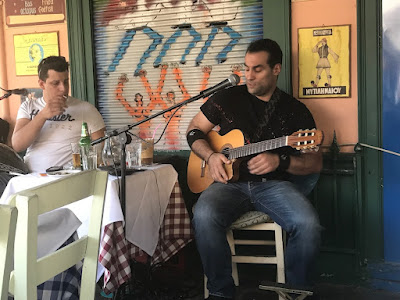 ‘He put a new song in my mouth, a song of praise to our God’ (Psalm 40: 3) … Greek singers outside a café in the Plaka in Athens (Photograph: Patrick Comerford)

1 I waited patiently for the Lord;
he inclined to me and heard my cry.
2 He drew me up from the desolate pit,
out of the miry bog,
and set my feet upon a rock,
making my steps secure.
3 He put a new song in my mouth,
a song of praise to our God.
Many will see and fear,
and put their trust in the Lord.

4 Happy are those who make
the Lord their trust,
who do not turn to the proud,
to those who go astray after false gods.
5 You have multiplied, O Lord my God,
your wondrous deeds and your thoughts towards us;
none can compare with you.
Were I to proclaim and tell of them,
they would be more than can be counted.

6 Sacrifice and offering you do not desire,
but you have given me an open ear.
Burnt-offering and sin-offering
you have not required.
7 Then I said, ‘Here I am;
in the scroll of the book it is written of me.
8 I delight to do your will, O my God;
your law is within my heart.’

11 Do not, O Lord, withhold
your mercy from me;
let your steadfast love and your faithfulness
keep me safe for ever.
12 For evils have encompassed me
without number;
my iniquities have overtaken me,
until I cannot see;
they are more than the hairs of my head,
and my heart fails me.

13 Be pleased, O Lord, to deliver me;
O Lord, make haste to help me.
14 Let all those be put to shame and confusion
who seek to snatch away my life;
let those be turned back and brought to dishonour
who desire my hurt.
15 Let those be appalled because of their shame
who say to me, ‘Aha, Aha!’

16 But may all who seek you
rejoice and be glad in you;
may those who love your salvation
say continually, ‘Great is the Lord!’
17 As for me, I am poor and needy,
but the Lord takes thought for me.
You are my help and my deliverer;
do not delay, O my God.

The USPG Prayer Diary has a particular focus this week on ‘Lingering Legacies’ and remembering the victims of slavery and the transatlantic slave trade. This theme is introduced this morning by Monique Castle, Adviser to the Anglican Youth Fellowship in the Diocese of Jamaica and the Cayman Islands. The Prayer in the USPG Prayer Diary this morning (20 March 2022, Lent III) invites us to pray:

Welcoming God,
May we offer sanctuary to those in need.
Let no one be a stranger
In the house of the Lord. 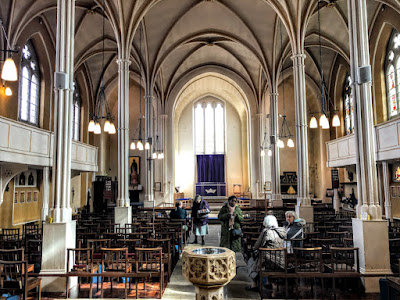 ‘Let no one be a stranger in the house of the Lord’ (the USPG Prayer Diary this morning) … inside the parish church of Saint Mary and Saint Giles in Stony Stratford, Milton Keynes (Photograph: Patrick Comerford, 2022)

Lovely start to the day with these words and prayer. Plus the interesting story of U2 recording 40.