Sunset on the beach on the Meath Gold Coast 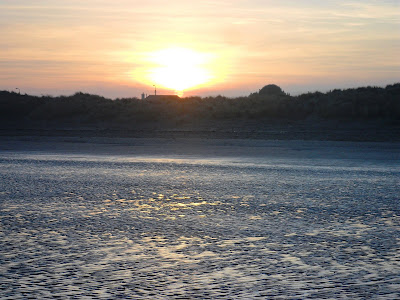 Sunset behind the beach at Bettystown on the Meath Gold Coast (Photograph: Patrick Comerford, 2011)

Harold Wilson famously said in 1964: “A week is a long time in politics.”

I had planned to head out for a walk on the beach this afternoon – planning a walk on the long beach that stretches from Mornington, on the southern edges of Drogheda, south to Laytown.

But then at 1 p.m., RTÉ announced that Brian Cowen was about to call a press conference at 2 to announce his resignation as leader of the Fianna Fail party.

All week, I have been recalling the rushes of adrenalin I felt when I was working during exciting times on the newsroom floor in The Irish Times so many years ago.

1 o’clock, 2 o’clock ... there goes my walk on the beach, I thought. I’m taking part in a live television panel discussion on Sunday afternoon, and I’m away at a conference then for a full week. It looked as though there was going to be no walk on the beach for a long time, a long, long time.

RTÉ’s coverage of this political crisis has been wonderful all week. It seems the nation knew, thanks to RTÉ, of one cabinet resignation after another before John Gormley knew about them. Then, this afternoon, the Taoiseach said, at about 2.15 p.m., that he had phoned John Gormley about 15 minutes earlier to let him know about the decision he had taken ... once again, I and anyone listening to the news at 1 p.m. knew an hour before John Gormley what the Taoiseach had in his mind.

Fascinating, perhaps, yet difficult to swallow. The word GUBU quickly comes to mind, for in the words ascribed to Charlie Haughey, the situation is “:grotesque, unbelievable, bizarre and unprecedented.”

In fact, the word GUBU is an acronym coined by Conor Cruise O’Brien in the Observer after Haughey described a strange and embarrassing series of events in 1982 as “a bizarre happening, an unprecedented situation, a grotesque situation, an almost unbelievable mischance.”

But even more fascinating, and even more difficult to swallow, is the expectation that we should all accept that the man who knows now that he is not competent at the head of his own political party is competent as head of the government. Did he not tell us all at the beginning of the week that it would be unacceptable to separate the two offices?

I could have stayed in front of the television all afternoon, RTÉ has been so good in its political reporting and coverage.

But I had to go, for my own health and my own sense of wellbeing.

These have been beautiful crisp mornings, with clear blue skies, a crisp first covering the ground. In the evenings, we have been blessed with a bright full moon. But as two of us headed off, a thick fog was descending on the motorway north of the airport, and I wondered whether I had left it too late in the dayfor that much-needed beach walk.

The fog almost totally enveloped the beehives at the turn-off at Gormanston, and was still heavy as we turned off at Julianstown for Laytown. And then it started to lift. 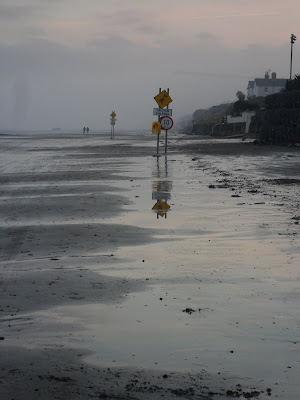 The beach at Bettystown ... the tide was out this afternoon (Photograph: Patrick Comerford, 2011)

By the time we reached Bettystown, the tide was out far and there was clear view out to the east and over the Irish Sea. The beach was busy with walkers, a handful of dogs, and one horse and rider.

This part of Co Meath, with good reason, calls itself the “Meath God Coast” – a local woman found the Tara Brooch in a box buried in the sand here in 1850. But the name is deserved just for the lengthy stretch of open beach – although I still find it difficult to understand how Meath County Council allows people to drive their cars onto the beach and to use it as a car park or for giving driving lessons, even though it actively discourages kite-fliers, and one pilot has been fined for parking his helicopter on the beach.

We headed north walking towards Mornington, with the golf club on our left (west) and to sea to our right (east). And then – just as I turned around to head back, the sun was setting over the village, like a round orange ball hovering over the rooftops and casting a glow across the sand dunes and the beach. 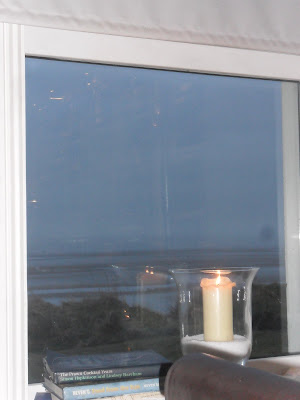 A window seat in Relish with a view out onto the beach at Bettystown ( Patrick Comerfird, 2011)

But there was another delight in Relish, a beautiful restaurant in Bayview, a terrace of houses facing the beach just a few steps from the Neptune Hotel.

This bistro-style restaurant and café is an amazing place is a village of this size. But it is yet another reason why this area can truly call itself the Gold Coast.

I had a Roasted Mediterranean Vegetable Basket on a bed of Moroccan couscous with melted goat’s cheese, and a sweet chili and pesto dressing; my friend had grilled cod with an herb crust on a pesto mash. With a glass of white wine, a bowl of large olives dressed in olive oil, garlic and herbs, one Americano and a double espresso and a tip in all came in at €40.

The food was wonderful, the attention at the table was attentive. But it was all crowned by being given a table at the window looking out at the sea as darkness fell.

Outside, we took one last look at the beach … it almost 6 p.m., the sand was being covered in crisp, crunchy crystals of .frost, the tide was still out – so far out that we could not hear the gentle roll of the waves.

Once again, I was feeling good about myself. The symptoms of sarcoidosis have been unsettling for the past week, with a difficult cough and bothering discomfort in my joints, especially my knees. But these beach walks always make me feel positive and realise that while I have sarcoidosis, sarcoidosis will never have me. And I feel equipped, refreshed and recharged for the week ahead.
Posted by Patrick Comerford at 21:47