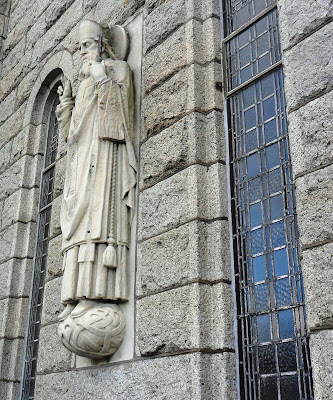 A statue of Saint Patrick on the wall of Skerries Parish Church (Photograph: Patrick Comerford, 2011)

May I speak to you in the name + of the Father, and of the Son, and of the Holy Spirit, Amen.

Today, hundreds of Saint Patrick’s Day celebrations are taking place worldwide. If you head into the city centre later today, you will need to have your wits about you as you collide into drunks and revellers.

Writing recently in the Word magazine, Professor Vincent Twomey of Maynooth said that “it is time to reclaim Saint Patrick’s Day as a church festival.” He questioned the need for “mindless, alcohol-fuelled revelry,” and argued that “it is time to bring the piety and the fun together.”

In the Anglicanism module in Year II this year, we have examined both the myths and facts surrounding Saint Patrick, and we have looked at the Patrician mission and the pre-Patrician roots of Irish Christianity. And we heard one of those myths, about Saint Patrick and his goat, when we visited Skerries for our Ash Wednesday retreat last week.

But we cling onto Saint Patrick’s Day as if everything we think, say and do in regard to this day is part of sacred, national myth. People who say things like Vincent Twomey said are dismissed as myth-busters at best and killjoys at worst.

1, Saint Patrick’s Day does not date back to Saint Patrick’s days. It is also a feast day in the calendar of the Western Church since the mid-17th century, thanks to Luke Wadding (1588-1657), a Franciscan theologian from Waterford who founded Saint Isidore’s, the Irish College in Rome. He claimed Saint Patrick had died on 17 March, and encouraged his students to remember the saint on that date each year. But the commemoration was almost unknown, even in Ireland.

5, At first the Church of Ireland Gazette strongly opposed Saint Patrick’s Day becoming a public national holiday … because it would lead to too much drinking.

7, The Gaelic League, formed by Douglas Hyde, a rector’s son, to promote the use of the Irish language, also campaigned to have pubs shut on this day. One TD said “the drowning of the shamrock” was “a direct insult to the saint.” A senator claimed Saint Patrick would drown anyone drowning the shamrock. Countess Markievicz wanted hotels to stay dry too, declaring: “I do not see why rich people should not be kept off their drink as well as poor.”

9, From 1927 to 1961, the Dog Show at the Royal Dublin Society was the only place to legally drink alcohol on Saint Patrick’s Day. Huge crowds turned up. One TD complained it was a grand occasion “except for all the dogs.”

10, For decades, all broadcast advertising was also banned on this day, which was filled with traditional music, religious services and speeches such as Eamon de Valera’s address in 1943 when he spoke of “happy maidens dancing at the crossroads.”

So, before we go off to celebrate Saint Patrick’s Day, and to enjoy ourselves, let us take to heart Vincent Twomey’s recent comments in the Word as a timely reminder that the central truths of the faith Saint Patrick brought to this island – the life, passion, death and Resurrection of Christ – are more important than any commemoration – secular, civic or religious – of the saint’s life.

Canon Patrick Comerford is Director of Spiritual Formation, the Church of Ireland Theological Institute, and a canon of Christ Church Cathedral Dublin. This reflection was shared at the Community Eucharist on Saint Patrick’s Day, 17 March 2011.

Posted by Patrick Comerford at 08:45