With the Saints in Lent (40): Saint Macartan of Clogher, 24 March 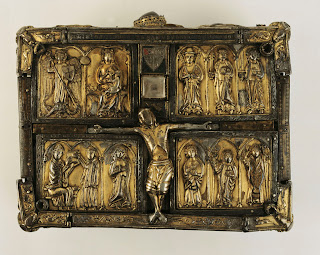 The Domhnach Airgid, associated with Saint Macartan of Clogher, is now in the National Museum of Ireland, Dublin

Saint Macartan, belongs to a very early generation of saints in Ireland and is claimed as both the first Bishop of Clogher and an uncle of Saint Bridget. He is known as Saint Patrick’s “Strong Man” for his dedication and faithfulness, and he is commemorated in the calendar of the Church of Ireland today [24 March].

Today is Palm Sunday, and the commemorations of saints are traditionally postponed during Holy Week and transferred to appropriate days after Lent and Easter. However, I hope that with a new Latin American Pope that the the martyrdom of Oscar Romero shall be remembered in many churches throughout the world today.

Meanwhile, I think it is worth retelling the story of Saint Macartan on his day.

Saint Macartan grew up in the northern part of Ireland. Before his conversion to Christianity, the future saint was known by the name Aidus. He was the son of Caerthen, and so continued to be known after his conversion as Macartan.

He was spoken of as Saint Patrick’s “champion” or “strong man.” It is said that when Saint Patrick worn out by his work, Saint Macartan supported his faltering steps over rough roads, marshes and rivers.

He was the “Staff of Patrick” in Saint Patrick’s declining years. One story tells of an occasion when he had carried Saint Patrick across a river. Saint Macartan was exhausted and wished for a nearby church where he could settle down in peace.

Saint Patrick was full of sympathy for his faithful companion and agreed that he should establish a monastery in Clogher and end his days there.

A monastery was established near the ancient royal fort of Rathmore on the outskirts of the town and so, it is said, the Diocese of Clogher had its beginnings in the year 454. The original Diocese of Clogher was, practically speaking, coextensive with the territory of the Prince of Oriel in present-day Co Tyrone and Co Fermanagh. It is said that Saint Brigid, Saint Macartan’s niece, was present at the founding of the see.

To commemorate the occasion, the story continues, Saint Patrick gave Saint Macartan his staff or crozier and a number of precious relics in a shrine known traditionally as the Domhnach Airgid, or the Silver Church of Silver Shrine.

The Cloch Oir or Golden Stone, from which this diocese takes its name, is said to have been a sacred ceremonial stone for the Druids. It was given to Macartan by an old pagan noble, who had harassed Macartan in every possible way until the saint’s patient love won the local ruler to the Christian faith.

Saint Macartan died in the year 506 and his feast day is celebrated on 24 March. In 2006, 1500th anniversary of his death was commemorated throughout the diocese.

The Domhnach Airgid, now in the National Museum of Ireland, Dublin, contains fragments of 39 sheets of the Gospels, written in the distinctively Irish lettering of the eighth or ninth century. On the cover of the Domhnach Airgid is one of the earliest surviving metalwork images of Saint Patrick.

Around 1350, the Abbot of Clones, John O Carbry, paid for a substantial remodelling of the Domhnach Airgid. The figure of St. Patrick is thought to be at the lower right of the cover. In the lower left, Saint Patrick may be handing the Domhnach Airgid to Saint Macartan.

The two cathedrals in the Church of Ireland Diocese of Clogher are named after him, albeit with different spellings: Saint Macartan’s, Clogher, and Saint Macartin’s, Enniskillen.

When Saint Macartan died, tradition says, he was succeeded as bishop by Tighernach of Clones, a son of the nobleman who gave him the Golden Stone of Clogher.
In 1135, Gilla Crist O Morgair (Christianus) moved the Diocese of Clogher to Louth, and this union lasted until 1218. Indeed, the Annals of Ulster continued to refer to the Bishop of Clogher as the Bishop of Airghialla (Oriel) into the second half of the 14th century.

In 1241, King Henry III ordered the union of the dioceses of Clogher and Armagh because of the poverty of the two dioceses. However, this union did not take place, although, under Bishop David O Bracain (1245-1268), large portions of present-day Co Tyrone were transferred from Clogher to the Diocese of Ardstraw (now part of the Diocese of Derry), and the greater part of present Co Louth, including Dundalk, Drogheda, and Ardee, was transferred to Armagh. 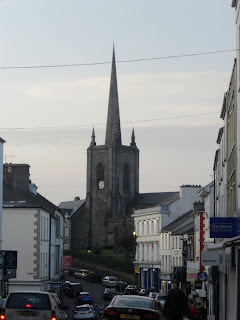 In 1923, Saint Anne’s Church, Enniskillen was designated Saint Macartin’s Cathedral. The intention was to replace the cathedral at Clogher, but Clogher cathedral was never reduced to parish church status, and so the Diocese of Clogher has the unique distinction of having two diocesan cathedrals, yet with a single dean and chapter.

Saint Macartan’s Cathedral in Monaghan serves the Roman Catholic Diocese of Clogher. The cathedral stands high on a hill on an eight-acre site that and can be seen from on all main roads into the town. Monaghan became a cathedral town in the mid 1800s, and Bishop Charles MacNally proposed building the cathedral in 1858. The cathedral architect, James Joseph McCarthy (1817-1882), designed a 14th century Gothic style cathedral. After McCarthy’s death, his work was continued by William Hague. 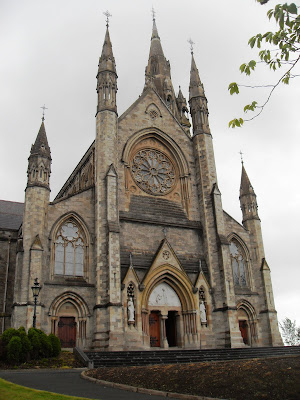 The Collect of Saint Macartan’s Day

Heavenly Father,
we thank you for Macartan, faithful companion of Saint Patrick,
and builder of your church in Clogher:
Build up your church through those whom you call to leadership
in this generation,
and strengthen your church to proclaim the gospel
of reconciliation and peace;
through Jesus Christ our Lord. Amen.