It’s a ‘Wind in the Willows’ thing 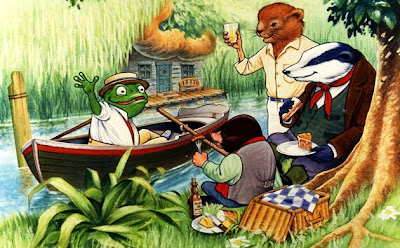 “Believe me, my young friend, there is nothing – absolutely nothing – half so much worth doing as simply messing about in boats. Simply messing”

I suppose it’s just a childish thing. But ever since childhood, I have enjoyed the idea of messing about in boats on the river.

Perhaps it’s a throwback to Kenneth Grahame’s The Wind in the Willows, which was essential childhood reading for everyone in my age group, with all those stories about Mole, Ratty (who is, in fact, a water vole), the donnish Mr Badger and Toad of Toad Hall.

In my teens, my father brought rowing on Lough Ramor in Virginia, but – despite having a good swimming pool at school – I never learned to swim until I was 35, and it is only in recent years that I have started to regret that I never learned to scull or row, or for that matter never learned to sail. When I am in Cambridge each year, I enjoy watching those who are rowing, sculling and punting on the Cam, and I have enjoyed being on a punt once or twice.

Broxbourne hosted the Canoe Slalom events at the Olympic Games last year (2012), and Hoddesdon was supposed to host other canoeing events at Dobb’s Weir, but the water was polluted and the events .were moved further south on the Lee Valley.

I am in Hoddesdon this week for the .annual conference of the Anglican mission agency, Us, which is the new name for UPG, the United Society for Propagation of the Gospel. I am staying on the ground floor in a room near Willow Hall … perhaps I could just imagine staying at Toad Hall, even if I am not around for one of the 50-minute weekend river cruise available at from Dobb’s Weir.

There are some great stately homes in this area, such as Luton Hoo and Brocket Park, and they could easily have been inspirations for Toad Hall in The Wind in the Willows. There are castles, old waterside pubs, gazebos and a busy boating centre at Broxbourne with boats for hire, day trips and cycle hire. 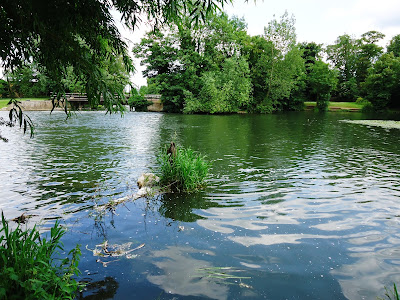 The four-mile walk goes through some of the greenest – and bluest – spaces in the heart of the Lee Valley (Photograph: Patrick Comerford, 2013)

High Leigh is less than two miles from the railway station at Broxbourne. So, this afternoon I fulfilled a long-time dream of walking a four-mile riverside walk that starts and finishes close to Broxbourne Station. This walk goes through some of the greenest – and bluest – spaces in the heart of the Lee Valley. The surrounding reservoirs and marshes are home to many species of birds, some rare breeds and many parts of the Lee Valley have been designated Sites of Special Scientific Interest (SSSI).

The River Lea, which rises at Leagrave in Bedfordshire, is 98 km (58 miles) long, and much of its last 43 km (27 miles) from Hertford was turned into a canal from 1767 by the engineer John Smeaton. Occasionally the navigation leaves the river to follow Smeaton’s new channels, and meandering stretches of the Old River Lea can be seen nearby.

The river’s name has at least 25 different spellings – in addition to Lee and Lea, the names Lay, Ley, Leye, Lyge and even Lyzan have been used in the past, and by 1520 the spelling was Lee. But in the 19th century the Ordnance Survey decided to use both Lee and Lea. Today, the valley is usually known as the Lee Valley, but the river is the River Lea, while the canal sections are called the Lee Navigation. Is it any wonder then that the River Lee Navigation and the River Lea are often confused?

The original River Lea was made wider, deeper and new courses cut during the Industrial Revolution to allow better access for cargo-carrying barges. Grain and malt were brought from Hertford down to the Thames and timber and other cargo were carried back north. The new route was then renamed the River Lee Navigation. But at times during the walk at Broxbourne it is possible to pick out the original River Lea running alongside the River Lee Navigation.

The story of the original River Lea can be traced back over 1,000 years. It figures in the Treaty of Wedmore between King Alfred and the Danes, and later still it occurs in the Domesday Book. What are now quiet waterways were once filled with barges carrying cargo to and from London. Today, this is a place for pretty narrowboats carrying only passengers on their leisurely journey through this blue corridor.

This stretch of the River Lee is rich in wildlife and is the home to many species of mammals, birds and insects including Canadian geese, mallards, blue tits, and dragonflies and the more elusive such as the water vole – there goes Ratty from The Wind in the Willows once again, although mink are making this creature an increasingly rare sight in England. 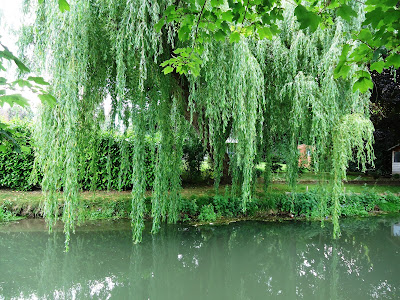 Fine houses and lavish gardens with their willow trees spill over onto the west banks of the New River (Photograph: Patrick Comerford, 2013)

At the west side or back of Broxbourne Station we began our walk along the banks of the New River, where, fine houses and lavish gardens with their willow trees spill over onto the west banks. Here too is Broxbourne Pumping Station, a Grade II listed building, was built by the Victorians in 1886 to pump water from below ground to double the output of drinking water for London city.

The path continued for over a mile along the side of this constructed water course, built in the early 17th century to bring drinking water from local springs to London. Almost 400 years on, this river still supplies London with drinking water and also provides a beautiful environment for people to enjoy.

We were parallel with Hoddesdon when we turned east and made our way through the fields down a narrow path, crossed the railway line at a level crossing (gingerly), and after a quarter of a mile found ourselves at the Lee Valley Caravan Park. From there, it was a few paces to Dobb’s Weir, with its original sluice machinery. 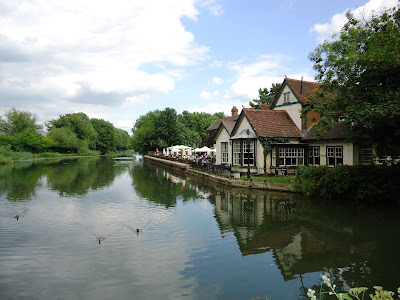 On the west side of Dobb’s Weir, we were in Hertfordshire, on the east side we were in Essex, and we stopped at the Fish and Eels pub (Photograph: Patrick Comerford, 2013)

On the west side of Dobb’s Weir, we were in Hertfordshire; as we crossed over to the east side, we were in Essex. There we stopped at the Fish and Eels pub, and we whiled away half an hour by the waterside, with glasses in hand, watching life go by.

The Fish and Eels is the departure point for 50 minute round-trips on the River Lee with the Lee and Stort Boat Company at weekends and on bank holidays. But there were no boat trips today, and we headed south along the tow path to Carthagena Lock. 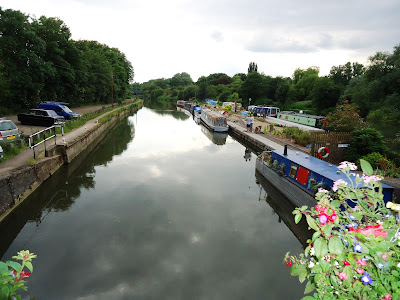 East is east, and west is west, and the Greenwich Mean Line runs through Carthagena Lock (Photograph: Patrick Comerford, 2013)

Oh, East is East and West is West, and never the twain shall meet,
Till Earth and Sky stand presently at God's great Judgment Seat;
But there is neither East nor West, Border, nor Breed, nor Birth,
When two strong men stand face to face, though they come from the ends of the earth!

The Greenwich Mean Line runs through the lock, dividing the eastern and western hemispheres of the world. We are away from everything here, apparently, yet at the centre of the world. 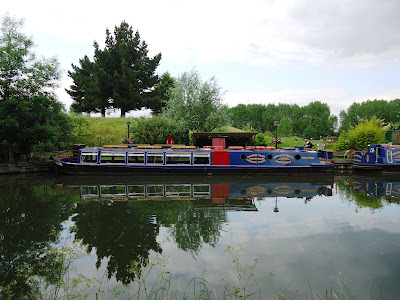 The Lady of Lee Valley and the Pride of Lee offer 50-minute pleasure cruises on the river (Photograph: Patrick Comerford, 2013)

To the east was Admiral’s Lake, said to be one of the best feeding sites for bats in the Lee Valley. On the west bank, two passenger boats, the The Lady of Lee Valley and the Pride of Lee were moored with passengers disembarking after a 50-minute pleasure cruise that can be booked at the Lee Valley Boat Centre.

It was just another half mile south along the towpath to the Lee Valley Boat Centre on Old Nazeing Road and the beer garden of the Crown pub. The boat centre is an ideally place for exploring this part of Hertfordshire. From Easter to the end of the October, the centre offers Day Boats and the hourly hire of electric boats, rowing boats, pedaloes and a Canadian canoe. The centre also offers short breaks from three-four nights or weekly with three chalets with verandas overlooking the Mill Stream, a backwater of the River Lee. 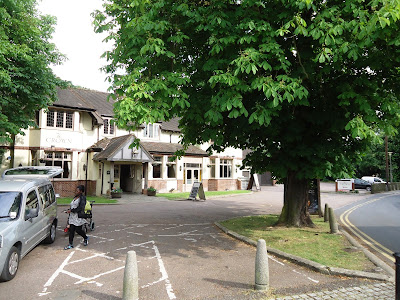 The Crown pub ... at the end of this afternoon's walk (Photograph: Patrick Comerford, 2013)

We finished our walk at the train station at Broxbourne, where the sun was still shining. From there we made our way back through Broxbourne and Hoddesdon to High Leigh.

On a warm summer’s day like today, I can agree with Ratty who says in The Wind in the Willows: “Believe me, my young friend, there is nothing – absolutely nothing – half so much worth doing as simply messing about in boats. Simply messing.” 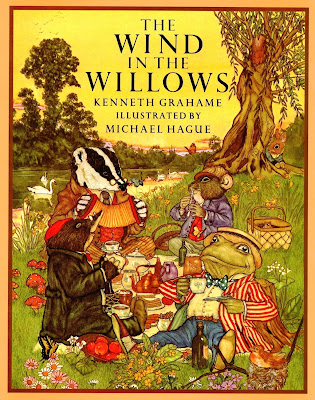 Messing about on the river ... a pleasure on a warm summer’s day

A wonderful post. I love Wind In The Willows. It never fails to warm my heart. A delightful tale that never ages. Thanks for sharing :-))