Three weddings and some
cathedrals on the Amalfi coast 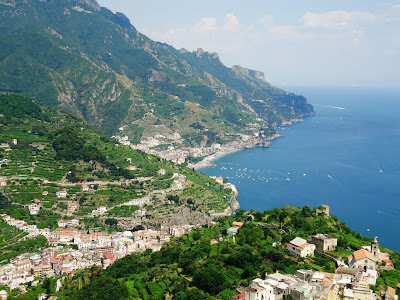 Looking down on the Amalfi coast from Ravello (Photograph: Patrick Comerford (2013)

I spent Saturday [6 July 2013] along the Amalfi Coast, which stretches along the southern coast of the peninsula east of Sorrento.

With its steep shoreline, towering cliffs, rocky outcrops, hairpin bends, with the shimmering blue sea below and one pretty coastal town or pastel-coloured village after another, the Amalfi Coast is a popular location for motor advertising shots and the weekend traffic also showed how this a popular destination for both Italians and the thousands of tourists staying in the Naples and Sorrento area.

I had no mid-life-crisis, open-topped red sports car for today’s journey. Instead, I travelled by coach with the four dozen or so people in our group along the only land route on the Amalfi Coast – the 40 km stretch along the Strada Statale 163, running along the coastline from Positano in the west to Vietri sul Mare in the east. 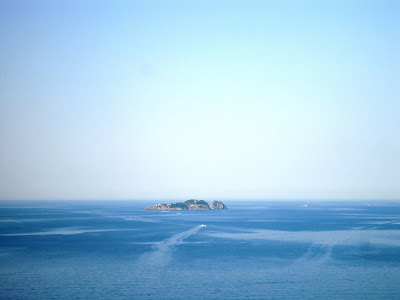 The rocks of Sirenuse ... home to the Sirens who may have given their name to Sorrento (Photograph: Patrick Comerford, 2013)

Below us in the blue sea for the most part of the journey we could see the tiny islands that form Li Galli Archipelago. United the 19th century there were known as Sirenuse and the said to be the home of the mythical Sirens who lured sailors unto the rocks and who may have given their name to Surrentum or Sorrento.

In the 10th and 11th centuries, the Duchy of Amalfi was an independent statelet based on the town of Amalfi. This coastline was part of the Principality of Salerno, until Amalfi was sacked by the Republic of Pisa in 1137. 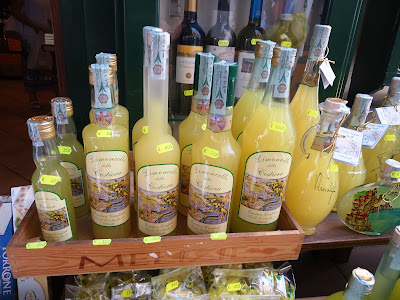 The Amalfi Coast is known for limoncello, a liqueur produced from locally-grown lemons (Photograph: Patrick Comerford, 2013)

In 1997, the Amalfi Coast was listed as a Unesco World Heritage Site and as a cultural landscape. This area is also known for limoncello, a liqueur produced from lemons grown between February and October in the terraced gardens along the coast.

After the unification of Italy, the Amalfi coast has enjoyed a huge economic revival, boosted in the late 20th century by international tourism.

Our first stop was in Positano, a village and commune , mainly in an enclave in the hills leading down to the coast. It was a port in the mediaeval Amalfi Republic.

The church of Santa Maria Assunta has a dome made of majolica tiles and a 13th century Byzantine icon of a black Madonna. According to local legend, the icon was stolen in Byzantium and was being shipped across the Mediterranean by pirates when a terrible storm blew up in the sea near Positano. The frightened sailors heard a voice on board saying: “Posa, posa!” (“Put down! Put down!”) The sacred icon was taken off the boat and carried to the fishing village, and only then the storm abated.

Positano prospered in the 16th and 17th centuries. However, by the mid-19th century, the town had fallen on hard times, and more than half the population emigrated, mostly to Australia.

By the first half of the 20th century, Positano was a relatively poor fishing village. It began to attract large numbers of tourists in the 1950s, especially after John Steinbeck published his short story ‘Positano’ in Harper’s Bazaar in May, 1953.

“Positano bites deep,” he wrote. “It is a dream place that isn’t quite real when you are there and becomes beckoningly real after you have gone.”

After we gone through Positano and stopped briefly on the eastern edge of the town for the panoramic view and freshly squeezed orange juice and once again at a ceramic shop at Grotta dello Smeraldo before continuing on to the harbour town of Amalfi.

I had an internal debate between boats and architecture: would I go on a boat trip with the others out into the Bay of Salerno? Or would I visit the Duomo in Amalfi on my own? 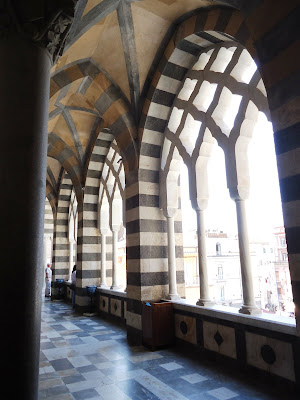 The portico of the Duomo di Sant’Andrea looks down onto the Piazza Duomo below (Photograph: Patrick Comerford, 2013)

I plan to visit Capri on Monday, so architecture won the day today, and I climbed the broad steep steps to the Duomo di Sant’ndrea. And I was just in time too, for a wedding was about to begin, and by the time the boat-trippers returned the bride had arrived and the cathedral was closed to visitors. 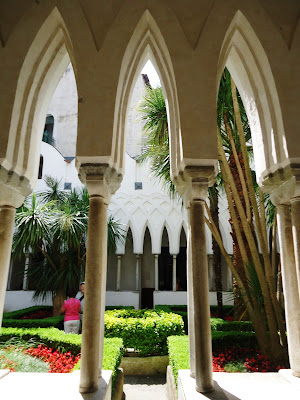 The Cloisters of Paradise with their ornate Moorish-style colonnades (Photograph: Patrick Comerford, 2013)

The cathedral doors were cast in bronze in Constantinople in the 11th century. But the entrance to the cathedral is through the beautifully named Chiostro del Paradiso or Cloisters of Paradise, with its ornate Moorish-style colonnades of white-washed, interlaced arches, palm trees, and inner garden.

The cloisters lead into the museum in the former Basilica di Crocifissio, with bare walls and an eclectic collection of ecclesiastical artefacts, including a bishop’s sedan chair made in Macao in the 18th century, along with paintings, mitres and vestments. 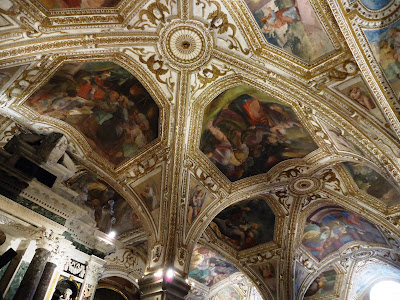 The richly decorated ceiling of the crypt below the Duomo in Amalfi (Photograph: Patrick Comerford, 2013)

Steps lead down to the crypt, with its richly decorated baroque ceiling and a shrine containing the body of Saint Andrew, who gives his name to the cathedral above. The apostle’s body was brought to Amalfi by the Knights of Saint John of Jerusalem, who brought it here in 1204, having plundered it in Constantinople which contains.

The body is buried deep beneath the shrine – although the saint’s head is in Patras in Greece – but the shrine includes a small vessel placed above the coffin to catch a miraculous fluid that is said to flow from the saint’s body ever since the 14th century.

Away from the bustle of the square in the front of the cathedral and back from the busy beach and harbour, the back streets and the stepped side streets were quiet and cool in the mid-day sun.

From Amalfi, we climbed up through the cultivated terraced mountainside and the hairpin bends to Scala, where we had lunch in the Margheritta Hotel, in a balcony looking down on the road we had had climbed in our two small buses. 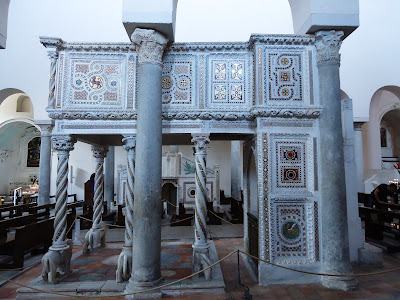 The ornate Gospel pulpit in the Duomo in Ravello (Photograph: Patrick Comerford, 2013)

From Scala, we travelled back down to Ravello, once an independent city state. This was also the setting for part of Richard Wagner’s Parsifal, and here DH Lawrence wrote part of Lady Chatterley’s Lover.

The Duomo, dedicated to Saint Pantaleone, was being prepared for a wedding, but once again I had arrived in time to see the inside of the cathedral and its museum.

The duomo has two ornately decorated pulpits – an Epistle pulpit and a Gospel pulpit. The Gospel pulpit has twisted columns patterned with mosaics resting on six carved lions.

There was time to look inside the tropical gardens of the Villa Rufolo, which inspired Klingsor’s magic garden and the stage design of Wagner’s Parsifal.

Although we could see it from the balconies of Ravello, we never got as far as Salerno.

As we sat to dinner back in the Grand Hotel Moon Valley, a wedding was taking place by the pool, and some of us joined the happy families until late in the evening.

The bride dances at the third wedding in a day (Photograph: Patrick Comerford, 2013)

I'm swooning! The Amalfi Coast is very high on my list of places I'd like to see. I'm following your trip with great interest. (As a side note, I once saw 3 Irish wedding parties in one day—in September 2003.)

I am glad you liked it. The coast is absolutely fantastic and captivating!

Indeed, it's a place full of history, with amazing views, perfect for special events or for a vacation. Good choice!