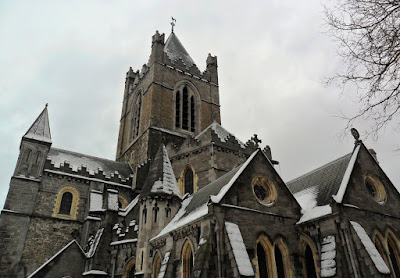 “Ring out the old, ring in the new,/ Ring, happy bells, across the snow ...” the bells of Christ Church Cathedral, Dublin, in the snows (Photograph: Patrick Comerford)

The annual Advent Carol Service of the Church of Ireland Theological Institute takes place this evening [9 December 2015] in Holy Trinity Church, Rathmines, Dublin, at 7 p.m. This year’s carol service takes the form of the traditional Service of Nine Lessons and Carols, and the collection is in support of the Diocese in Europe appeal for its work with refugees in Greece and throughout Europe. This appeal is being co-ordinated in the Anglican Churches on these islands on behalf of the Diocese in Europe by the Anglican mission agency Us, the new name for USPG (formerly the United Society for the Propagation of the Gospel).

The students organising this year’s service have asked me this evening to read the Christmas poem, ‘Ring Out, Wild Bells,’ written in 1850 by Alfred, Lord Tennyson (1809-1892).

This poem was published by Tennyson in 1850, the year he was appointed Poet Laureate. It forms part of ‘In Memoriam,’ Tennyson’s elegy to Arthur Henry Hallam, his sister’s fiancé, who had died at the age of 22.

Although Tennyson has probably gone out of fashion, many of us remember at school reading poems such as ‘The Charge of the Light Brigade,’ ‘Crossing the Bar,’ ‘The Lady of Shalott,’ ‘Locksley Hall’ and ‘Ulysses.’ A number of phrases from Tennyson’s writings have become commonplace in the English language, including “Nature, red in tooth and claw,” “’Tis better to have loved and lost / Than never to have loved at all,” “Theirs not to reason why, / Theirs but to do and die,” “My strength is as the strength of ten, / Because my heart is pure,” “Knowledge comes, but Wisdom lingers,” and “The old order changeth, yielding place to new.”

I was reintroduced to ‘Ring Out, Wild Bells’ while I was listening to Karl Jenkins’s The Armed Man, where the second, seventh and eighth stanzas are set to music by Jenkins in the finale (‘Better is Peace’). 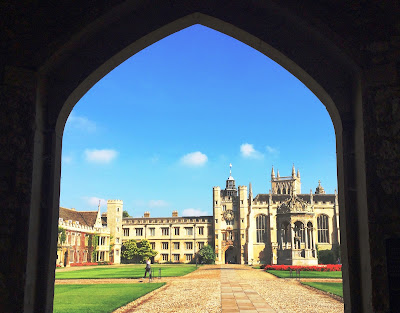 At Cambridge, he joined the Cambridge Apostles, a discussion group that began in Trinity in the 1820s and 1830s, and that has played a part in forming the minds of many leading members of the British intelligensia. Other “apostles” around that time included George Tomlinson, later Bishop of Gibraltar, the theologian and Christian Socialist Frederick Denison Maurice, Charles Darwin’s brother Erasmus Alvey Darwin, the future Archbishop of Dublin Richard Chenevix Trench, and the theologian and the Dublin-born theologian Fenton John Anthony Hort.. Later members included AN Whitehead, Bertrand Russell, GM Trevelyan, EM Forster, Lytton Strachey, Leonard Woolf, John Maynard Keynes, Rupert Brooke, Lionel Penrose, Eric Hobsbawn, Jonathan Miller and Anthony Kelly – and the Cambridge spies Guy Burgess and Anthony Blunt.

Tennyson was born into a strongly clerical family, and some influences from Tennyson are reflected in TS Eliot’s ‘Little Gidding.’ But Tennyson’s views of Christianity were often unconventional. In In Memoriam, he wrote: “There lives more faith in honest doubt, believe me, than in half the creeds.” In Maud (1855), he said: “The churches have killed their Christ.” In Locksley Hall Sixty Years After he wrote: “Christian love among the churches look’d the twin of heathen hate.” In his play, Becket, he declared: “We are self-uncertain creatures, and we may, Yea, even when we know not, mix our spites and private hates with our defence of Heaven.” 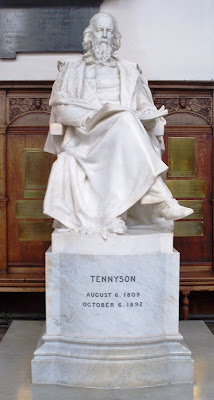 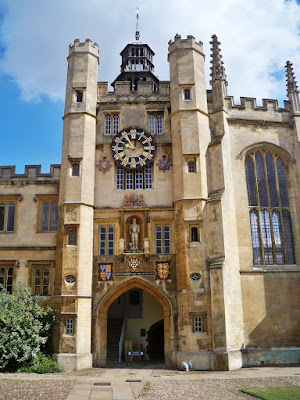