Through Lent with Vaughan Williams
(27): ‘Firmly I believe and truly’ 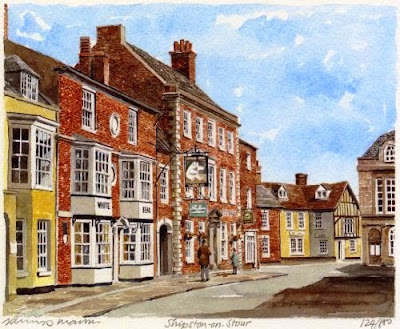 Shipston-on-Stour … a print by Philip Martin. The town ave its name to the fol tune harmonised by Ralph Vaughan Williams

This morning [16 March 2015], I encourage you to join me in listening to the hymn ‘Firmly I believe and truly’ set by Vaughan Williams to the tune of a Warwickshire ballad which he harmonised and gave the name Shipston.

Shipston, with the meter 87 87, was published in the English Hymnal to a text in The Death of Geontius by Cardinal John Henry Newman (1801-1890).

It is set to Shipston in the New English Hymnal (No 360) but the Irish Church Hymnal (No 320) uses the tune Halton Holgate by William Boyce.

This tune is also used for Bishop George Bell’s hymn, ‘God, whose farm is all creation’ (Irish Church Hymnal, No 41).

Shipston was first included in an English folk anthology by Lucy Broadwood (1858-1929), Honorary Secretary of the Folk-Song Society, who collected folk songs throughout these islands at the end of the 19th century. She inherited her interest in folk music from her uncle, the Revd John Broadwood, an important early Victorian collector and the editor of Old English Songs (1847). Her father had also collected a number of old songs in the 1830s and 1840s.

She heard and noted this tune in a ballad being sung at Halford, near Shipston-on-Stour, about 16 km south of Stratford-upon-Avon. It was then in Worcestershire, but is now in in Warwickshire.

The Church of England parish church in Shipston, Saint Edmund, was rebuilt in 1855 by the Gothic Revival architect, George Edmund Street, who also designed the Royal Courts of Justice in The Strand, London, and rebuilt and restored Christ Church Cathedral, Dublin, in the 1870s.

The words in the original ballad, ‘Down by the side of Bedlam City,’ or ‘Don’t you see my Billy coming,’ tell the story of a young woman who laments the man she loves, Billy. He has been killed in battle, but she continues to see visions of his ghost.

Shipston was first arranged by Vaughan Williams for two hymns in the English Hymnal, ‘Jesu, tender Shepherd, hear me,’ and this morning’s hymn, ‘Firmly I believe and truly.’

Firmly I believe and truly
God is Three, and God is One;
And I next acknowledge duly
Manhood taken by the Son.

And I trust and hope most fully
In that Manhood crucified;
And each thought and deed unruly
Do to death, as he has died.

Simply to his grace and wholly
Light and life and strength belong,
And I love supremely, solely,
Him the holy, him the strong.

And I hold in veneration,
For the love of him alone,
Holy Church as His creation,
And her teachings are his own.

Adoration now be given,
With and through the angelic host,
To the God of earth and heaven,
Father, Son and Holy Ghost. Amen.

Tomorrow: ‘Saviour, again to thy dear name we raise’