I spent a few days earlier this week back in Lichfield, and one of the places I visited again was the Samuel Johnson Birthplace Museum and Bookshop.

Tom, who was on work placement in the Museum and Bookshop last year, observed before leaving how it “is truly remarkable how the evolution of the dictionary parallels the changes of our society, and also the adaptations of our language.”

He pointed out that the Dictionary compiled by Johnson is substantially different to the dictionaries we use today, and how we use a dictionary in very different ways.

Samuel Johnson’s Dictionary aimed to convey meanings of words in a literary context. As an example, he looked at the word ‘honorificabilitudinitatibus,’ which is a hapax legomenon from William Shakespeare’s Love’s Labour’s Lost. This particular word means ‘the state of being able to achieve honours,’ and it is the longest word in the English language that features only alternating consonants and vowels.

Today, we use a dictionary simply as a collection of words and their meanings. Many different types of dictionaries are published today, such as bilingual, specialist and etymological dictionaries.

Tom commented: “Without Johnson our lives would be very different, and games of Scrabble would cause many more arguments!” 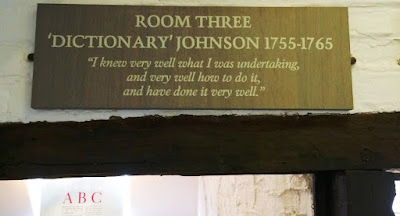 The sign above the ‘Dictionary Room’ in the Samuel Johnson Birthplace Museum and Bookshop (Photograph: Patrick Comerford, 2016)