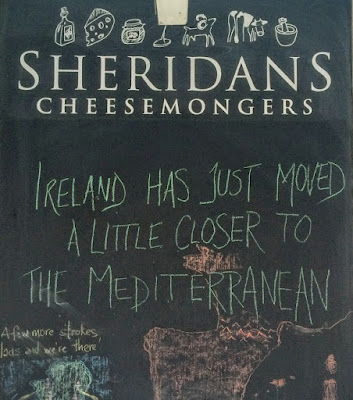 There is a sign on a chalkboard outside Sheridan’s Cheesemongers in South Anne Street, Dublin, that claims with good humour: “Ireland has just moved a little closer to the Mediterranean.”

Further down, beside a map the shows France, Spain and some Mediterranean islands, it adds: “A few more strokes lads and we’re there.”

But what if the Mediterranean moved a little closer to Ireland?

Monday [20 June 2016] was World Refugee Day, and I wondered what “strokes” do our politicians need to pull to place the refugee crisis in the Mediterranean higher on the European priority list?

The United Nations General Assembly proclaimed World Refugee Day from 20 June 2001 on because that day marked the 50th anniversary of the 1951 Convention on the Status of Refugees.

The convention says a refugee is someone who, “owing to a well-founded fear of being persecuted for reasons of race, religion, nationality, membership of a particular social group or political opinion, is outside the country of his nationality, and is unable to, or owing to such fear, is unwilling to avail himself of the protection of that country.” 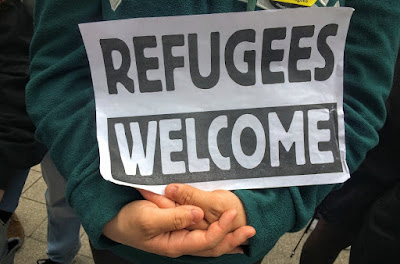 To marked World Refugee Day in Dublin, I took part in a street protest in Dublin supported by United Against Racism, Amnesty International, the Irish Anti-War Movement and other groups.

One of the leaflets handed out yesterday offered to debunk some of the myths about refugees:

What about our own? One-in-six people born in Ireland lives abroad, the world looks after our own … go figure that one.

They’re not real refugees, they have smartphones: refugees are fleeing persecution, not poverty.

Refugees = ISIS: ISIS? In a dinghy? You must be joking. They’d fly with forged papers.

Why are there so many men? They risk the journey first to pay for their families’ safe journey later.

Providing rescue attracts more refugees: They must and will flee, whether we help or not.

“No one puts their children in a boat unless the water is safer than the land.” 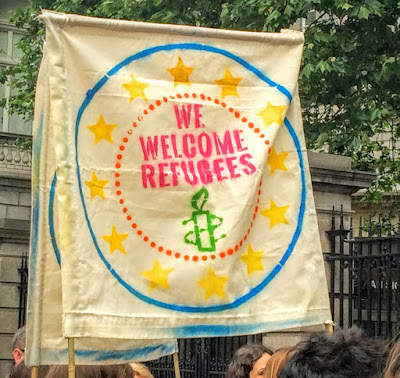 The UN refugee agency released a report yesterday saying that the number of refugees and internally displaced people worldwide stood at 65.3 million at the end of last year. The record number is because persecution and conflict in places like Syria and Afghanistan have led to an increase in their numbers.

1. More than half of the world’s refugees are children.

2. Albert Einstein and Sigmund Freud were refugees, along with music artists MIA, Wyclef Jean and the Dalai Lama. The Dalai Lama, who was forced to flee Tibet at a young age, remains a refugee.

4. More people are displaced today than any time since World War II. For the first time since World War II, the number of refugees, asylum-seekers and internally displaced people worldwide has exceeded 50 million people. Every day, more than 40,000 people worldwide are forced to flee their homes. This is equivalent to the population of Longford. While more than one million migrants crossed into Europe in 2015, an overwhelming 86% of refugees are hosted by developing countries.

5. The contraceptive pill, fish and chips, the mini, and Sriracha, the hot sauce with a cult following, were all invented by refugees. The key ingredient for the contraceptive pill was developed by Carl Djerassi, an Austrian refugee. Jewish refugees fleeing persecution in Portugal in the 17th century brought fish and chips to Britain. The Greek refugee who created the iconic Mini, Sir Alec Issigonis, fled from Turkey in 1922.

6. Syria was the world’s second-largest refugee hosting country before war broke out in 2011. Today Syria is the largest refugee producing country in the world, with a staggering 4.2 million refugees. The crisis has been raging for over five years, resulting in the internal displacement of 7.6 million people. An average of one bomb a day fell on the province of Idlib in northern Syria in October, an area about the size of Galway. 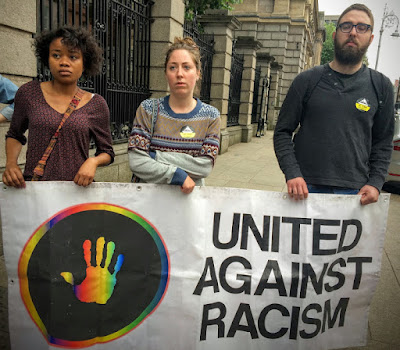 Outside Leinster House during the march yesterday, the historian John Molyneux of the Irish Anti-War Movement read the poem ‘Refugee Blues’ by WH Auden:

Later, as I walked down Grafton Street, a busker opposite Marks and Spencer was playing the haunting theme music from Schindler’s List, and I wondered what has changed over 75 years and what have we learned since then. 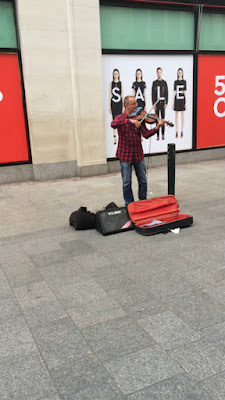 Busking in Grafton Street last night … what have we learned since World War II? (Patrick Comerford, 2016)