‘Our intimacy with creation must never
stop short at contemplative admiration’ 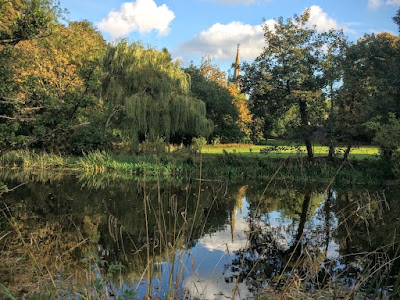 The spire of Saint Andrew’s and the overhanging willows at Lucan reflected in the waters of the River Liffey late this afternoon (Photograph: Patrick Comerford, 2016)

After the wedding on Friday and Saturday in Macreddin Village, Co Wicklow, I returned to a busy working weekend in Dublin, teaching on the part-time MTh course and the Reader course.

During the course of one lecture, I was engaging students in the links between the Eucharist and the Creation.

Later, in an email, one student quoted the late Father Herbert Edwin William Slade (1912-1999), a priest of the Society of Saint John the Evangelist or the Cowley Fathers in Oxford, who wrote:

The Eucharist is the supreme model of an intimacy with nature which is universal. All creation is God’s body. God indwells all of his creatures. God’s Spirit is present in all that God has made. Therefore, our intimacy with creation must never stop short at contemplative admiration. 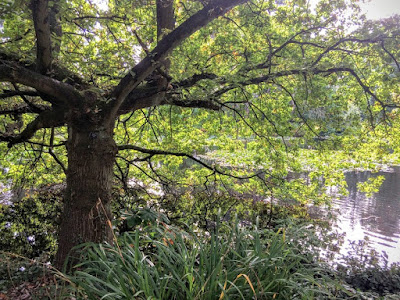 Autumn reflections at the boating lake in Farmleigh this afternoon (Photograph: Patrick Comerford, 2016)

After this morning’s Eucharist at the end of this intense working weekend, two of us decided to continue this ‘intimacy with creation’ and went for walks by the Boating Lake at Farmleigh in the Phoenix Park and later by the River Liffey and the weir in Lucan Village.

This had been a beautiful bright Sunday afternoon, and although the leaves on the trees are turning through the full range of autumn colours, the temperatures moved between 17 and 20 making it fell more like late summer than mid-autumn.

At the Farmleigh Gallery, we went to see ‘Adaptations,’ an exhibition marking the 400th anniversary of the death of William Shakespeare in 1616. This was the last day of this an exhibition of new work by Alex Scott (Ceramics), Alva Gallagher (Glass), Helen McAllister (Textiles), Nigel Cheney (Textiles) and Seliena Coyle (Metals) – five very different practitioners who work in the Applied Arts.

This exhibition has interpreted and responded to Shakespeare’s work in a nuanced and particular way, sharing an affinity for making, for layered meaning and codified details through applied material based practices, taking very different approaches to his tragedies, comedies and historical dramas.

There were particular emphases on The Merchant of Venice, and – naturally, given the recent reburial in Leicester Cathedral – on Richard III. But here too were Hamlet, Romeo and Juliet, Macbeth, Othello, Troilus and Cressida, The Tempest, and As You Like It.

Later, after a late lunch in the Boathouse Café, we went for a another walk around the boating lake, and then drove through Blanchardstown and along the ‘Strawberry Beds’ for a walk by the River Liffey and the Village Weir at Lucan.

The bright blue skies above the river in the late autumn evening light was casting strong reflections on the waters of the river, reflecting the overhanging willow trees and the spire of Saint Andrew’s Church on the other side of the river.

It was natural to appreciate how ‘God’s Spirit is present in all that God has made.’ Before returning to a full working week tomorrow, my ‘intimacy with creation’ had not stopped ‘short at contemplative admiration.’ 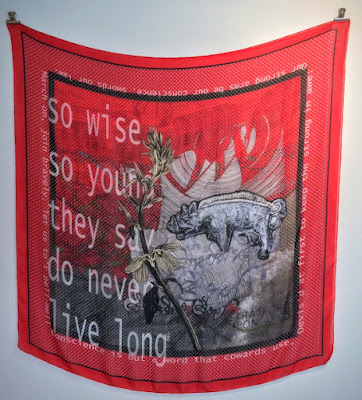 Posted by Patrick Comerford at 19:28