Searching for the ‘rotten borough’
of Carysfort after a wedding 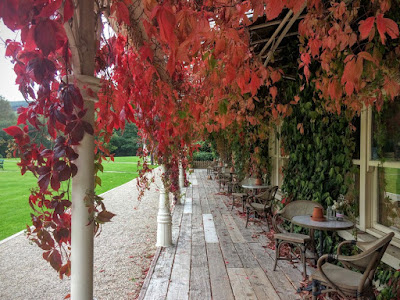 I was at a family wedding yesterday in Macreddin Village in south Co Wicklow yesterday [7 October 2016] and have stayed overnight in BrookLodge Hotel, a country spa hotel 6 km north of the village of Aughrim.

BrookLodge is by Acton’s Country Pub and the dining options here include the Strawberry Tree, which claims to be Ireland’s only certified organic restaurant, and La Taverna Armento, an Italian taverna. The BrookLodge Hotel and Wells Spa opened in 1999, and the resort includes an equestrian centre, golf course, bakery, smokehouse, pub and microbrewery, and food, wine and craft shops.

Macreddin, once known also as Moycreedin, is said to take its name (‘the Valley of Credin’) from Credin, a fifth century local saint chief who is said to have been killed by his enemies and brought back to life by Saint Kevin of Glendalough. 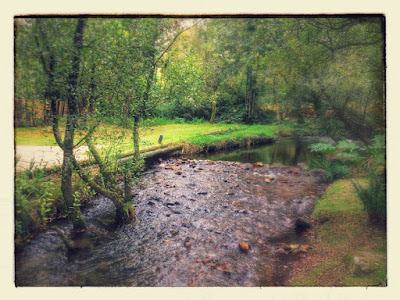 Macreddin is in a designated area of natural beauty and ‘an area of archaeological potential and significance’ (Photograph: Patrick Comerford, 2016)

This is a designated area of natural beauty and ‘an area of archaeological potential and significance.’ Across the village green from the BrookLodge is an old stone bridge over Ballycreen Brook and above the village in a 17th century graveyard.

Co Wicklow was shired in 1606-1607, and so was the last county to be formed in Ireland, taking in the southern part of Dublin (with the exception of three ‘islands’ or enclaves of church property, and the northern part of what was then ‘Catherlough’ or Co Carlow, including Arklow. Two decades later, when Henry Cary, 1st Viscount Falkland, was Lord Deputy of Ireland in 1625-1628, a fort was built at Macreddin and was named Carysfort in his honour. 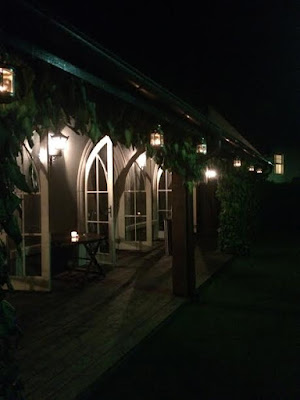 In 1628, Carysfort was incorporated as a borough under a royal charter from King Charles I, and the corporation was given the same powers as a similar borough at Jamestown, Co Leitrim.

The charter granted the Sovereign (mayor) and the 12 ‘free burgesses’ or members of the corporation ‘600 acres of arable land and pasture, and 276 acres of bog, mountain, wood, and underwood’ in free burgage, and three smaller parcels of land in socage to each fund a specific purpose: first the garrison, second a Church of Ireland curate and glebe, and third a free school. The other royal colleges or schools established around the same time were at Armagh, Banagher, Cavan, Dungannon, Enniskillen, Portora and Raphoe, and Carysfort Royal School was the only one outside the province of Ulster.

During the Rebellion in 1641, the garrison in Carysfort was withdrawn to Dublin and the site fell to the O’Byrnes.

However, a new royal 1688 charter granted in 1688 by King by James II renewed the royal grants, and the Borough of Carysfort continued to return two MPs to the Irish House of Commons until the Act of Union.

By the 18th century, Carysfort was a ‘pocket borough’ in the hands of the Proby family, who took the title of Baron Carysfort in 1752.

The Proby family was descended from Sir Peter Proby, who was Lord Mayor of London in 1622. His great-great-grandson, John Proby, was MP for Huntingdonshire and Stamford. His son, also John Proby, was a Whig politician and a Lord of the Admiralty. In 1752 he became an Irish peer with the title of Baron Carysfort, of Carysfort in the County of Wicklow.

When the Act of Union was passed in 1800, the borough was disfranchised along with other ‘rotten boroughs.’ The Earl of Carysfort was paid £15,000 in compensation for the loss of his patronage and was made a member of the British House of Lords with the additional title of Baron Carysfort of the Hundred of Norman Cross in the County of Huntingdon.

Lord Carysfort’s titles and estates passed to his second son, John Proby (1780-1855), as the second earl. He was an army general, and when he died unmarried he was succeeded by his younger brother, Granville Leveson Proby (1782-1868), the third earl, who was an admiral.

William Proby (1836-1909), the fifth and last Earl of Carysfort, was Lord-Lieutenant of Co Wicklow (1890-1909). He had no children, and when he died in 1909 the family titles died out, while the Proby family estates were inherited by a cousin, Colonel Douglas Hamilton, who had changed his surname to Proby in 1904.

The Proby family is still remembered in the Proby and Carysfort names in streets and squares in Blackrock, Co Dublin. But why did the village of Carysfort at Macreddin fail to prosper, and why did it die out?

Fairs were held on the village green until the 18th century (Photograph: Patrick Comerford, 2016)

There are no visible traces of the fort of Carysfort today, although the site is reputed to be in Castle Field. The elevation of Carysfort was too high and the inhabitants soon moved south down the valley to Aughrim. In the 18th century there was still a fairground at the crossroads, with ‘riotous’ two-day fairs at Whitsun and All Saints.

After the 1798 Rising, the rebel leader Michael Dwyer stayed in Macreddin while he was hiding in the Wicklow Mountains.

By 1835 all lands except those attached to the school had been alienated. In 1835, the Commissioners into Municipal Corporations in Ireland reported the charter did not appear ‘ever to have been acted on for any corporate purpose, except that of returning Members to Parliament before the Union.’

The report described Carysfort as ‘a small village, containing a few houses of the humblest class,’ and concluded: ‘There is but a thinly-scattered population in the neighbourhood, and neither trade nor commerce of any kind in the village, and there seems to be no occasion whatever for reviving the corporation.’ 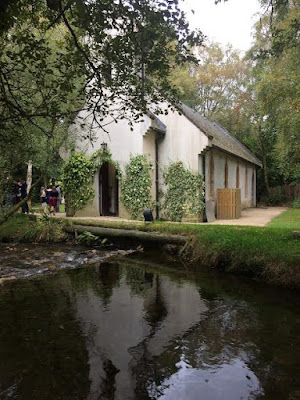 The former Church of Ireland church at Macreddin closed in 1991 (Photograph: Patrick Comerford, 2016)

In the Church of Ireland, Carysfort had a royal chapel, originally a thatched chapel by the school in Sheeana. It was served by the Rector or curate of Rathdrum or by the perpetual curate or Vicar of Ballinaclash, where a church was built in 1832. A chapel of ease was opened in 1869 to replace that at Sheeana, but this closed 25 years ago in 1991. It is now used as a secular wedding venue.

Carysfort Royal School, which was established under the 1628 charter, was first funded from the income from the royal grant of lands. But over time the income was not used wisely and the school was one of poor quality. A new school was built in 1833, but it remained ‘a small, neglected, and inefficient primary school,’ and in 1887 its endowment was transferred to fund schools in Aughrim and Rathdrum. In 1925 the management was transferred to the Department of Education. 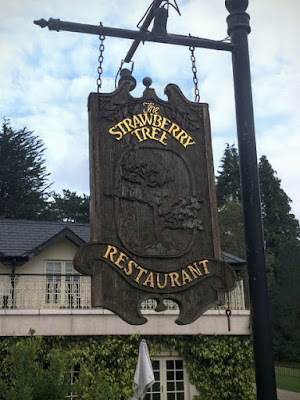