The Dublin Family Who Became
Missionary Martyrs in China 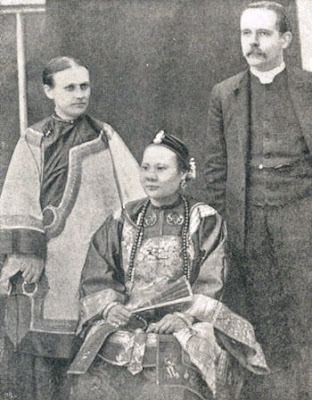 When Rev. Robert Warren Stewart (1850-1895), his wife Louisa (Smyly), two of their children and seven other missionaries, were murdered in China in 1895, the massacre might have marked the end of Irish Anglican mission work in China. Instead, the story became an example of religious and missionary heroism and became an inspiration for many people who went from Ireland to China with Anglican mission agencies.

Robert Warren Stewart was born into a privileged background in Dublin on 9 March 1850. His father, James Henry Stewart (1805-1889), a Dublin magistrate, was a nephew of the Duke of Wellington, while his grandfather, Henry Stewart (1749-1840), was twice MP for Longford in the Irish House of Commons before the Act of Union.

Robert received an English public school education at Marlborough College, but returned to Ireland to study at Trinity College Dublin. Initially, he planned a legal career in London, but he experienced a spiritual crisis and a religious conversion in Richmond, Surrey, and at the age of 25 offered himself for service to the Church Missionary Society in 1875.

He was ordained in Saint Paul’s Cathedral, London, on Trinity Sunday 1876, and shortly afterwards he married his childhood friend from Dublin, Louisa Katherine Smyly, a daughter of Ellen Smyly (1815-1901), founder of ‘Mrs Smyly’s Homes’.

There was no time for a honeymoon, and Robert and Louisa left for China in September and on 14 November they arrived in Fuzhou in Fujian Province, halfway between Shanghai and Canton.

Robert’s first years in China were spent in training Chinese teachers and catechists, while Louisa took charge of a school training Chinese women to teach from the Bible. However, their educational work was interrupted in 1878 with the renewal of a conflict known as the Wu-shih-shan Case, when the missionaries’ theological college was burned down and the mission was expelled from the city.

In 1885, Robert was on leave and back home in Dublin when he was asked to address one of a series of meetings at the beginning of the new academic year in TCD. The organisers were inspired by the recent formation of university missions in Cambridge (1877) and Oxford (1880), and Robert Stewart was so inspiring a speaker that on one night forty young men came forward and offered themselves for missionary work.

Back in China, Robert Stewart suffered severely from dysentery in China, and after another return visit to Dublin in 1891 he went on a fundraising tour to Australia, India and Canada before returning to China in full health in the autumn of 1893. Before returning to China, the Stewarts left their eldest child, Arthur Dudley Stewart, and two other children in the care of Robert’s father who was living in Kingstown (Dun Laoghaire).

Back in China, the Stewarts began working in Gutian (Ku-Cheng) in north-east Fujian. But China was now at war with Japan, and the war stirred an open, armed revolt against the provincial government.

Early on the morning of 1 August 1895, in the small village of Huashan (Hwa-Sang), in the hills above Gutian, the children who had returned with them to China were gathering flowers when they were attacked suddenly by a band of Buddhist group of rebels known locally as the Zhaijiao or ‘Vegetarians.’

Five-year-old Herbert Stewart, and his baby sister Hilda, were murdered along with their Dublin-born nurse Helena Yellop. Within minutes on that summer morning, Robert and Louisa Stewart, Hessie Newcombe from Ireland and five other women missionaries – three from Australia and two from England – had been murdered too. The other Stewart children survived miraculously.

The Kucheng Massacre was one of the worst attacks on foreigners in China before the Boxer Rising in 1899-1901; the only comparable event in missionary history in China is the Tianjin Massacre of 1871. But instead of causing the surviving missionaries to take flight and flee, the murders fuelled a wave of enthusiasm that swept through the Church in Fujien, and saw a growth in support in Ireland for the work of the Dublin University Mission.

Reverend Stratford Collins, who had arrived in China in 1888 as the first missionary from the Dublin University Mission, later recalled that shortly before his martyrdom Stewart had asked him: ‘Why does not someone found a society for the study of the thirteenth chapter of first Corinthians, and what good might be done!’ That chapter includes the words: ‘Love is patient; love is kind; love is not envious or arrogant or rude … It bears all things, believes all things, hopes all things, endures all things. Love never ends’ (I Cor 13: 4-8).

Collins, who returned to China that year, asked some friends as he left Ireland: ‘Is it not better to be called away suddenly in the mission field than to die bit by but at home?’ Two years later, Collins was drowned in the River Min in 1897, and his distressed widow and two of their children drowned tragically at sea on the way home to Ireland.

The Stewarts were the parents of eight children in all. Their eldest son, Arthur Dudley Stewart (1877-1948), had stayed at home with his grandfather in Dun Laoghaire. He too became a missionary in China, and worked in Hong Kong for 28 years, and for 21 years he was the principal of Saint Paul’s College.

Today, the Dublin University Far Eastern Mission continues to work on fostering and developing links between the Church in China, the Anglican Church in Hong Kong and the Church of Ireland.

‘The Dublin Family Who Became Missionary Martyrs in China’ was first published in Salvador Ryan (ed), Treasures of Ireland, Vol III, To the Ends of the Earth (Dublin, Veritas, 2015), pp 142–145.