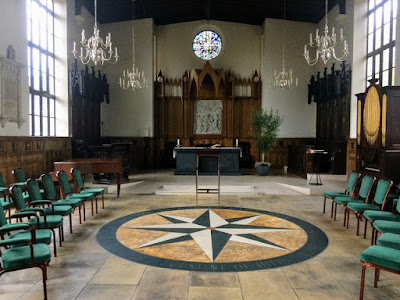 Inside the Chapel of the Royal Foundation of Saint Katharine in Limehouse in the East End of London (Photograph: Patrick Comerford, 2016)

The values of ‘Worship, Hospitality and Service’ are at the heart of the life of the Royal Foundation of Saint Katharine and have become the motto of the foundation.

I was staying in Saint Katharine’s last week during a residential meeting in the East End of London of the trustees of the Anglican mission agency USPG, and found it was not only an oasis in the East End, but a place of beauty, with a chapel of architectural importance, and interesting works of art throughout the chapel, the house and the gardens. 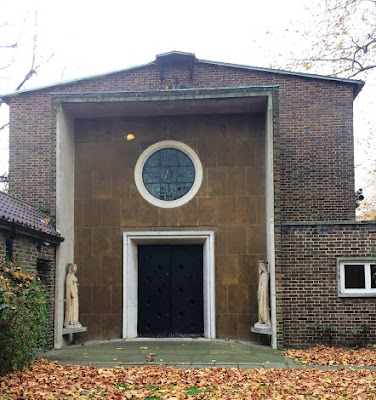 The entrance to the chapel with statues of Queen Philippa to the left and King Edward III to the right (Photograph: Patrick Comerford, 2016)

At each side of the doors leading into the chapel are statues of Queen Philippa to the left and King Edward III to the right. The glazed entry doors came from Andrew Pynter’s chapel built in 1828 when Saint Katharine’s moved from the East End to Regent’s Park.

Above the door are carved 17th century panel with putti, the side ones making music and singing. 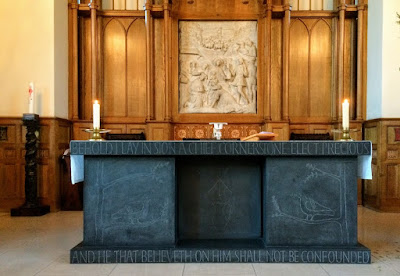 The Altar in the chapel designed by Keith Murray with the reredos above (Photograph: Patrick Comerford, 2016)

The reredos above the altar is a remarkable relief of the Adoration of the Magi, which was moved out of the Cloister in 2004 and restored. The imagery is similar to a painting in the 1470s by Benevenuto di Giovanni in the National Gallery in London.

Above the reredos, an east window was installed in 2004 depicting the wheel on which Saint Katharine was tortured before her martyrdom.

In front of the Altar, in the centre of the floor of the chapel, a Compass Rose was laid in 2004 with a circle of granite brought back from Saint Catherine’s Monastery on the slopes of Mount Sinai, the world’s oldest Christian monastery. 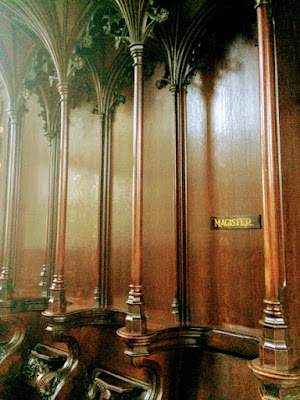 The Master’s stall among the choir stalls in the chapel (Photograph: Patrick Comerford, 2016)

The richly carved choir stalls came from the mediaeval Church of Saint Katharine by the Tower. They are outstanding examples of 14th century wood-carving but, alas, are only a fragment of the 24 stalls that survived until the 18th century.

All these stalls have misericords with delightfully lively figures, including an angel blowing bagpipes, an elephant and castle with a single rider, and the devil grabbing two chattering women.

A misericord among the choir stalls in the chapel (Photograph: Patrick Comerford, 2016)

The oak panels around the chapel are decorated with the coats of arms of some of the Masters of Saint Katharines’s from the 15th to the 19th century.

The hexagonal pulpit has marquetry panels of domes and spired churches. It was once believed that this pulpit was a gift of former master Sir Julius Caesar, but recent studies of the mouldings suggest that it is an 18th century work based on earlier designs.

The font in the chapel was a gift from Queen Victoria (Photograph: Patrick Comerford, 2016)

The font, on a 17th century pedestal, was given by Queen Victoria. The Paschal Candlestick depicts Saint Blaise and Saint Katharine. 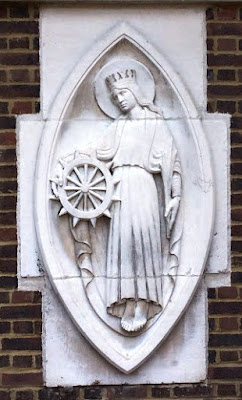 The carved relief of Saint Katharine on the north wall of the chapel (Photograph: Patrick Comerford, 2016) 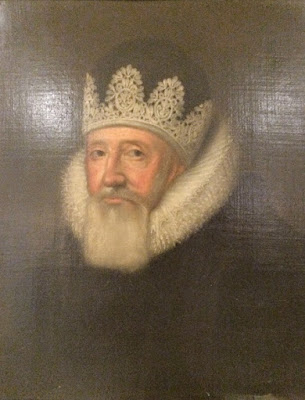 If the chapel is a integrated work of art on its own, then there are also many interesting works of art throughout the foundation, in the buildings and in the gardens.

Inside the foundation, visitors are greeted by an icon of Saint Katharine in the reception area. This was commissioned by the Community of the Resurrection, which was present here for 45 years until 1993.

In the main sitting room, a portrait of Sir Julius Caesar (1557-1636), Master of Saint Katharine’s from 1596 to 1636, hangs above the fireplace. The son of an Italian immigrant doctor, Cesare Adelmare from Treviso, a physician to Queen Mary I and Queen Elizabeth, Julius was baptised in the Saint Dunstan’s-in-the-East in 1558. A judge and MP for Windsor, he changed his name in his ambitious pursuit of his career, and became Chancellor of the Exchequer. 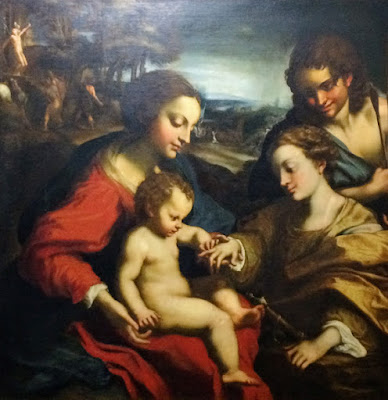 In a corridor nearby is a fine painting of the Mystical Marriage of Saint Katharine by the School of Corregio. The original is in the louvre in Paris. This copy was painted for Queen Henrietta Maria, the French-born wife of King Charles I and patron of Saint Katharine’s. It is said it was pained to alleviate her homesickness for France. 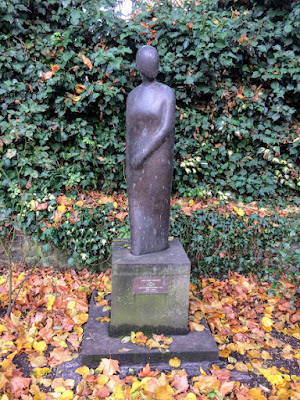 ‘Love is My Meaning’ ... a sculpture by Naomi Blake in the gardens of Saint Katharine’s (Photograph: Patrick Comerford, 2016)

The garden outside includes a number of sculptures and statues, including one in the Queen Elizabeth Garden by Naomi Blake and named ‘Love is My Meaning,’ unveiled in 2000

Another work by Naomi Blake is ‘Genesis’ (1994), a figure of a mother and child with an inscription explaining that this work was given in honour of Lady Elizabeth Basset and ‘to promote understanding between people of different faiths.’

Naomi Blake was born in Mukaĉevo, Czechoslovakia (now Mukacheve, Ukraine) to Jewish parents in 1924. The youngest of 10 children, her original name was Zisel Dum.

She survived the Holocaust as a child in Auschwitz, although many members of her family died there. In 1942, her family included 32 members: four grandparents, her parents, nine siblings, six spouses and ten young nieces and nephews. In 1944, when Naomi was 20, most of her family was deported to Auschwitz and she was separated from everyone except her older sister Malchi, as her father, another sister and her nieces and nephews were led into the gas chambers. Of the 32 family members before the war, only had seven survived by 1945.

After World War II, she lived in Milan, Rome and Jerusalem, before making her home in North London. She changed her name to Naomi in 1948 and later she married Asher Blake. She studied at the Hornsey School of Art, now Middlesex University in 1955-1960.

Much of Naomi Blake’s work has focused on the expression of her experiences. However her work is principally optimistic, forward looking and positive. It stands determinedly to help keep alive the legacy of the six million Jews slaughtered in the Holocaust, as well as promoting her vision for uniting faiths, building understanding between religions and her hope for the future.

Her work has been exhibited in many galleries, in the Britain and abroad, and her sculptures can be seen at many sites, including Fitzroy Square and St Ethelburga’s Church, London, the University of Leicester, the Holocaust Centre, Nottinghamshire, and many royal collections.

In the week after visiting Auschwitz and Birkenau, it was startling to come across this survivor’s work in the gardens of the Royal Foundation of Saint Katharine in London. 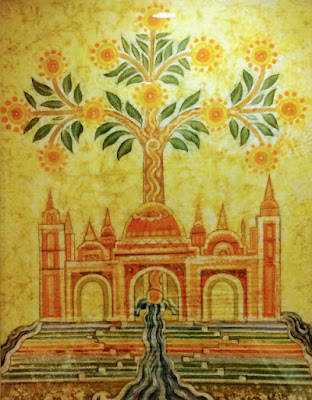 ‘The Holy City’ … one of the many works of art in the Royal Foundation of Saint Katharine (Photograph: Patrick Comerford, 2016)