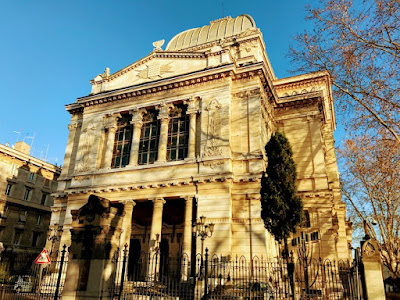 The Great Synagogue of Rome was built in the 1870s after Italian Unification (Photograph: Patrick Comerford, 2017)

During my visit to Rome this week, I crossed the Tiber at Ponte Garibaldi, from Trastevere, which was once a vital centre of Jewish life, to Lungotevere dei Cenci to visit the former Jewish ghetto, the Great Synagogue of Rome, and Rome’s Jewish Museum.

The Jewish community in Rome is said to be the oldest in Europe and also one the oldest continuous Jewish settlements in the world, dating back to the first century BC.

With Italian unification in 1870, King Victor Emanuel, dismantled the ghettoes and gave Jews full citizenship. With the collapse of the Papal States, Jews were fully integrated into Italian society, becoming became professors, generals, admirals and politicians.

Both Mussolini’s biographer, Margharita Sarfatti, and his Minister of Finance, Guido Jung, were Jews, and about 48,000 Jews were living in Italy in 1931.

The Nazi war criminal Erich Priebke was convicted for crimes against humanity, including the massacre at the Ardeatine Caves outside Rome, where 335 civilians, mostly Jews, were slaughtered in cold blood.

About 8,000 Italian Jews perished in the Holocaust, but about 80 per cent of the Italian Jews survived World War II. 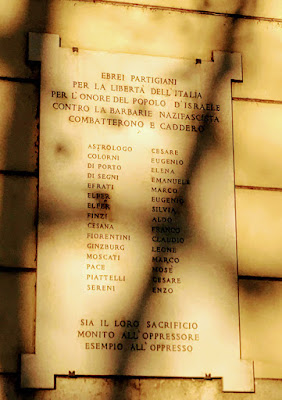 A plaque at the Great Synagogue remembers some Jewish members of the Italian resistance (Photograph: Patrick Comerford, 2017)

Today, a diverse community of 15,000 Jews lives in Rome. Since 1987, the Jewish community has special legal rights that allow Jews to abstain from work on the Sabbath and to observe Jewish holidays.

There are at least 13 synagogues in Rome. The continual presence of a Jewish community in Rome for more than 2,000 years has created a distinctive tradition of prayer – comparable to the Sephardic or Ashkenazi traditions – called the Nusach Italki or Italian rite. The nusach has its own order of prayer and tunes.

Most synagogues in Italy are Sephardic, and three of the 13 synagogues – Itlaki, Sephardic and Ashkenazi – are located under the same roof at Via Balbo 33. There is also a special synagogue for the Libyan Jews who moved to Rome after the Six-Day War in 1967. 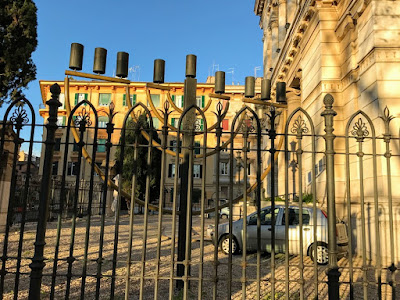 A Menorah outside the Great Synagogue of Rome (Photograph: Patrick Comerford, 2017)

In 161 BC, Jason ben Eleazar and Eupolemus ben Johanan came to Rome as the envoys of Judah Maccabee. Other delegations were sent by the Hasmonean rulers in 150 and 139 BC.

After the Romans invaded Judea in 63 BC, Jewish prisoners of war were taken back to Rome as slaves, Jewish delegates came to Rome on diplomatic missions and Jewish merchants travelled to Rome on business. Many of these Jews stayed in Rome stayed and the Jewish population grew quickly.

Julius Caesar had positive attitudes to the Jews and encouraged them to settle throughout the Roman Empire. When Caesar was killed by Brutus in 44 BC, Roman Jews spent day and night at his tomb, weeping over his death.

Later, two synagogues were founded by slaves who had been freed by Agrippa in 12 BC and by Augustus in 14 AD. The synagogue of Ostia Antica is among the oldest in Europe and one of the oldest in the world. 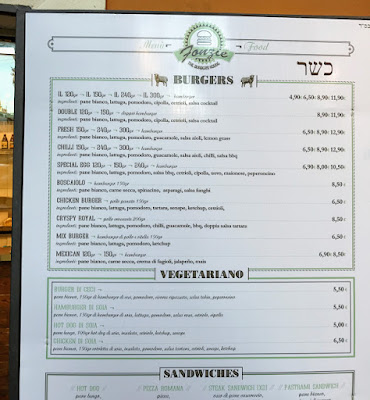 Kosher burgers – including vegetarian burgers – on sale in a kosher café in the former ghetto (Photograph: Patrick Comerford, 2017)

Jews were exiled from Rome twice, in 19 AD and again in 49-50 AD. But those exiles may not have been enforced fully or lasted a long time.

During the Roman-Jewish wars in Palestine in 66-73 and 132-135, Jewish prisoners were taken to Rome as slaves, and some Jewish Roman families say they can trace their place in Rome back to this period. An important Jewish relic is the Arch of Titus, opposite the Roman Forum, built in 70 AD after his Judean victory. It shows the triumphal parade with the Temple vessels carried aloft, including a menorah.

In 212, Caracella granted the Jews the privilege of becoming Roman citizens. They included shopkeepers, craftsman, peddlers, poets, physicians and actors. At the time, there were 12 synagogues in Rome, although none of those synagogues has been preserved.

Constantine the Great (306-336) enacted laws limiting the rights of Jews as citizens. Jewish synagogues were destroyed by Christian mobs in 387-388 and in 493-526. But there was a revival in Hebrew studies in Rome, centred on a local yeshiva, Metivta de Mata Romi. Well-known scholars who contributed to Jewish learning included Rabbi Kalonymus ben Moses, Rabbi Jacob ‘Gaon’ and Rabbi Nathan ben Jehil, who compiled a Talmudic dictionary.

From the 1200s to the mid-1400s, the treatment of the Jews varied from one Pope to the next. Pope Boniface IX (1389-1404) had a succession of personal physicians who were Jewish and recognised the rights of Jews as citizens. On the other hand, Eugenius IV (1431-47) passed anti-Jewish legislation in the Council of Constance. The Jews of Rome prospered in the climate of the Renaissance and became merchants, traders, bankers and artisans.

However, Pope Paul IV decreed in 1555 that all Jews must be segregated into their own quarters or ghettoes. They were forbidden to leave their homes at night, and were forced to wear a distinctive yellow hat. 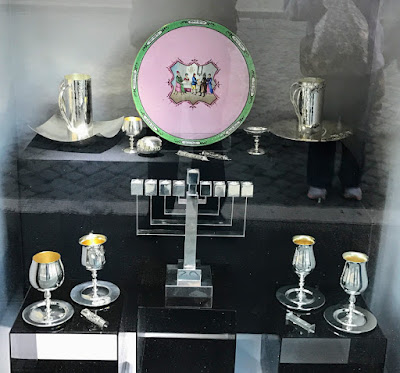 A display in a shop window in the former ghetto (Photograph: Patrick Comerford, 2017)

More than 4,700 Jews lived in the seven-acre ghetto on the banks of the Tiber, opposite Travestere. Raids of the ghetto were common, and every Saturday a number of Jews were forced to leave the ghetto and listen to sermons in local churches.

After Italian unification, the Great Synagogue of Rome on Longotevere Cenci was built from 1874-1904 after the emancipation of the Jews following Italian unification. It has a unique Persian and Babylonian architectural design that contrasts with the rest of the city, which uses an ornamental baroque style.

Over 2,000 years, the Jewish community of Rome has left many interesting records and artefacts ever found in Europe. Many of these archaeological finds are on display in the newly renovated Jewish museum inside the Great Synagogue, the Museo Ebraico di Roma, which documents and narrates the history of Rome’s Jewish community. 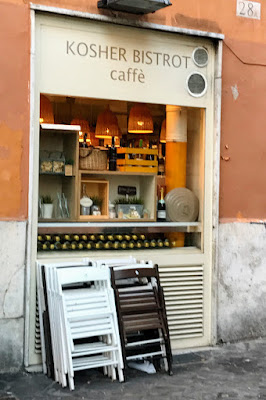 There are kosher cafés throughout the former ghetto (Photograph: Patrick Comerford, 2017)

Nearby, the place where Jews were sent for deportation during the German occupation can be seen in the piazza between Portico d’Ottavia and Tempo Maggiaore.

A plaque on one of the buildings reads: ‘On October 16 1943, here began the merciless rout of the Jews. The few who escaped murder and many others, in solidarity, pray for love and peace from mankind and pardon and hope from God.’ 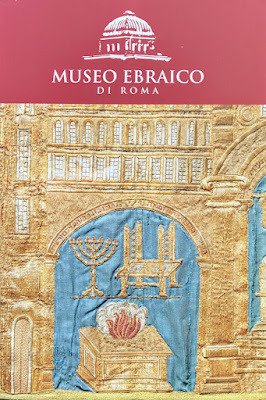 This is fascinating. Although I have spent long periods in Rome and I am ethnically Jewish, I have never visited the district. One for the 'bucket list'!