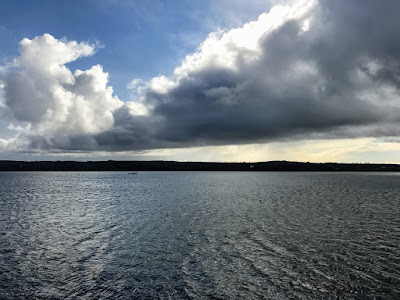 Standing on the shore at Tarbert Island on Sunday afternoon (Photograph: Patrick Comerford, 2017)

Although my new parish stretches right through west Co Limerick and north Co Kerry, and includes most of the south bank of the Shannon Estuary, after more than two weeks I have yet to go for a walk on a beach here.

However, after presiding and preaching at this morning’s celebrations of the Eucharist in Askeaton and Kilnaughtin, I went for a short walk along the shore and the coast in Tarbert, Co Kerry.

Tarbert sits in picturesque location on the southern shore of the Shannon estuary. Driving from Askeaton this morning, it is just 3 km inside Co Kerry from the Limerick side, and so Tarbert naturall sees itself as a north gateway to the Kingdom of Kerry and as a bridge between the south-west and the west of Ireland.The ferry at Tarbert also helps to make this place a hub to three major routes on the Wild Atlantic Way.

Tarbert has a rich natural heritage, and its coastline has two very fine bays – Tarbert Bay and Glencloosagh Bay.

Tarbert Bay, with its vast stretches of sheltered mudflats, offers an excellent feeding ground for the many species of birds that either live there or spend the winter there.

The bay is part of the River Shannon and River Fergus Estuaries Special Protection Area (SPA), the most important costal wetland site in Ireland that supports over 50,000 wintering wildfoul – making this site one of great ornithological interest.

Some of the interesting buildings and monuments around Tarbert include Kilnaughtin Church, where I was this morning, Lisloughtin Abbey, Tarbert Bridewell and Tarbert House, an early Georgian country house that is the home of the Leslie family.

Tarbert House dates from 1690 and was built by John Leslie. It remains the Leslie family home to this day, and is occasionally open to the public during the summer months. In the past, visitors to the house are said to have included Daniel O'Connell, Charlotte Bronte, Benjamin Franklin, Lord Kitchener, Winston Churchill, and Jonathan Swift. Last year, the house featured in the Channel 4 series Obsessive Compulsive Cleaners.

The name Tarbert comes from an Old Norse term meaning ‘draw-boat’ or a port for boats. From the town, we crossed a short isthmus to the nearby island of Tarbert, where a car ferry service runs from the island to the town of Killimer, near Kilrush in Co Clare, on the north side of the Shannon Estuary. This service, operated by Shannon Ferries, provides a link between the N69 in Kerry and the N68 in Clare.
Tarbert Lighthouse was built in 1831/1832 when Limerick’s trade with Europe was flourishing and Tarbert provided safe anchorage for vessels waiting to clear the Bowline Rock.

Before the coming of the railway, Tarbert also served as a landing place for passengers travelling from Dublin and Limerick to Tralee and Killarney. The Inland Steam Navigation Company built a stone pier here in 1837, and a new deep=water pier was built there in 1852-1858.

The island is also the location of a small electricity generating plant that opened in 1969. An explosion at the plant in 2003 that killed two workers and seriously injured another.

The plant was due to be de-commissioned in 2010, with the loss of 130 jobs, but was bought by the Spanish power company Endesa in January 2009 securing most of the jobs. The new owners plan to convert the plant to gas turbines and to secure the future of the plant for decades to come.

As the morning turned to afternoon, we stood on the shores of Tarbert Island looking across the Shannon Estuary to the shores of Co Clare, and back along the shores of Co Kerry and Co Limerick. We know there is much to see, explore and enjoy here as my new ventures here unfold. 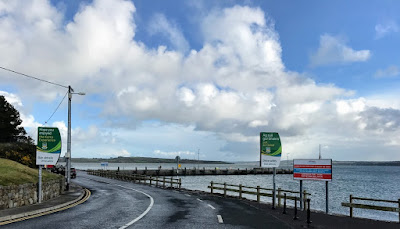 The ferry at Tarbert runs throughout the day between the shores of Co Kerry and Co Clare (Photograph: Patrick Comerford, 2017)

Posted by Patrick Comerford at 19:32

Just tried Commenting but it did not go so wIll try again Now. Just read this out loud to my mother over late breakfast. Thoroughly enjoyed it especially the information about the birds and the Spanish company taking over the electric plant on the island. very interesting. Looking forward to lots more!