A weekend walk along the shores of Lough Derg at Dromineer, Co Tipperary (Photograph: Patrick Comerford, 2017; click on image for full-screen view)

On the way back to Askeaton from Dublin on Saturday [13 May 2017], two of us left the motorway at Nenagh, and stopped at Dromineer, Co Tipperary, for a walk along the shores of Lough Derg, to look at Dromineer Castle, and for a light lunch.

Dromineer (Drom Inbhir ‘ridge of the river mouth’) is on the shores of Lough Derg on the River Shannon, about 10 km north of Nenagh. This is the heart of ‘Ormond Land’ and it is, perhaps, almost 30 years since I was in Dromineer, when I took regular boating holidays on the Shannon with a group of friends in the weeks after Easter in the 1980s.

Dromineer Quay and Canal store add to the attractions of the lake-side and the shore.

Dromineer is also home to the Lough Derg Lifeboat, the RNLI’s third inland lifeboat station and was the first inland station in Ireland. Onshore and offshore activities include sailing, kayaking, walking and cycling. 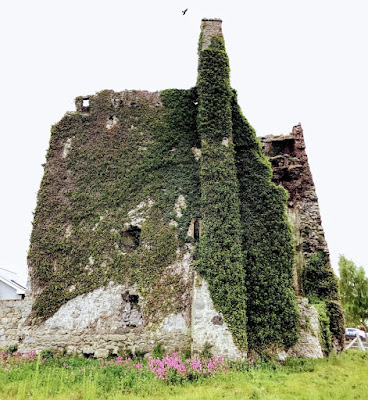 Dromineer Castle is an ivy-clad, ruined tower house dating back to the 13th century. It began as a hall house built in the 13th century by followers of Theobald Butler in the 13th century. The Anglo-Normans built hall houses to control and administer their new fiefdoms, and represent the first stage of castle building in Ireland ca 1180-1320. They functioned as satellite manors, and the hall-houses at Dromineer and Clohaskin, for example, provided financial and military support to the caput of Nenagh and acted as the fortified residences of the lesser Anglo-Norman lords.

The hall house in Dromineer was two storeys high at first, but two additional storeys were later added, and vaults were added to the ground floor. A base batter is part of the earlier structure.

By 1299, the Cantwell family were tenants, and Thomas Cantwell was paying taxes on the castle.

After the house fell into Gaelic hands, the tower house section of the castle was built before 1556 by the O’Kennedy family. The conversion to a castle or tower house gave an unusual rectangular shape to the castle, which measures 11 by 15 metres, and many of the windows were modified. 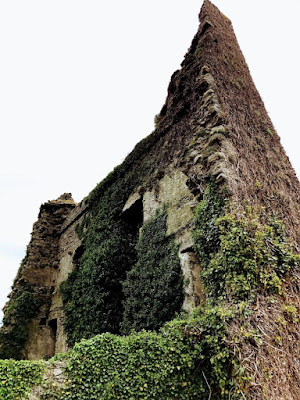 In 1576, Dromineer was transferred by the O’Kennedy’s to the Butlers, Earls of Ormond, who let the property out initially to Patrick Purcell, and the Cantwell family returned in 1582. On 15 May 1597, the Manor of Dromineer in Lower Ormond was granted to Thomas Cantwell of Cantwell’s Court, Co Kilkenny.

During the Irish Confederate Wars in 1641-1653, Dromineer Castle was held by the Cantwell family. The Cantwells did not take part in the rebellion, and supported their patron, James Butler, Earl of Ormond, as commander of the royalist forces.

The Civil Survey of 1654-1656 describes the Manor of Dromineer with its manor courts, an old castle, six thatched houses, and 14 cottages and that the castle had been in the hands of John Cantwell of Cantwell’s Court, Co Kilkenny.

Dromineer Castle was returned to the Ormond Butlers after the Caroline restoration in 1660, and in 1661 Butler became the Duke of Ormond. By 1665, John Parker was living at Dromineer, and he appears to have been an agent or employee of Ormond.

Dromineer Castle continued to be inhabited until 1688. But the castle fell into ruin in the late 17th century. It was sold by the Butlers of Ormond in the late 19th century.

In 1908, Dromineer Castle was described as a mass of dislocated masonry. The Commissioners of Public Works decided it was ‘not a structure possessing any features, or of such historical interest as to justify it being maintained as a National Monument,’ although they conceded that it was ‘a picturesque landmark on the Shannon it is not desirable that it be removed.’

Today, Dromineer Castle looks like an empty shell. It is covered in ivy, and most of the west walls have fallen into ruin. Parts of the bawn wall surround the castle in places, and some remains of the large quadrangular windows survive from the 17th century, along with other architectural features. But the castle is only accessible through a private garden, and I could only walk around part of the ruins.

Local residents and members of An Taisce in North Tipperary, have formed ‘Cairde an Chaisleáin’ or Friends of Dromineer Castle to help remove the ivy and conserve the castle. 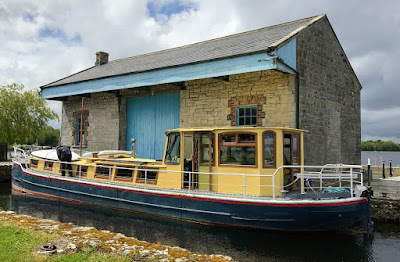 The Canal Store in Dromineer was built in the early 1850s (Photograph: Patrick Comerford, 2017)

Meanwhile, in the 19th century Dromineer became the port of the North Tipperary, and at its height was the centre of commerce and commercial traffic for the area, thanks to canal barge traffic from the mid-19th century on.

In the early 1850s, the Grand Canal Company built the Canal Store to facilitate this traffic and trade. From Dromineer, goods and merchandise were taken by horse and cart to Nenagh and other towns in the neighbourhood, while much of the agricultural produce of the area found its way to Dromineer, and was then brought by lake, canal and river to the markets in Limerick and Dublin, and even further afield to Liverpool, Braford and Glasgow.

The commercial importance of Dromineer was challenged only with the arrival of the railway to Nenagh in 1863. But for over 100 years the Canal Store in Dromineer was at the heart of commerce in this area, carrying goods and people. Trading continued until 1950, when the Canal Store closed, although barges continued to ply between Limerick and Dublin until 1960.

After walking along the lake shore and around the castle ruins, we had lunch in The Lake Café, which is part of Lough Derg House, a guesthouse and hostel, and from a table with a window view we watched the early summer activities on the lake. 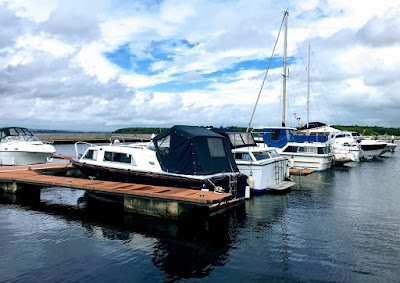 The marina at Dromineer in early summer sunshine at the weekend (Photograph: Patrick Comerford, 2017)