The Locke Bar … a river-side setting with many associations with the war poet Robert Graves (Photograph: Patrick Comerford, 2017)

Last week, on my way between Askeaton and Dublin, I stopped for lunch in Limerick at the Locke Bar on George’s Quay. This is one of Limerick’s oldest pubs, dating back to 1724, and it is close to Saint Mary’s Cathedral and other historical and architectural landmarks in the city, including King John’s Castle, the Hunt Museum, the courthouse and Barrington’s Hospital.

This award-winning pub sits in an attractive setting on a tree-lined quay overlooking the Abbey River. The old wood panelling and open fires make it is welcoming in winter; the sunny riverside setting is a delight in summer.

The Locke Bar has won many awards, including Black and White pub of the year, Irish Music pub of the year and Dining pub of the year, and it is also listed in Georgina Cambell’s best places to eat. In the sunshine last week, as I sat outside at lunchtime, I could have been in London, Paris or Rome.

I was first tempted to stop here not to drink or to eat, but because of the Locke Bar’s association with the poet and writer Robert Graves (1895-1985), who had many family connections with Limerick. 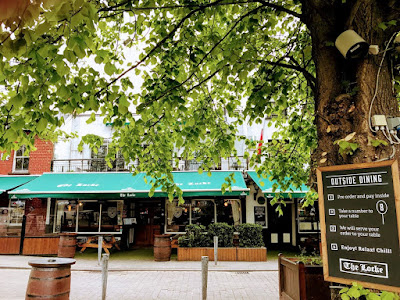 The Locke Bar … has many associations with the war poet Robert Graves (Photograph: Patrick Comerford, 2017)

Towards the end of World War I, while he was recovering from life-threatening war wounds, Graves and other officers and soldiers from the Royal Welch Fusiliers were sent to Limerick in 1918, as the War of Independence intensified. Graves frequented the Locke Bar while he was stationed in Limerick in 1919-1921, and his friend the war poet Siegfried Sassoon was stationed in Limerick at the same time.

It was an interesting posting, for Graves’s grandfather had been the Bishop of Limerick two decades earlier and is buried in the churchyard at Saint Mary’s Cathedral.

Charles Graves (1812-1899) was Bishop of Limerick, Ardfert and Aghadoe, President of the Royal Irish Academy, and Dean of the Chapel Royal in Dublin Castle, and a grandson of Thomas Graves, Dean of Ardfert (1785) and Dean of Connor (1803).

As an undergraduate, he played cricket for Trinity and later he was a fellow of TCD (1836-1843) and Professor of Mathematics until 1862.

In 1860, he was appointed Dean of the Chapel Royal in Dublin Castle, and in 1864 he became Dean of Saint Brendan’s Cathedral, Clonfert (1864-1866), succeeding Robert Mitchell Kennedy, grandfather of another war poet ‘Woodbine Willie,’ the Revd Geoffrey Studdert Kennedy (1883-1929).

Charles Graves became Bishop of Limerick, Ardfert and Aghadoe, in 1866, and held this position until his death in 1899. As bishop, his official residence was the Palace in Limerick, but from the 1850s he lived mainly at Parknasilla House, Co Kerry, which he sold in in 1894. Bishop Graves died in 1899 and is buried in the grounds of Saint Mary’s Cathedral. 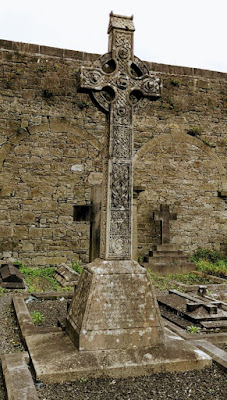 Alfred Graves was a poet and Gaelic scholar who played an important part in the Irish literary revival. His first wife, Jane Cooper (1874-1886), was from Cooper’s Hill, Co Limerick. He is best remembered as the author of Father O’Flynn, a comic ballad eulogising a fictional Donegal priest. Perhaps it is no coincidence then that his son Robert Graves in his war memoir also wrote admiringly of Roman Catholic chaplains, at the expense of their Anglican counterparts.

The poet, novelist, critic and classicist Robert von Ranke Graves (1895-1985) was the author of more than 140 works, including poems, translations and interpretations of the Greek myths.

Graves was born in Wimbledon, the third of five children of Alfred Perceval Graves (1846-1931) and his second wife Amalie von Ranke (1857-1951), and was educated at Charterhouse and Saint John’s College, Oxford.

At the outbreak of World War I, he enlisted immediately, and took a commission in the Royal Welch Fusiliers. He developed an early reputation as a war poet and was one of the first to write realistic poems about experience of frontline conflict. Through Siegfried Sassoon, Graves also became a friend of another war poet Wilfred Owen.

At the Battle of the Somme, Graves was so badly wounded by a shell-fragment through the lung that he was expected to die and he was officially reported in 1916 as having died of his wounds.

Graves was moved to Limerick in December 1918, and was stationed at Castle Barrack. He was struck by the horrendous poverty he saw in the city that winter, and he said Limerick looked like a ‘war-ravaged town’ even in peace, with ‘holes like shell-craters’ in the main street and many of the buildings seemingly ‘on point of collapse.’ 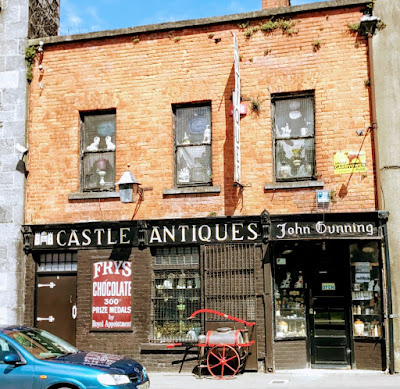 He added: ‘Old Reilly at the antique shop who remembered my grandfather well, told me nobody in Limerick built new houses: the birth rate was declining and when one fell down the survivors moved into another. Everyone died of drink in Limerick except the Plymouth Brethren, who died of religious melancholia. Life did not start in the town before nine in the morning.’

He recalled later: ‘Once, at about that time, I walked down O’Connell Street, formerly King George Street, and found it deserted. When the hour chimed, the door of a magnificent Georgian house flew open and out came, first a shower of slops, which just missed me, and then a dog, which lifted up its leg against a lamp-post, then a nearly-naked girl-child who sat down in the gutter and rummaged in a heap of refuse for filthy pieces of bread; finally, a donkey began to bray. I had pictured Ireland exactly so, and felt its charm as dangerous.’

That January, Graves played his last game of rugby in Limerick as fullback for his battalion against a local team that included many Sinn Féin supporters: ‘We were all crocks and our opponents seemed bent on showing what fine fighting material England had lost by withholding Home Rule. How jovially they jumped on me, and rubbed my face in the mud!’

During this time in Limerick, Graves frequented the Locke Bar on George’s Quay and also visited his father’s brother-in-law, Robert Cooper of Cooper’s Hill, Limerick, a retired naval officer. 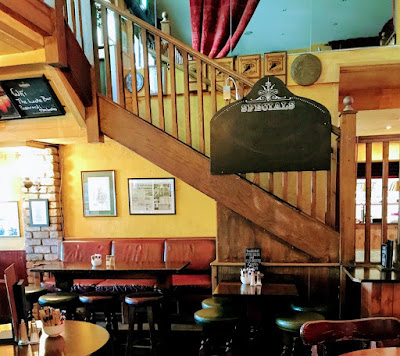 Robert Graves frequented the Locke Bar while he was stationed in Limerick almost a century ago (Photograph: Patrick Comerford, 2017)

Shortly after Graves arrived in Limerick, demobilisation began, but it had been deferred for the troops in Ireland because of the War of Independence. This became a more acute problem when Graves caught Spanish ’flu. This compounded his injuries and lung problems and it became a bigger threat than Limerick’s republican rugby players.

Unwilling to trust his lungs to a local hospital, he caught the last train out of the city before the demobilisation period ended. Officially, he a deserter. However, a chance meeting in a London taxi with the Cork District Demobilisation Officer gave him the documentation he needed. Safely back in England, he recovered from the ’flu, unlike millions of others.

After the war, Graves took up the place he had been offered at Oxford, where his post-war friends included TE Lawrence, then a Fellow of All Souls’ College.

Perhaps it was his memories of Limerick and his Irish ancestry that inspired Graves to use an Irish pseudonym, John Doyle, when he published The Marmosites Miscellany (London: Hogarth Press) in 1925.

In 1926, Graves took up a post at Cairo University. A year later, he published Lawrence and the Arabs (1927), a commercially successful biography of TE Lawrence.

His autobiographical Good-bye to All That (1929) was a success but cost him many of his friends, including Siegfried Sassoon. The book’s critics included his Dublin-born father, Percival Graves. His own autobiography – To Return to All That – was a response to his son, castigating him for ‘his bitter and hasty criticism of people who never wished him harm.’

In 1934, he published his most successful work, I, Claudius. Later, from 1961 to 1966, Graves was Professor of Poetry at Oxford. During that period, Graves was on a shortlist of writers considered for the 1962 Nobel Prize in Literature, along with Lawrence Durrell, Jean Anouilh and Karen Blixen, but the prize was awarded to John Steinbeck.

For most of his life, Graves lived in Majorca. In May 1975, he returned to Limerick to visit his grandfather’s grave at Saint Mary’s Cathedral. His visit was arranged by the poet John Montague and Garech Browne of Claddagh Records, and he was guest of the Knight of Glin at Glin Castle. In Saint Mary’s Cathedral, he was welcomed by Dean Walton Empey, later Archbishop of Dublin, who told him of his grandfather’s contribution to the restoration of the cathedral.

Graves was among 16 Great War poets commemorated on a slate stone unveiled by Ted Hughes in Poets’ Corner in Westminster Abbey on 11 November 1985. The inscription on the stone was written by Wilfred Owen: ‘My subject is War, and the pity of War. The Poetry is in the pity.’ Of the 16 poets, Graves was the only one still living at the time. The other war poets honoured included Wilfred Owen and Siegfried Sassoon, but not ‘Woodbine Willie.’

The Locke Bar has hosted celebrations of Robert Graves organised by the Limerick Writers’ Centre, and in 2014 the centre unveiled a commemorative plaque to Graves at the Locke Bar … he would have been amused that the name of his regiment, the Royal Welch Fusiliers, is misspelled. 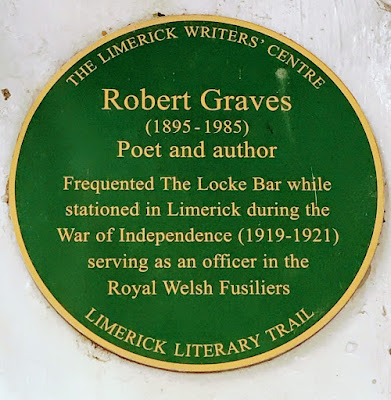 The plaque unveiled by the Limerick Writers’ Centre in 2014 (Photograph: Patrick Comerford, 2017)